Action Comics #380: “The confessions of Superman” 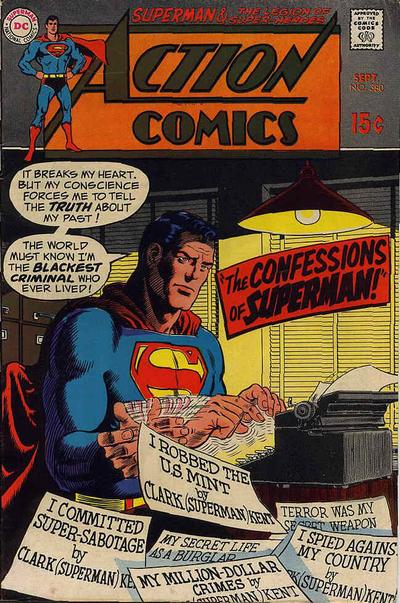 Superman must have one long rap sheet given all the crimes he has ever committed.

The cover: For all of you who need more proof that Superman is really just a super-jerk, look no further! The man of steel himself is admitting to all of the crimes he’s committed. He even calls himself the blackest criminal who ever lived, I don’t even want to touch any potential jokes that could come out of that one. Why he admits to treason, we will never know, as isn’t treason worthy of execution? So is he admitting so he can just laugh in their faces as they try to execute him? Regardless, let’s dive into the meat of this issue and see why Superman is acting like such a jerk…this time.

The Story: What’s the first thing we see? Superman laying on a metal table being chained to a table by Supergirl, so that they can see if he flies away in his sleep. But why are they doing this? Well to find out, we jump back to the planet Wexr II which is inhabited the Superman Revenge Squad. Why is the planet named Wexr II? They probably blew up Wexr I building a doomsday weapon for Superman. We jump into the middle of some kind of Royal Rumble elimination tournament for criminals where a husband and wife team called the Liquidators use their Judo Force beams to defeat their opponents and win the right to destroy Superman.  If these guys are the Superman revenge squad and hate the guy…why not have everyone dogpile him instead of sending a husband and wife team in Superman knockoff costumes? After the leaders of Wexr II congratulate them on their victory, they proceed to give them a metal box with instructions on how to defeat Superman. Taking off in their Frisbee ship, the Liquidator team flies to the Fortress of Solitude where they spy on Superman’s collection of Red Kryponite and compare it to the weapon in the box . They then open their own box to find their own piece of Red K which conveniently has a label on it which explains why it does…so why did you guys go through the trouble of spying on Superman to examine his samples of Red K when yours has its very own instruction manual! Zooming towards the Iwo Jima War memorial, the Liquidators used a machine to remold the memorial into the image of Superman and make it seem like he did it himself. Later on, the criminals break into the Metropolis Mint to destroy all the coins inside, leaving only coins imprinted with Superman’s picture or symbol on them. At this point, Superman is beginning to have doubts about his own innocence. Flying away, Superman arrives at his Fortress of Solitude to find Supergirl waiting for him. Letting her inside, Superman places himself into his Red Kryptonite detector and asks Supergirl if he is glowing red when it is turned on. He clearly glows red but Supergirl lies to him and tells him he is perfectly normal. At which point the caption below asks why she is telling such a Super-lie! Supergirl then goes on to tell Superman that the only way for him to prove his innocence is to chain himself for the night and if the chains break it means that he has left the fortress and committed all of these crimes. When Supergirl flies away, it turns out that she is one of the villains dressed up as Supergirl and she somehow managed to fool all of Superman’s super-senses. All she did was wear a wig and costume, is this incompetence the reason he thinks no one knows he is Clark Kent? But she reveals her diabolical plan of putting chemicals on the chains when they break.  Awakening the next morning, Superman finds the chains broken and turns on his tv to find that someone; probably him has wrecked Mt Rushmore and carved his face into it. Convinced of his own guilt, Superman flies to the Daily Planet and begins typing detailed confessions of his crimes. Yes, he somehow writes detailed confessions of crimes that he doesn’t remember committing. So we’ll just toss Super-Imagination onto his list of superpowers.

Flying back to his Fortress of Solitude instead of leaving the planet like the Liquidators thought they would (I bet you forgot that the villains were called the Liquidators!), Superman prepares a box of Gold Kryptonite which conveniently has the effects written right on the lid for anyone else other than him who enters his fortress and looks around for stuff. As he prepares to open the box we….TO BE CONTINUED in the next issue.

Rating: 9/10 We do get Superman sitting at a desk writing confessions for crimes that he believes he committed but some of the crimes are never shown! We demand to see Super-sabotage, burglary and terror being a secret weapon!