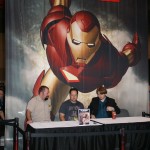 Our good friends at Two A$%^%$ talk about Nerd Stuff were lucky enough to get an exclusive sitdown interview with Marvel’s Editor in Chief Joe Quesada. Wikipedia informs me that Quesada “is an American comic book editor, writer and artist… [who] was born in New York City to Cuban-born parents and grew up in the Jackson Heights neighborhood of Queens.  [he] became editor-in-chief of Marvel Comics in 2000.”

During that time Joey Q has brought us many large events and no shortage of division among the fan community. He’s responsible for breaking up Peter Parker and Mary Jane’s marriage, killing Captain America as well as being involved in the creation of three successful imprints Marvel Knights, MAX, and the Ultimate line. Joe is a affable and very funny guy, he talks to you like you were an old friend. He’s a pretty fun interview.

Joe Quesada sat down with Brent and Adam at the Marvel booth at Hobby Star’s Fan Expo. Whom were good enough to let us transcribe it for them. They really are jerks.

TATANS: This is a question from someone that I’ve worked with, and someone you’re working with right now, and it goes: “Feel free to ask him what he was thinking when he green lit the spider-man clone saga the writer’s cut even though it’s is an exciting and brilliant example of comic book writing at it’s best.” That comes from our friend Howard Mackie.

Joey Q: [laughter] Howard should know this, the reason we approved this is because it’s seems like a real fun thing to do. One of the interesting aspects of the Clone Saga – while fans love to complain about it, say whatever they want –  it was arguably the most popular and best selling Spider-Man event of all time. And because of that, it became a victim of its own success. I talked to Ralph Macchio about the history of this, and Tom Defalco about the history of this and one of the problems with the Clone Saga was that the actual idea of the Clone Saga was a really good one, a great story idea. But invariably what happened was that Marvel – being a public company and always wanting to up the numbers from the previous year’s numbers (and unfortunately this was happening around the time that the industry was starting to decline) Spider-man was one of the few things that was going up in numbers – so rather than have the Clone Saga end where Tom and Howard had it planned to end corporate sort of came in and said: “keep it going, do not end this thing.” So they did. So the story went beyond where they had originally planned to the story to go and it really didn’t end the way they wanted it to end. So we figured – let’s  give these guys the opportunity to tell the story the way they wanted to tell it. I think it’s a really fun aspect of this. Not only that I put ‘Clone Saga’ on anything  and it sells through the roof – whether it’s Ultimate Spider-man or reprints of the original story people want to read about the clone saga. 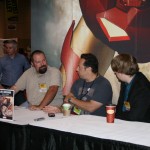 Joey Q: It sold like crazy. Do you know how many requests I get for Ben Rielly these days? It’s insane. So, as much as people love to complain it was a hugely successful storyline for Marvel.

TATANS: I can’t fault sales. When it comes down to it, it’s a business as well as art.

Joey Q: Well, if Howard wants me to change my mind I can do that. [Laughter.] I can do that right here if you twist my arm.

TATANS: Well, Howard’s a buddy of mine…

Joey Q: So do you get a royalty check then?

TATANS: No. [laughter] So going on we have to ask this – cause I got a couple of people asking me – and I know what the answer will be cause it’s gonna be the same as the last couple of times; You’ve got Marvel Man – what are you going to be doing with it.

TATANS: You can’t tell us?

BRENT: I kind of figured that –

Joey Q: These announcements will come.. uh, shortly. We want to be very, very careful with the character – it’s got a fantastic history. The only thing I can tell fans is, look you’ve waited all these years with no hope – no hope! Zero chance. Just be a little patient. At least now you have hope and there’s an end at the horizon where you might see what you want to see – that’s all I’ve got to say.

TATANS: One of our listeners asks “What’s with all the huge crossovers?” Is this something that’s going to continue or are we going to branch off into smaller inter-book crossovers like just the x-books.

Joey Q: Yes. Come next year we’re going back to smaller stories within character families, As opposed to the gigantic universe spanning crossovers. So we’re going to do that for just a year, because number one: the fans need a break, the creators need a break and we in the editorial need a break because to do these big events takes a lot of man-hours, man-power and it is exhausting on the staff, on the creators and especially on the fans – so yeah, so we’re going to take a little bit of a break but you’ll still see smaller events within families of characters.

TATANS: So in your opinion what are some of the best titles that Marvel is putting out right now? What are your favourites? I know it’s sort of like Sophie’s choice.

Joey Q: It’s a really tough one to choose from because there really is a bunch of stuff going on. I love what’s happening in Spider-man right now. We have a couple things on the horizon that nobody knows about yet that we’re working on that are getting me really excited. But I really think that the storyline that’s coming up after Dark Reign is going to be amazingly exciting and is really going to usher in a new era of Marvel, I can’t really talk too much about it, but more news on that stuff is going to be coming out soon.

TATANS: Awesome. With that the book that I’m really looking forward to and it really ties into the next question which sort of went away and now is back again and that’s that Deathlock is back and you have Charlie Huston writing him.

TATANS: I was really happy about that announcement, but that brought up another question and that was: Does that give us hope to ever seeing Eric Robertson’s Deathlock series that has yet to see the light of day.

Joey Q: At the moment? No. But the Charlie Huston series is going to be dynamite. Deathlock is one of my all-time favourite characters from when I was a kid and Charlie is really going to knock it out of the park.

TATANS: It seems like it’s his type of book y’know? His run on moon knight was great.

TATANS: And I’ve been waiting for him to pop-up somewhere else. Now is that going to be in Continuity or…

Joey Q: Wait and see.. Come on, I gotta sell some books here.

TATANS: Now, when are we going to see something useful out of all the really crappy Canadian superheroes that have been coming out. You know what I’m talking about… basically everybody other than Wolverine…

Joey Q: You never know what’s going to happen. Every so often a pitch comes across my desk that I think: “Y’know that pitch took a bunch of characters that I thought really couldn’t be players, but turned them into players.” And stuff like that happens all the time. Right now I have nothing in front of me saying – hey yeah, we can do this.. nothing yet. I mean, I never say never but right now? Nothing yet. 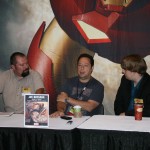 TATANS: Another question from one of our people: Is there anything about your term as Editor in Chief that you regret or that you’d do differently? Because you’ve been in the spotlight now for a while…

Joey Q: …Almost ten years. In January it’ll be ten years. And no.. not a single thing. Because whether they were successes or failures Everything sort of I think that lead a person to where they are in that life and I think Marvel is in an incredible place and I’ve had a great run – a fun run that’s for sure. But I think the mistakes you make down the road are more valuable than the successes you’ve had especially if you’ve learned from them. So from the beginning of my tenure to now, I wouldn’t change a thing of it. Not a single thing of it.

TATANS: I can’t argue with that answer.

Here’s the end of part one. Part two will be coming at you later this week!