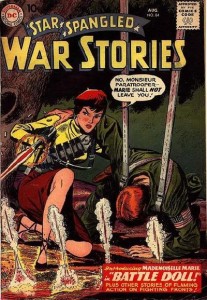 Mademoiselle Marie was a French farm girl who joined the resistance to fight the Nazis during WW2, often alongside Sgt. Rock. Her father died in her arms on their first mission and left her in command of the local resistance movement. This comic is very elusive and sells to DC War fans, good girl art fans and key issue fans alike.

Interestingly enough there are only 2 copies graded higher than a 6.5 with the best graded copy getting a 7.5 grade. Only 4 copies exist above the 6.0 CGC grade.

Strengths that make this comic a good long term investment are;

-This comic is a first appearance and thus a key issue