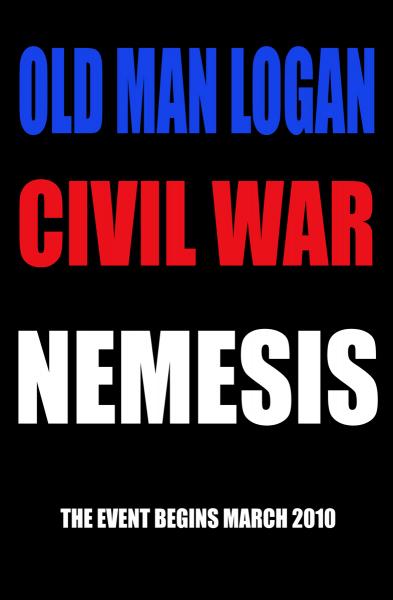 So while nothing is definitely known just yet. It seems like we have more to look forward to from the quite-often-really-late-but-it’s-okay-because-his-artwork-is-so-beautiful-that-no-one-really-wants-to-complain Steve McNiven and some british writer named Mark Millar.

While nothing has been announced on this yet – outside of the name (Nemesis) and the creative team – I’m sure it’s not going to stop people from speculating. Millar himself mentioned some of his upcoming projects when he was interviewed by Comic Book Resources a few months back: “There’s three new creator-owned projects I want to get out over the next twelve months. The first one will be out about the new year. I expect the next one around summer all with really huge artists. Leinil Francis Yu and I are talking about something. Steve McNiven and I are talking about something. McNiven and I have got a Marvel project as well. And Dave Gibbons and I are talking about something, which is really exciting. But I also want to do “Kick-Ass 2” because, my God, the movie’s coming out and I’d be stupid not to capitalize on it. Also, it was always planned at three books, so I’m dying to get into the next one.“

Millar has long been a PT Barnum type huckster when it comes to his projects, often hyping up projects month in advance with next to little information. He put this on his forum a while back: “I was out with my mates last night and came in drunk, logging onto email and literally gasping when I saw the artwork. Steve has modified his style again and I’ve never seen anything like it from him. It’s much more Travis Charest, but he’s brought something entirely new to this too. The level of detail is just insane.“

He described the project as thus:

I’m basically wanting to borrow the family car for a little while, take it on the scariest ride ever and hopefully hand it back in one piece.

More on this as news breaks.