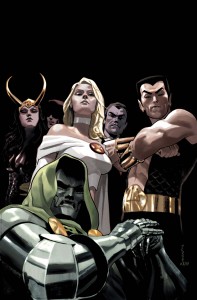 I know, you’ve gotten me twice this week, how lucky you are.

To be fair, basically what occurred was the following. I got a message from Pete DeCourcy about discussing some stuff about my column.  When I got to Comic Book Daily HQ…well things were a bit odd.

Written everywhere along the walls were the initials MM followed by numerous names of fictional characters that use those initials.

“YOU!” Pete screamed from a corner, “Write about Osborn’s mystery person! This MM! DO IT!”

With that he flung a Frank Miller Daredevil omnibus at my head which I barely ducked, and headed to work on the column in front of you.

Do you blame me? Those omnibuses could crush small children, he was picking up a Fantastic Four volume when I ran for it.

So Marvel’s latest mystery is who is Osborn’s mystery man that’s keeping the Cabal in check.  A lot of theories, not a lot of answers.  I’m going to take a look at a few of the front runners.

Marvelman
A lot of people seem to think this is Osborn’s secret weapon.  He is a character that could keep everyone else in line due to his power level and he’s a recently acquired marvel character that has yet to debut and this would be a rather splashy way of doing it.

But alas, this theory has a few holes.

Hole number one is the simplest.  It’s way out of character for everyone.  Marvelman has never existed in the Marvel universe. None of the characters involved in Osborn’s merry band of evil would have any clue who the dude in blue tights is let alone fear him.  For that matter, neither would Osborn.  Beyond that, it would also be out of character for Marvelman to sign up with these guys. Besides that, when last we saw Marvel Man he was more or less a god, there isn’t much about the Marvelman/Miracleman series that I remember having anything that Osborn could use as a bargaining chip with Marvel Man.

If Marvel has reprinted the old Marvelman material, I could maybe see it but so far that has yet to happen.

A character more suited to the story and Bendis does have a habit of bringing back forgotten characters and making them bad ass.

Not that this guy needs it.

For those who are unfamiliar with this Fantastic Four villain… he is essentially a Cosmic Cub in human form.  He can create galaxies.  He is that level of power. Dr. Doom and the others would be familiar with him (due Secret War, etc) and would understand that he could wipe out the planet if he wanted.  But could Osborn hold something over him to keep him in check?  Maybe, he is human and has human ties.
Mephisto

An early front runner but much like Marvelman, I don’t see him falling in with Osborn.  Unless it’s to screw with all of the mortals.  I definitely don’t see Osborn having any control over him.

Mr. Mistoffelees
It’s a long shot but come on, he’s a dancing, singing human sized cat! How would anyone not be afraid of that? And all Osborn would have to do is offer up Tigra.

Brent Chittenden is a Canadian based freelance writer. He is the co-host of Two Assholes Talking About Nerd Stuff. When he isn’t writing, he’s looking for work and building a shed….in the woods.