Ladies and gentlemen, welcome back once more to the Comic Book Daily creator profiles. This time around we have an interview from the Toronto Fan Expo with the new artist for Fantastic Four; Dale Eaglesham. Conducted by our very own Editor in Chief’; Pete Decourcy; the handsomest Pete who will dance for quarters in all of the Americas, they talk style, breaking into the business, materials and more. Follow the link below for the mp3 audio of the interview or read the interview as transcribed by the always humble and amazing David Diep.

CBD: So, first off, you’ve had a very long and storied career. You’ve probably worked for both sides of the table as well as Dark Horse. So my question is: Being how you started in the eighties right before the internet, how did you get out there and get your stuff going?

Dale: In those days, there were long circuitous routes. If you went to cons you would meet various personalities and editors. That’s probably the best way in, but at the time I was not going to cons. I was just some shy kid working out of his room that I never left there. But a friend of mine brought some of my art to a comic shop and someone who was working for Marvel at the time walked in. It was Jeff Isherwood; he liked the stuff and offered to bring it to Marvel with him just to show it to them. That was the end of his role and basically from that point on, I was submitting a lot of samples often. I would make up stories, draw them, send it in and they would be “it’s not good enough, it’s not good enough”. But at a certain point they said “this is what we’ve been waiting to see. So they started giving me pinups to do.

Dale: My whole reason for getting into comics was to do Conan.

CBD: Oh cool, I did not know that (Asst. Ed. Note: Pete is so on the ball that he did know that, but he didn’t want to ruin the moment)

Dale: Yeah, so I worked my way up to Kull stories, back up stories and then I got a 250 page Savage Sword of Conan. And then unfortunately there were editorial changes in the department at that time and I just stopped getting work from the department and that was my swansong for Conan. But that’s basically how it all got started.

CBD: It kind of seems that with your JSA run and now Fantastic Four, it seems that you’re the go to guy at least right now for epic family based stories.

CBD: How big of a goal is it to work on Fantastic Four? I don’t know, when I think of the a-list for comic lovers, Fantastic Four is kind of it and so is the JSA.

Dale: For sure it is. When I think comic books, Fantastic Four obviously comes to mind and there’s a reason for that. I haven’t been following Fantastic Four over the years, but I grew up reading the Jack Kirby, Stan Lee original run. So in my formative years (Flash Fact: formative means “growing or developing”) when I was just starting to draw comics as a child that was influencing me quite a bit. And so it’s kind of like- to be on the same book now, it’s kind of like meeting Santa Claus, I mean it’s really weird and a little daunting at first. It was the first time I think, getting onto a title that I was actually nervous and it was really uptight with the drawings because more than any other book, that one really meant a lot to me going way back to my childhood. 40 years before, I had been reading this book and now I am on it. It’s strange.

CBD: Do you have any specific goals about what you want to do with Fantastic Four?

Dale: Specifically I set out to bring back the Kirby Reed. I know he started off with a thinner Reed, he chose a more robust Reed. The Buscema Fantastic Four Reed also, I remember those also as well. I think I wanted to swing things back that way as well. I wanted a more heroic Reed, a more commanding Reed who could be a little frightening if he wanted to be, ya know?

CBD: I was going to say he really does look like Indiana Jones, like the Steranko concept art poster.

CBD: And that’s what it really looks like. And it’s really exciting to see. Reed Richards has always been one of my favourite characters. And I think in general, he’s always been written off as this brainy guy who is absentminded. But the first issue very much paints him as a kind of proactive almost, ya know? (Everyone is jumping onto the ya know? Bandwagon!)

Dale: Yeah, I wanted him more robust, very Indiana Jones-like, an adventurer, I wanted that sort a bit of swashbucklery in him and really I approached him by asking myself; If Frank Frazetta drew Reed Richards, what would he look like? So really, I saw the short sleeves right away, the hairy forearms, and you know, you can logistically look at it and say he’s a rubber guy and these things wouldn’t happen or say he wouldn’t have stubble I dunno, but- 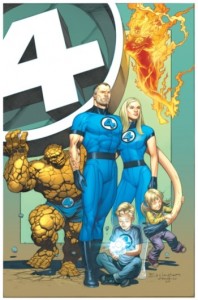 Dale: He’s great. He’s kind of new at this, know what I mean? But his ideas are great, they’re profound, he’s very cerebral in his approach but at the same time he can get down and dirty into the action with the super bad guys and he’s got all kinds of wild stuff planned. We’re not gonna try and do big overreaching story arcs I don’t believe. It’s gonna be shorter adventures.

CBD: So more in the tune with the original Kirby stuff. You’ll probably plant seeds but —

Dale: Yeah, all across the board we’re just trying to swing it back to the Silver Age and hopefully people are really going to enjoy that.

CBD: That’s really cool to hear. So this is actually from one of your fans. What materials do you use when you’re drawing?

Dale: What materials do I use? Just an HB pencil!

Dale: I buy my own paper. It has to be smooth stock, I don’t like drawing on rough paper. And so it’s always a bit of a problem finding the right pencil because we’re shooting from the pencil, so you really want to keep the art clean as it tends to get smudged really fast and when you’re scanning it into high DPI, every smudge shows up. And that’s a lot of extra work for Paul Mounts; the colourist who is doing a spectacular job. So that’s it, I actually have a piece of paper with a square cut out of it that I place on the drawing to do various parts of the panel. Not before I set the panel up first but to do the details so it’s not a completely black smudge by the time I’m done. It’s always these little things. [Laughs]

CBD: Are there any characters you want to work on in the future?

Dale: Ka-Zar would probably be my number one choice.

Dale: Well hey, if they still had Conan, I would say Conan. But you know at DC I was working-angling my way towards the Warlord book, I really really prize that.

Dale: I love it. Anything that is fantasy related that doesn’t require reference for buildings or text like that. It’s just straight up drawing in your head. Ka-zar is an immense concept and I would really like to sink my teeth into that.

CBD: In a way, it feels like he is due for a big comeback.

Dale: Yeah I think so.

Dale: It’s a really fascinating sort of environment that he lives in and that we can access it from this world. It’s just that so many things can happen and it’s prime prime stuff. It’s got dinosaurs in it, you can’t go wrong. [Laughs]

CBD: [laughs] Maybe you can get Devil Dinosaur in there too. Wait, is that Marvel or DC? [Laughs]Getting back to Fantastic Four for a second though, I was reading the blog for a couple of days now, and your wife is an incredibly important part of your work. How much of that is going to be reflected in how you portray Sue?

Dale: Ah, in what sense?

CBD: Are you going to try and incorporate maybe how important she is to you or something along those lines?

Dale: Yeah, I think so. I really think she’s helping me with the character of Sue. Who I’ve said in many interviews; she is the anchor of this team, she is the rock. Not Reed Richards. Reed Richards is the star of the team but she is the one that keeps it all together and Lou, my wife does the same for me. She just keeps me functioning. Keeps me sane, which any artist will tell you, you are on the cutting edge all the time. There is so much going on and she does so much, especially at a convention which allows me to sit down and work. You can’t put a value on that, you really can’t.

CBD: I totally understand. well thanks so much for your time. I really appreciate this.