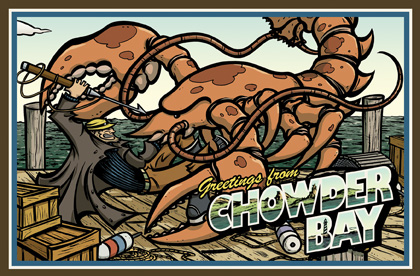 Working in a comic book store you get asked a whole lot of crazy questions – but one of the best questions I’ve ever been asked was ‘what is the most fun comic on the stands right now?”

That would be Salt Water Taffy.

I got turned onto this series by my co-worker who would rave about the lush heavy lineworks and the overrall sense of adventure that seems to permeate each and every page.

I was lucky enough to meet up with Salt Water Taffy creator Matt Loux at the Toronto Comic Art Festival, our interview (with questions from my co-worker, who felt she’d go ‘all screaming fan girl on him’ should she meet him) is below.

Pete DeCourcy: If you could, describe Salt Water Taffy. 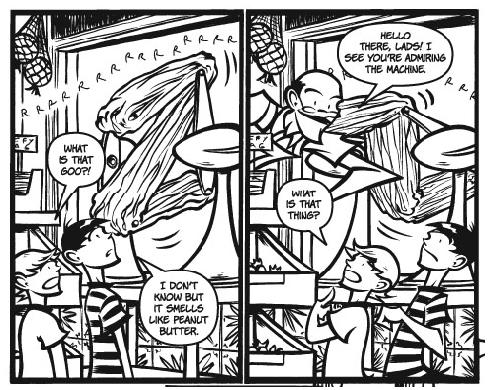 Matt Loux: Salt Water Taffy is an all ages series. It’s about two young brothers, Jack and Benny, and they’re on a summer long vacation to a mysterious seaside town in Maine called Chowder Bay. It’s all about the different adventures they get into in this town. They encounter sea monsters, or ghost stories, some treasure hunts and that sort of thing. It’s an ongoing series. There’s three volumes out right now with the fourth and fifth on the way.

PD: Since you have an older brother, how much of that relationship is the basis for Jack and Benny?

ML: Definitely a lot of it. Especially the root of it and even the look of the characters is based on my brother and me when we were kids. I’m a younger brother and my brother Jesse is about two years older than me but that’s just a kind of a starting point though. I’d say that we definitely had that sort of an adversarial relationship when we were that age. And when you’re on a vacation, you’re forced to be each others friend and hang out with each other whether you like each other or not, it always happens. There can always be a little clashing as it is with the characters in the book. So there’s definitely a lot of me and my brother in that.

PD: So Jack and Benny, the names, is that an homage to Jack Benny?

ML: Yes, it is. It’s kind of an organic homage, because I originally wanted to name the younger brother Benny and I figured I should just name the older brother Jack. It’s a little bit of an homage because I grew up watching, loving the old comedians – Jack Benny, Bob Hope, the Road movies. I love that stuff – the Marx Brothers and it’s kind of funny, because that was comedy to everybody then but it really speaks to kids I think. Even now kids love Marx Brothers. I loved that stuff. It was some of the first comedy I ever watched, that old stuff.

PD: Aside from the covers for the trades, SideScrollers, F-Stop, they are all in black and white. Have you ever thought about re-releasing some of these comics in colour?

ML: I would like to and if anyone else agrees with that, they should ask my publishers. A lot of it is that it’s expensive to do colour. We’re a small company but I would love to do it in colour someday. We’ve definitely thought about doing that. In the future that might actually happen. If you are interested in seeing Salt Water Taffy in colour write Oni Press and demand it. I actually do enjoy artistically working in black and white. 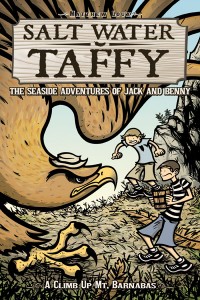 PD: There is so much vibrancy to your pencils, thick lines that convey speed and motion.

PD: I just finished Ode to Kirihito and there’s a lot of scenes where I can see that kind of thing.

ML: Cool. He did a medieval fantasy called Dororo that was just like that. It’s just gorgeous.

PD: You’ve sort of planted seeds and the books have tackled different adventures in each one whether it’s Old Salty or The Eagle or Dr. True. My question is are these all going to a larger arc or is each one a stand alone adventure?

ML: Each one is a stand alone adventure, but the characters are kind of building up. In the first three, there are some important characters that are pretty much the main characters, obviously Jack and Benny, but the old fisherman Angus is kind of their co-conspirator in all the adventures. Each one of the first three has its own character focus. The first one is about Old Salty, the second one is about Barnabus the giant eagle, the third one is about the ghost of Dr. True. There is some building to something. I really wanted to write them as their own stand alone stories but I do have a story that brings together a lot of these characters. I think it’ll still be accessible without having read them but it will be a richer experience if you have read them and know those characters. In the next one I’m doing right now, it’s still pretty much it’s own story

but it had more references to some of the older characters than the previous three. The new one is going to be called Caldera’s Revenge and it’s a two parter because it was too big of a story to fit into one book so we had to split into two. It’s going to be great. I’ll tell you the quick gist of it. There are mysterious shipwrecks that start to happen around Chowder Bay and no one really knows exactly what’s happening. So they go to investigate it and it ends up being a mysterious ghost whaling ship that shows up. There’s a whale that is kind of terrorizing the bay so there’s a bit of a mystery as to why he’s there and what’s the connection between the ship and the whale and some other characters. At one point Jack gets kidnapped by the whaling ship and asked to be the new ship’s boy on the ghost whaling ship. It’s going to be a really fun one. I’m working on it right now. I’ve already started the art and it’s really enjoyable. It’s going to be back to the ocean so it’s like a big seaside ocean style.

PD: Everything about your books is kind of fun. It’s like comfort food in a way. All the characters are great. You have such a great time drawing gigantic lobsters, huge eagles, murdering spirits.

ML: It’s a kind of a window into my mind. It’s the sort of thing that I wish life was like. It’s the sort of thing I like. I write stories that I would want to read. I have no problem not even explaining it but just having an animal just start talking to you. And then they don’t even react like it’s a noticeable thing. To me I just think that’s hilarious. 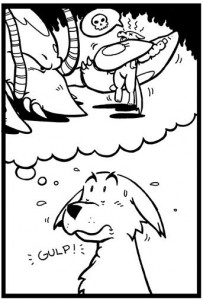 PD: Are we going to see something happen with the seagulls?

ML: Oh, the seagulls are coming back in the next volume. More for kind of a joke, more of a gag, not for any major plot purposes. That’s the thing, there’s a lot of characters that I ended up really liking and I want to find ways to try to fit them back. Right now my favourite character is Dan the Wolf from the second volume. For those of you who haven’t read it, he’s a kind of a foil, always trying to eat the boys but he’s really bad at it and he’s constantly getting foiled by either the boys or Angus. And Angus just ends up beating the crap out of him. We did a couple of web comics that my friend Brian Stone illustrated and it’s basically that same gag where it’s just Angus getting beat up all the time and that’s on the website at http://www.saltwatertaffycomic.com/ . I really want to find some more ways to fit him in. I did add him into the Free Comic Book Day story that I did this year so you’ll see a little bit of Dan action.

PD: Awesome. Well thanks very much for the interview and best of luck.