Over the years I’ve had the opportunity to interview a significant number of people.  For the most part, it’s been a solid and decent experience.  Sometimes it’s kind of business like and you get the answers in a cordial fashion.  Sometimes you get people who are tired and don’t want to be there.  And then on rare occasions you get someone like Max Brooks. 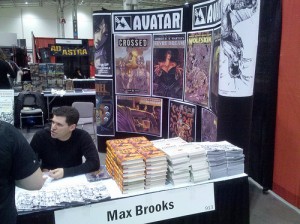 For those of you who don’t know the name, Max is the New York Times bestselling author of World War Z and the Zombie Survival Guide. He had spent time as a writer on Saturday Night Live (from  2001 to 2003) and also happens to be the son of film maker Mel Brooks and acting great Anne Bancroft.  Last year he began making his way into comics.  His first foray was with the Avatar published graphic novel Zombie Survival Guide: Recorded Attacks which is not only well written but features fantastic art by Ibraim Roberson. He’s following that up with a GI Joe series called Hearts and Minds.

Given his success as well as being the son of a Hollywood legends,  the first time Max and I did an interview along with my podcast co-host, Adam Grant (which you can listen to as part of last year’s Fan Expo episode found here), I went in with a little trepidation.

Which turned out to be totally unnecessary as Max is warm, funny, self deprecating and over all a really cool dude.  So when Wizard World Toronto rolled around, Adam and I made it a point to make sure we talked to Max.  A couple of hours later, we had the chance to sit down with him at Avatar’s booth and catch up on his current projects.  The following is a portion of the interview we did.

On GI Joe Hearts and Minds: 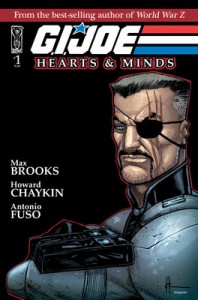 “…we’ve done five issues, they’re all written. Two stories per issue, each story has one Joe and one Cobra.  So basically they are like a day in the life or an up close and personal; it’s like what’s like to sort of get in the mind set of one of these guys. What does it take to be a Joe, what’s it take to be a Cobra and that’s where we’re going with this.”

How he got involved with the GI Joe comic:

“I wanted to get back into GI Joe and I was at an Avatar convention with Christos Gage, he writes for GI Joe and I said “Oh you write for GI Joe?” and he said “Yeah, they’d love to work with you.” And I said “Get out.” So I wrote a sample story. And I sent it to them. Just as an example as what I can do. They said we like the story so much you get your own mini-series.”  “I’m very proud of it and think it’s going to be very cool.”

From talking to Max, it’s very easy to tell that his love for GI Joe is not an act.  He truly knows the characters from the cartoons and even quoted Roadblock while were chatting with him. He even points out

“People ask me how badly did you want to do GI Joe?  My answer is I’m working for a fucking toy company, what does that tell you?”

Max on an upcoming project from Avatar that he’s not allowed to talk about yet:

The whole interview will be posted at www.nerdholes.blogspot.com in the coming weeks.  Special thanks goes out to the staff of Comic Book Daily that helped arrange for our press passes.