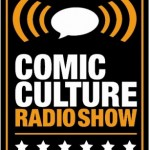 This week’s show has hosts Chris Owen and Walter Durajlija talking about DC’s new found dominance in the comic book world, Barnes and Noble’s exclusive Nook/Marvel graphic novel deal, the new Bladerunner film and a whole bunch more neat stuff. The boys also do their monthly picks out of the Previews catalog. So please kick back, relax and enjoy  Comic Culture, the radio show full of possibilities.

Comic Culture is produced by Anthony Falcone and is engineered by James McIntosh.