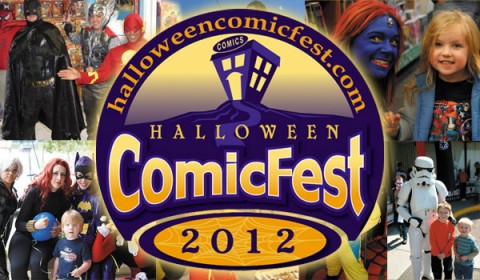 We did participate in Halloween ComicFest 2012. We opted to hold our event on Halloween itself, giving out candy and comics from open until about 9pm. We had a mini-artist’s alley at the back of the store with approximately 8-10 local creators in throughout the day, and we also used the event to launch a book by a number of local creators – the Anything Ghost anthology. On top of that we chose to run our own costume contest.

I would say that overall, it was only a slightly better than average Wednesday for sales. The creators all seemed to be having a really good time hanging out, and a lot of our regular customers seemed to enjoy eating the candy, but Hurricane Sandy really played havoc with the weather that week and it was cold and rainy that day — and combined with the media warnings and bad luck stories from across the east coast and even in the city (a local woman was killed by a fallen Staples sign two days before) — we saw very few of the local kids and families that might normally have dropped by had the weather been nicer.

While I feel it is important to participate in these types of community events, my recommendation for improving it would be that:

(1) We should all be celebrating the event on the same day. FCBD is on a specific Saturday every year that everyone in our community knows about. Halloween ComicsFest was basically, here you go – do it whenever you want… at the Lounge we held off to put out the books on Halloween itself, but other stores in other parts of the region were giving the same product away the Saturday before or even earlier. It needs to be officially on the Saturday before Halloween or on Halloween itself – one or the other, not both.

(2) The publishers need to make full-size comics (not tiny pamphlets) that are for all age groups. The publishers this year seemed to feel this was just a children’s comic event and delivered product accordingly, so when you have only adults coming in on a rainy and cold Wednesday, no one cared for the offerings this year aside from Tales from the Crypt, Archie and Teenage Mutant Ninja Turtles. Everything else was ignored.

There was potential here for something fun, and while we did have fun with it — and at it — if Diamond and the publishers really want to make this something special like FCBD, it needs to be organized a lot more like FCBD, in strategy and in the quality of the content.

We didn’t participate. We got a few bundles of comics, gave some away, and that’s about it. I’m afraid I’m just not the “social mixer” type, nor am I especially good at promotions. Oh, and we have exactly zero high school age (or below) kids in our neighbourhood, so trick or treaters just aren’t seen.

This does match up well for those stores who run “FCBD ” twice a year. Now I’m one of those who believes FCBD should be once a year- makes it extra special. A few years ago I began contending (when date conflict with Cinco de Mayo was a hot topic amongst some US retailers), that it might best serve us to move it to late September. I figure that would be especially beneficial to me, because I’m virtually surrounded by colleges and a university (three of them), and in the fall, new students are getting to know the neighbourhood, and the publicity we get from FCBD would be coming just when people are looking…

Anyways, nope- party time is just not our bag, but it’s nice that we got these nifty giveaways (we like giving stuff away when we can), so I hope Diamond continues the program.

In London, Heroes in partnership with two other stores and the Central Public Library held our Halloween ComicFest on the Saturday before Halloween. All day, customers could come into Heroes, in costume or not, and pick out a bunch of free comics, have some candy and cupcakes, and get their picture taken at our superhero photo booth. We rewarded those who came in dressed in costume extra free comics and gave treats to those who took the store’s costume props and fashioned a getup for a photo. The library held a store sponsored costume contest, a scavenger hunt, and a concert which were also extremely well attended.

I was very pleased with the reception for this event. It was by no means the size and scope of FCBD, but it was a lot of fun and a lot less work. I loved the enthusiasm showed by our customers. It was more participatory than FCBD, and did not seem to be as much about the free comics, giveaways and prizes. I would say over half the people who stepped through our door were in costume. While that may not translate into a huge day of sales, it does create some fond memories for customers and staff alike.

If I could change anything about the event, it would be a consensus on what day the event is held in order to help promote the event industry wide. I think Saturday is the best day to hold it so as it does not necessarily compete with everyone’s Halloween plans and is generally the day when most people have the most free time. I would also like to see more go into the promotion side of things on Diamond’s part. They didn’t even have a website up and running until less than a month before Halloween.

It was definitely a great day which we will continue with or without industry support. It fills a nice niche in the market somewhere between cosplay, Halloween, and FCBD. Please check out the amazing variety of freaks, heroes and monsters we had through our store this Halloween ComicFest!

We chose not to participate in the event for a couple of reasons but the main one being that it falls directly between our largest annual fundraiser (24 Hr Comics Day) and our Visions of Comics Art Show and those are bookended by the Edmonton Comic Expo and the Pure Speculation Sci-Fi Festival. To try and have another event in between would cause fatigue in customers, if we weren’t doing so already.

We took part minimally, offering free comics along with cookies and other treats on Wednesday, the 31st (as we have done the last several years with the Halloween comics offered through Diamond). With our downtown location, we don’t see a huge number of kids in the store and as expected, the turnout was mainly Wednesday regulars. I understand the desire to create another FCBD-like event but I’m not sure if I agree with it and definitely don’t think it should be linked to another holiday like Halloween. A big part of what makes Free Comic Book Day successful is that it is an event created specifically for comics, a day that is ours alone and is unique.

We participated in the event, both selling packages of books and giving them away to folks who showed-up day of. It was very solid on the sales side, but because we declined to make a ‘big’ event out of it, it didn’t do much for us on the kids-in-costume side (although Little Island had a few great costumes).

I’m glad the product exists, as it helps to weave reading, comics in particular, back into the fabric of everyday life for new and existing customers. I’m not a fan of the idea that comics should be a segregated thing, and giving away comics for Halloween is such a great, basic way to put good material in front of people in a way they’re excited about. I don’t really see it diluting, or even interacting, with Free Comic Book Day. I mean, I get that the mechanism is the same, but one is its own event, chest-thumping, proud, etc., and one is the comics industry getting up and participating in an international holiday.

I’ll admit we sort of half-heartedly participated in the event. It was never really clear if we were only supposed to give away books on the 31st, or if we could start earlier. We had a number of other events going on around that date, and it left us pretty thin in terms of planning something cool. People didn’t necessarily come in specifically for comics, but we told a lot of people in advance, and they were excited about the prospect, so we expect to see them back in the store at some point. In the meantime, we now have a great stockpile of kids books, which we will continue to give away year round. I have always enjoyed giving out the comics to kids on Halloween, but because these sorts of books have been available in previous years, we ended up not doing anything different than we’ve done over the past several years. I’m interested to see how Diamond will revisit this event next year. I’m sure we’ll hear how great it went, but I hope to see some tweaks that will improve it, such as greater information-sharing and advertising.

This year’s turnout was our lowest ever at this location, which was not a surprise whatsoever. The weather outside was frightful, raining constantly the entire day and night. Regular business was down for the day and the number of people that actually ventured out and showed up in costume was at a record low, as well. Once darkness fell (and with the time change, it fell like a redwood) kids were nowhere to be seen in the neighborhood. We went for a pizza and the rain- soaked streets were practically deserted. Just a dreary dreary day all around.

We saw the horrific devastation caused by Hurricane Sandy and I can’t imagine what it must have been like being in the thick of it when it was so miserable out here on the fringe of the fringe.

We did hand out some Halloween books but had plenty left over for bag stuffers. I understand the industry’s intention with Halloween Comic Fest, but I think FCBD should remain a singularly unique event. I’ll continue to hand out goodies to ghoulies each year, but I think I’ll reserve the bulk of my energies for the first Saturday in May.

Not really. We ordered the Halloween comics as we do every year for our Halloween treat packs. We’ve been selling packs of comics for Halloween treats for many years. “Rot their minds, not their teeth!”

The comics were fine, though the standard size is preferable over the smaller one used by many of the publishers.

We didn’t go in for the “event” as it seemed to be rushed – not organized, not enough focus on what it was about and what it’s hoping to accomplish other than just trying to be another FCBD which would be a bad idea, in my opinion.

We don’t run an event, per se, but do celebrate Halloween with decorations, free comic treats around Halloween and promotion of our Halloween comic treat packs. We sell more of them each year and it’s growing in popularity.

I think the costume contest is a great idea and could be done on the Saturday prior to Halloween on an international basis with a framework or suggestions provided by Diamond that would allow stores to better tailor their own event. 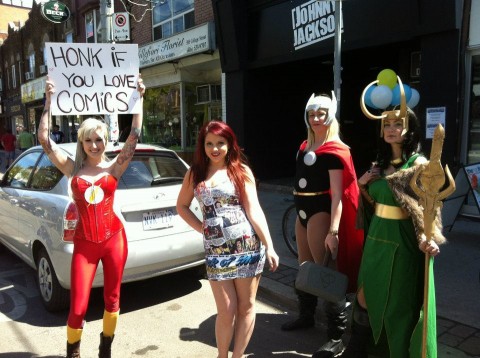