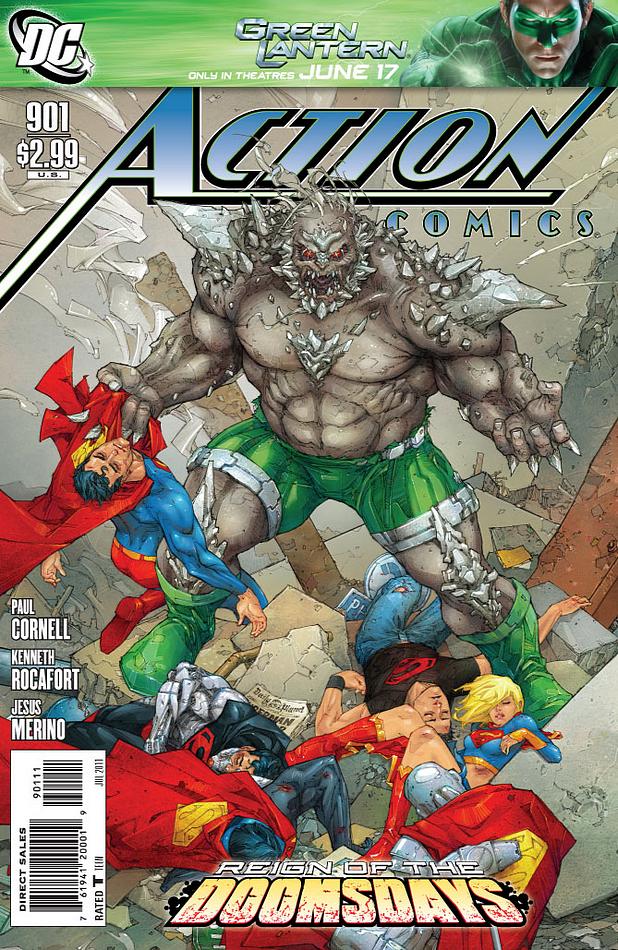 This week I’m looking at Action Comics #901, which is also part one of the Reign of the Doomsdays story arc. How was it? Onward-ho!

Doomsday is upon Superman and his kryptonian compatriots. Facing an onslaught of Doomsdays, Superman and his friends try to escape their perpetual prison while trying to save the life of the one creature to have killed the Man of Steel: the original Doomsday.

Facing down the Cyborg Superman and a trio of Doomsday clones, Superman, Superboy, Supergirl, Steel and Eradicator attempt to escape from their imminent danger with the original Doomsday in tow. Superman reaches deep into the Cyborg’s chest plate and removes his power source, promising to later return it to the character (who so happens to be in eternal pursuit of his existence’s end). The Super-folk make their exit along with the unconscious Doomsday to a more secure area.

The group tries to draw up a battle plan to deal with the forthcoming onslaught, but are interrupted by the trio of Doomsday clones. They blow right through the blast doors and attack the Super-folks. Superman handily beats down the clones, and is quickly joined by his friends. Together they defeat them, yet back on earth at the USAF Command base in Colorado we learn the planet is 10 minutes from a planetary extinction event. President Obama issues a national address calling for Superman to aid his country at its greatest time of need. Back on the space station, the Super-crew realize the station is moving closer to the earth. As they frantically try to find a way to alter its course, Doomslayer appears and tells them the earth must be destroyed. Eradicator interjects but is no match for the Doomslayer as the Super-folks can only watch on in horror.

Despite not enjoying books where the art is split between two different artists I felt like the artworkwas fairly good.  I liked how Rocafort composed the panels over the first few pages of the issue. The panels are misshapen and a little unorthodox in how they’re laid out, often slanted differently or oddly shaped altogether. I also enjoyed how Rocafort didn’t marry himself to panel conventions in avoiding by-the-numbers rectangular panel layouts. It’s a little bit more dynamic this way and helped keep my attention. I liked Rocafort’s work towards the end of the first ten pages as well, noting again how the panels were laid out while the visual sound effects were a fun touch to the work. Rocafort again contributes to the final few pages with much of the same, ending the issue focused on the Doomslayer while smaller panels of each remaining Super-person are scattered about the outside of the page.

Where Rocafort’s pencils are concerned I felt they were good, but there were instances in the issue where Superman was drawn awkwardly. At the bottom of page three Superman looks as though he had been pieced together with others’ various body parts. It seems as though the body parts don’t fit together properly. There were also panels where Superman was penciled with features that were perhaps too sharp and defined, especially around his face.

Merino’s offerings pale by comparison though. His panels are much more conventional and straight forward compared to Rocafort’s, making them a little bit less interesting comparatively. While he did offer a good page or two, nothing about his work on this issue really drew me in. His contributions to this book were altogether underwhelming and it left me wishing Rocafort could have penciled the entire issue instead of breaking up the artistic assignment. While combined the artwork was good, it felt lacking and disjointed stemming from one too many artistic stamps or hallmarks.

Having no foreknowledge of the arc, I felt as though Cornell’s Reign of the Doomsdays story was painfully lacking. The issue picks-up rather abruptly mid-action, and without a proper introduction to the story up to this juncture, I was left scratching my head as to who was whom, and what precisely was going on. Cornell’s presumptuous writing in this issue writes its way into corner it can’t fight out of no matter how mean and nasty of a Doomsday you are. For an issue that is supposed to “part 1” this issue fails to bring me in as a new reader and because I had to work to understand what was happening in the story, it was not an enjoyable read.

Moreover Cornell’s actual dialogue was overly cheesy and reminiscent of the “aw shucks” Superman stories of yesterday. With “you got me” exchanges like those between Supergirl and Superman, or Superman’s own monologue about securing the Doomsdays on the space station where they can’t hurt anyone except himself and his Superfriends, it’s as painful to read as forcefully patriotic calls to action from the President of the United States are to hear. In the proceeding dialogue Superman scoffs at his own “defeatist” and martyring attitude. The cheesy dialogue feels overwrought and forced, which combined with the storyline as a whole which contains elements from Justice League Heroes, creates a forgettable read altogether.