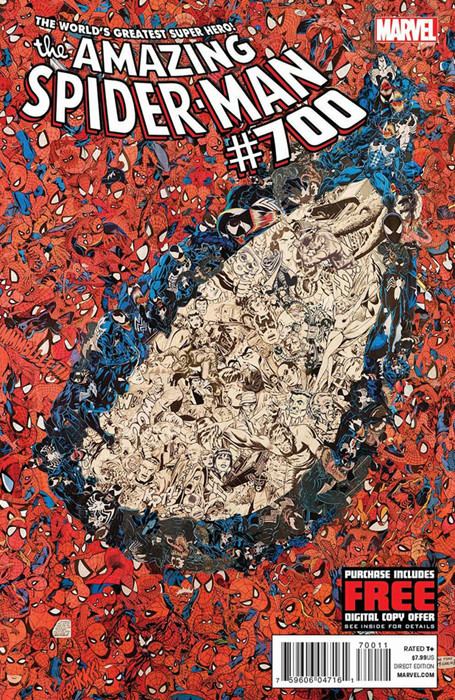 Spider-Man milestone issues have always been epic and/or controversial, and I can only imagine if the internet existed in 1971 there would have been a lot of complaining about Spider-Man growing extra arms. Each of the hundredth issues have been met with some degree dissatisfaction or anger (except for issue 300 which we all agree is awesome), either the story wasn’t really big enough for such a milestone (Spidey meets The Burglar again), or the plot seemed outrageous and only implemented for the sake of controversy.

As is benefiting a milestone issue, Amazing Spider-Man 700 is oversized, has 3 stories, and a cover gallery. I’ll assume that if you are on this website you know about the internet and you probably have some idea of the furor that issues 698-700 have caused among spider-fandom. However, on the off chance that you have come upon this review while doing a google image search I will give fair warning: here there be spoilers.

Peter Parker has his mind switched with that of Dr. Octopus, and while in Doc Ock’s broken and dying body he must figure a way to reverse the process. Now if you can get over your initial reaction of “that sounds kind of stupid” you will see that Dan Slott treats the idea very seriously, and in a way that respects the character and how Peter would react. The essence of Spider-Man has always been the continual atonement for past sins, and the constant demonstration of what it means to be a hero. This issue is no different. Peter never gives up despite overwhelming odds (a trademark of many heroes but Spider-Man in particular), and then must deal with the consequences of his final actions. The story hits all the right beats, the pacing is perfect, and we are left with a whiskey, tango, foxtrot moment at the end that makes us wonder what will happen next. I find it hard to believe that any reader will have such outrage that they will throw the book down in disgust and refuse to purchase Superior Spider-Man #1. We want to know where Marvel is going with this. 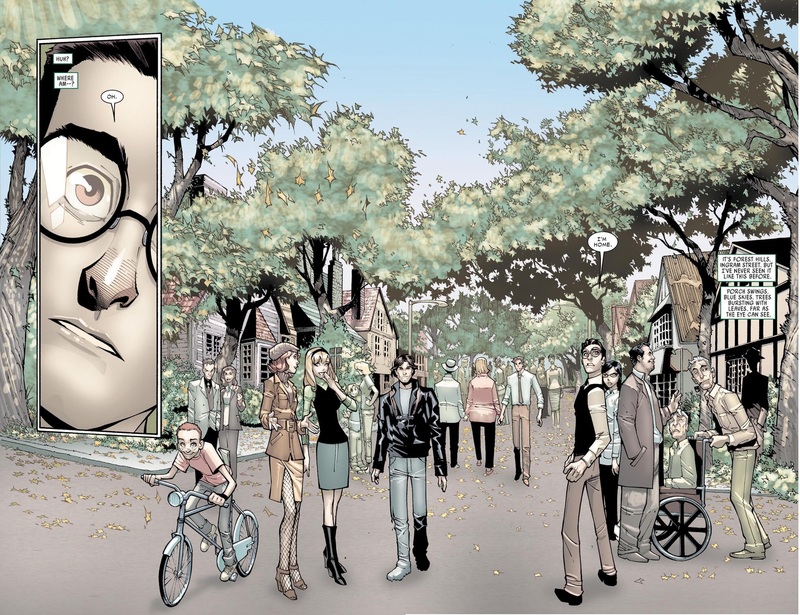 Humberto Ramos has earned his place as one of the great Spidey pencillers. I know that his style is too cartoony or outlandish for some, but his work is brilliant. Each panel has a fluidity that propels the story forward, and the splash pages and larger set pieces are some of the best that comics saw all year. The entire creative team should be congratulated on the final part of Dying Wish: Victor Olazba inking, Edgar Delgado’s colours, and Chris Eliopoulous’s lettering all show the hard work and dedication that was poured into this anniversary tale. I do think that once collected in a trade paperback the story will read strangely though. Ramos did the pencilling for issue 699 and 700, but Richard Elson (who will be working on Morbius) pencilled issue 698. They have very different styles and I think that reading it all together one issue after another will seem strange. I understand why a decision was made to have multiple pencillers, as Ramos does 52 pages in issue 700 alone, but a story arc that doesn’t have artists of similar style can be off-putting.

The other 2 stories are very enjoyable, but targeted to Spidey-fans. The J.M Dematteis/Giuseppe Camuncoli story Spider-Dreams is a love letter to the soul of the character, while the Jen Van Meter/Stephanie Buscema Black Cat story reminds us of the playful side of Spider-Man (and his amazing luck/bad luck with women). However, I would think that both of these stories will be met with lukewarm appreciation by anyone who was picking up ASM 700 has their first foray into Spider-Man.

The rest of the extras are fine (alternate cover gallery, some interiors from upcoming Spidey books) but the cover gallery from Amazing 1 to issue 700 falls a bit flat. Each cover needs to be really small to fit all 700 onto 7 pages.

And so the series is now “cancelled”. Just like it was cancelled at issue 441 and then restarted. And then double numbered. And then it went back to normal numbers at issue 500. Part of the reason why I am so surprised at the outrage is that comic book deaths and series cancellations and restarts are so commonplace that I find it hard to believe that there is anyone, anywhere, that doesn’t believe we’ll see a new Amazing Spider-Man 1 eventually.

Issue 700 is solid anniversary tale and a great way to finish off Spider-Man’s 50th year in comics. For me the only of the hundredth issues that surpass it are 300 and 400 and you would do yourself well to add issue 700 to your collection.