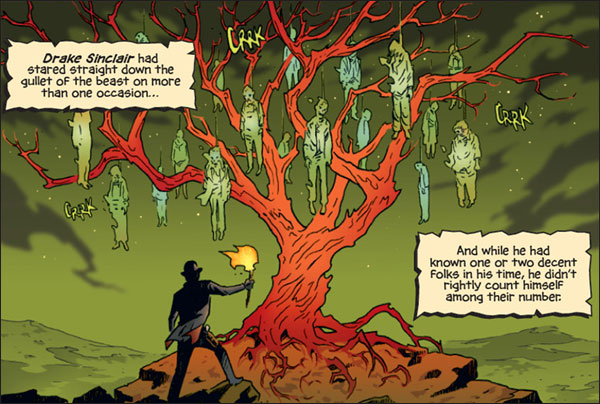 If you’ve ever read this blog you might have noticed that I’ve been kind of down on comics lately. I don’t really know why. It could have something to do with dealing with superheroes and bland ‘events’ for the past few years, but the genre (which as you too no doubt know) dominates our beloved medium – so when something different come along I try to jump on it as fast as I can.

I don’t know why I ignored The Sixth Gun when I first heard about it, and trust me, it wasn’t because of your lack of marketing. I suppose I’ve been burned before by western series (Loveless was just hitting its stride when it was canceled) and maybe I was a bit wary because of the whole ‘supernatural’ element. I should have had more faith in you guys – I remember enjoying the Damned – but instead I kind of wrote it off.

I don’t know why I grabbed the TPB this Friday. It wasn’t a mystical moment or anything like that. I was just looking for something to read on a lazy Sunday.

I’m really glad I did.

It’s not often that I re-read a book as soon as I finish it. Usually I let it gestate for a bit and if the mood strikes me I’ll give it another go.

But when I finished the last issue, I had to go back and process what I just read. 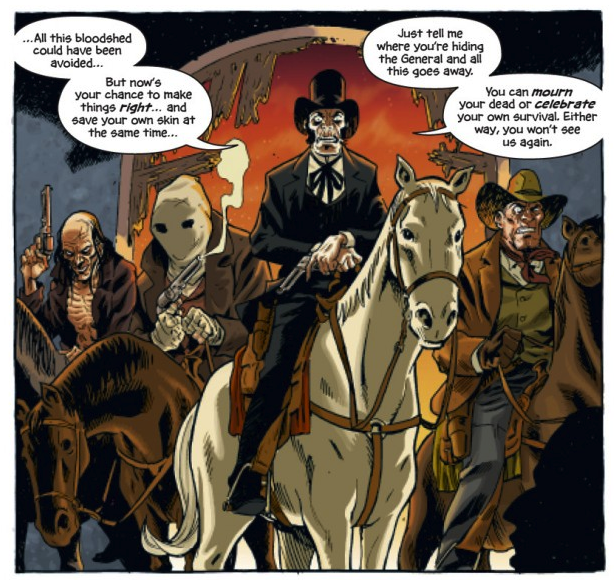 Cullen Bunn’s story is very strong. It begins with the Pinkerton Detective Agency hired by a mysterious Mrs. Hume to recover various artifacts of power; a lantern, a tarot deck, a gun. But it’s the Sixth Gun that seems to be the most dangerous, rumored to be so vile that it’s not only indestructible but that Hell itself wouldn’t take the item back. And it’s that artifact that not only the Pinkertons, but an independent agent called Drake Sinclair is also trying to find. The problem is, once someone’s touched the gun, they’re bound to it for life, and that’s when things start getting good.

Maybe it’s the characters – you toss a whole whack at the reader and kill them off with the same speed, but they stay with you. I don’t trust Drake Sinclair – at all – I spent my time with the character waiting for him to betray me. Waiting for him to show his true colors, his secret plan, his raison d‘être. I’m far more weary of him than of General Hume.

Perhaps I’m reading too much into this, maybe I’m spending too much time pouring over Brian Hurtt’s art and placing my own interpretation onto his top-notch facial expressions.

One thing that definitely stuck out the second time reading is just how well Hurtt lays out a page. His incorporation of sound effects into panels make every gun shot, every wail as loud as your imagination can handle.

It’s been a long time since I’ve been as excited about a new book* in a very long time. I don’t know how many issues you guys plan to tell your story, but here’s hoping that you get all of them.