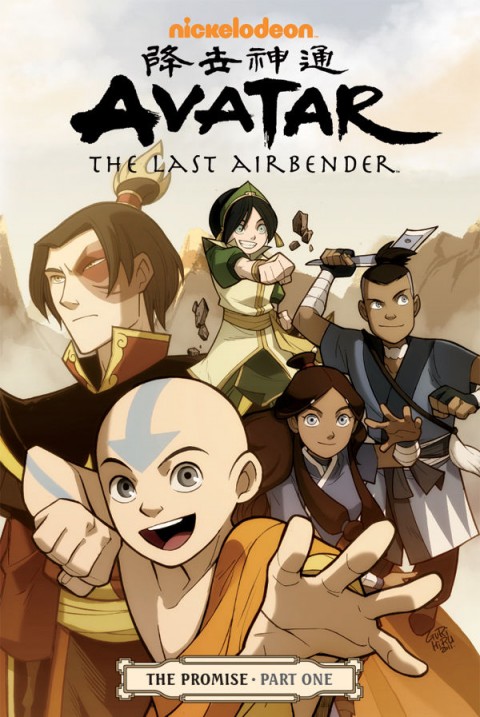 Avatar: The Last Airbender is set in a world divided into four nations: Water, Earth, Fire and Air.  There are people in each nation who have the special ability called “bending” that allows them to manipulate their respective nation’s element.  Only the Avatar can manipulate all four elements.  The Hundred Year War began when the Fire Nation attacked the other three nations and Avatar Aang ended the conflict by defeating Fire Lord Ozai. 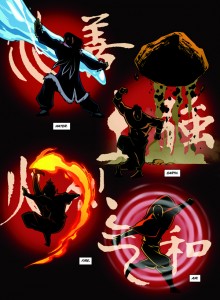 The Promise Part 1 begins immediately after the conclusion of the first animated series and contains all the main characters (Aang, Kataara, Sokka, Toph, and Zuko).  The Fire Nation have colonized the Earth Kingdom during the war and, in the interest of peace, the new Fire Lord Zuko have agreed to remove the colonies with Aang leading the mission.

If The Promise Part 1 is any indication, the focus of this miniseries is Zuko and his struggles with the burden of leadership.  He does not want to be anything like his father Ozai but has trouble finding peace with himself and with the people he rules.  This miniseries does not address the dangling question of what happened to Zuko’s mother.  This mystery will be the subject of the follow up miniseries called The Search, which is also created by Gene Luen Yang and Gurihiru.  In a rather awkwardly placed flashback sequence, The Promise Part 1 does reveal the full conversation Zuko had with the imprisoned Ozai from the final episode of the animated series.

For me, I think the most interesting part of The Promise Part 1 is the plot involving the mission to decolonize.  It is a good political move for Zuko but there is a human cost to it.  In some of these colonies, the people of the Earth Kingdom and Fire Nation have integrated (perhaps grudgingly) to make the colony into a successful and thriving city.  All the families would be forced to move to the Fire Nation, a place they never been before.  When Zuko realizes these issues, it puts him at odds with everyone including Aang and his friends.  I am very curious to see how this is resolved because both sides of the decolonization debate have very cogent arguments. 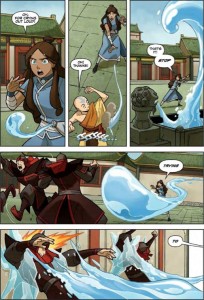 In my opinion, for any licensed material to be successful, it has to look and feel exactly like the original property.  For the most part, I think Mr. Yang and Gurihiru have achieved this in The Promise Part 1.  The dialog and how the characters interact are just like the animated series.  There are some very slight differences in the drawings of a couple of the main characters at certain angles but, overall, the visuals match the animated series.

Avatar: The Last Airbender – The Promise is intended for fans of the animated series, not the casual reader.  The Promise Part 1 is a good start to the miniseries as it lays the groundwork for some intriguing conflict between the characters and possibly the nations. The Promise miniseries is published by Dark Horse and you can find out more information about it at its website.  For anyone who is new to the Avatar world, watch the original animated series first.  It is really good.  YTV started airing The Legend of Korra in June and that is very good as well.