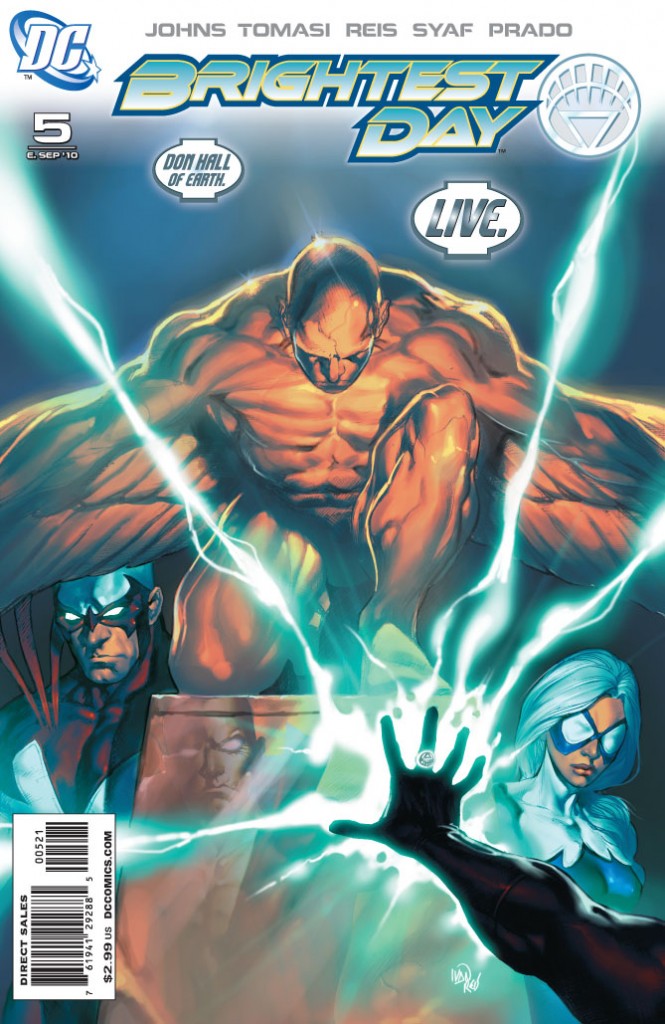 In brightest day, in blackest night, we’ll churn out these issues chagrin or delight, let those who keep buying this directionless tripe, forget they waste $2.99 every fortnight.

So Brightest Day may not be THAT bad, but with the direction the series has taken thus far, it’s hard to really get behind it when the story has been disjointed, and plagued by the problems synonymous with this format. Does issue five step out of the shadows and into the light of my good praises? Well…

Geoff Johns and Peter Tomasi continue their tale of returning heroes and their analysis of life and death in the DCU. The follow up to Blackest Night, Brightest Day, follows Hawkman, Hawkgirl, Firestorm, Aquaman, Martian Manhunter and Boston Brand, formerly the incorporeal Deadman. With each character seemingly offered a second chance at life in the wake of Blackest Night, we follow each of them on their journeys as they discover the purpose of their resurrections. 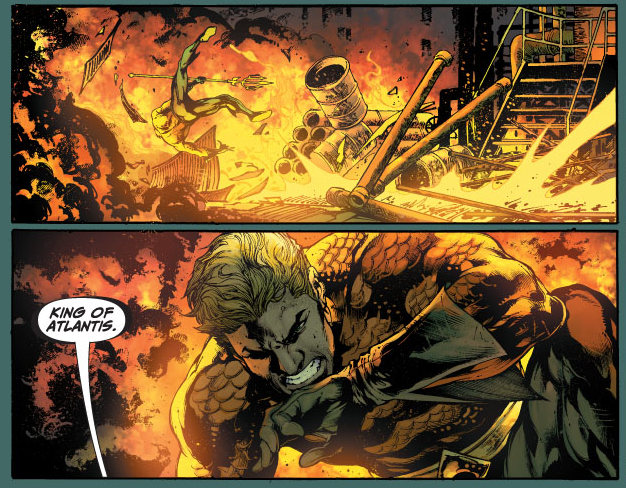 The issue begins with Aquaman and Mera in the Bermuda Triangle as they pitch in to stop an oil leak. Even as they repair the leak, they have precious moments before they are attacked by the same group we saw bursting from the ocean’s surface in the previous issue. Issue five doesn’t clarify who they are precisely, although their purple haired leader does possess the same abilities as Mera. By the end of the issue two things are clear: first these ocean dwellers would prefer Aquaman to be a little less alive, while it’s reavealed that Mera and Aquaman’s relationship may become a little more complicated.

Next we pick up Boston Brand’s story. In the pages dedicated to him, we pick up with Hawk and Dove standing at the grave of Don Hall, Hawk’s brother. Hawk had asked Brand to attempt to resurrect Don with his white ring in the previous issue, but when he tries he’s less than successful. The ring even asked Brand what he was doing. After his attempt fails, the ring tells him that “Don Hall of Earth will not rise”. This maintains the continuity presented in Blackest Night where characters who are at peace can’t be brought back. Yet, as this piece of Brand’s story ends, Dove points out that not all people in the cemetery were at peace, peering over to her own sister’s site. Brand lays his hand on the ground in front of her grave, while the white ring tells him he shouldn’t be doing this.

The final focus of the issue was on the Hawks. When we last left them they had arrived in an undisclosed location with many floating masses of land. Carter and Shiera share a conversation and an interesting kiss before being attacked by the realm’s inhabitants; a horde of feral cat like creatures and winged hawk people. Shiera is grabbed by one of the hawkpeople and taken away, leaving Carter with the cat-people. It’s here we find out that Carter and Shiera have arrived on Hawkworld. So what’s Thanagar, chopped liver? This story ends with Shiera and Carter split up between the two warring factions, with the audience unsure of Shiera’s fate. 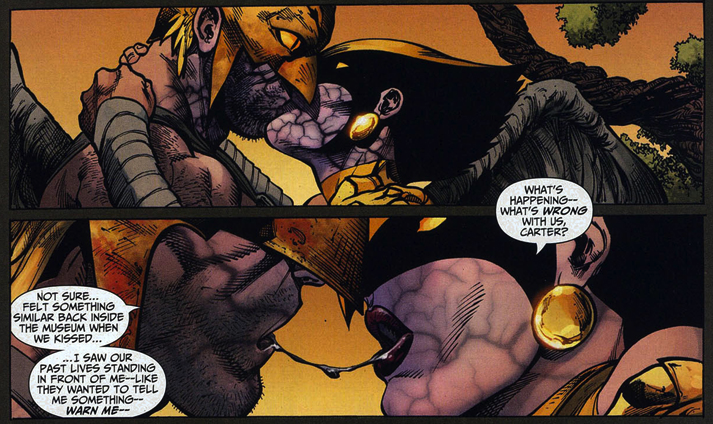 The art continues to be the brightest spot in this series so far. The artists have continued to offer stellar work on every issue thus far, and this issue of Brightest Day isn’t an exception. Using the Aquaman art as examples, Aquaman, Mera and their attackers are drawn quite well both in regard to the capturing of emotion in their faces, and the elemental effects on the art throughout the scenes. This is a mainstay in Reis’ art and has been concurrent through scenes of this variety in the series so far. Whether angered, surprised, or determined, through gritted teeth or otherwise, it’s easy to tell what the characters are feeling in the moments before them. As for the elements, Reis and company capture the effects of Aquaman and Mera swimming through oil and water at a spill site in the Bermuda Triangle. As well, the artistry of the “solid water constructs” use several tones and 3-D techniques to colourfully make the images jump off the page. There’s a good panel where one of these constructs “fwooshes” by Aquaman from right to left. Aquaman dodged the attack, moving to the side. What’s really a nice touch is the addition of colouring in the construct; the colouring of his shirt can be seen through the construct.

Continuing the nicely done art, the scenes with Brand are also well done. Reis’ strengths lay in scenes like these where elemental effects or light and dark tones are required for the scene. Reis does these elemental and aura effects with such mastery it almost compensates for the lesser efforts throughout the book. The scenes with the Hawks which focus on the landscape primarily pale by comparison and feel bland and boring. Reis’ strengths beyond those mentioned lay in strong, close-up action sequences, or those where we’re given close-up shots of the characters. Some of the more intimate scenes of the Hawk sections are nicely done, as well as the scenes with the Hawkworld locals where their viciousness and ferocity are captured, while some are less interesting. It feels like the more that Reis and company try to capture, such as larger action pieces confined in smaller panels, the less refined it seems. Reis’ is at his best when he tries to capture the nuances of a character or battle, but he needs larger canvases to really accentuate that. Overall however, the art’s shortcomings are vastly overshadowed by what is done well. 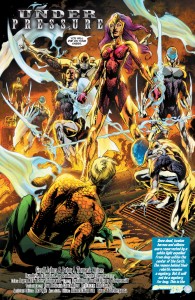 In what is becoming routine, I love the art, but continue see the story as the weak link. That isn’t a knock against Johns and Tomasi, both of whom I consider extremely competent writers. It’s a systemic problem with how these weekly/bi-weekly comic book events work. Here we have a single bi-weekly book that is supposed to balance the stories of five characters over 40 pages. Subtracting advertisements, it turns out to be much less than that. As a result, the stories they do try to tell are glanced over, or as was the case this week, omitted entirely. In Brightest Day #5, Johns and Tomasi don’t even touch on the stories of Firestorm and Martian Manhunter. Essentially the issue breaks down with Aquaman and the Hawks getting about nine pages a piece, while the Brand story gets about four.

As I’ve maintained, this format doesn’t lend itself to coherent storytelling, and it doesn’t matter who the writer is. You cannot attempt to cram five stories into one book and expect to maintain a solid readership, especially when I suspect some readers are skipping over the pieces that don’t interest them. All of a sudden you could have droves of people dropping the book, because what you have instead are the equivalent of five minute cartoon shorts reminiscent of Looney Tunes. The difference though is that there’s no closure really here, and to then skip a week of that character’s story (using Firestorm as an example), the format helps kill any momentum the character gets when the purpose is to get people interested in these characters again. This series is great because it exposes the characters to a wider audience, which DC knows is a better option than a singular mini-series for each considering the lack of success for their individual books in the past. However it’s moot in that those people you’re trying to cater to are getting left out in the cold with issues like this which omit stories entirely. What about the Martian Manhunter fans? I don’t believe we’ve see him since issue three. I even originally forgot to include him in the opening introduction! There’s a definite lack of balance with these comics. I’m sure they’ll read to quite well in trade, but as a serial comic book, these books are a difficult read.

I’ve done nothing but praise Johns’ work in the last six years, but I can’t here. This isn’t a knock against either writer, but more a commentary on the fact that maxi-series in the vein of 52, Countdown to Final Crisis and now Brightest Day do not work. If you’re interested in the characters, continue reading. Otherwise, I feel there’s little reason to follow this series, and you may be better served to wait until the trades are released next summer.