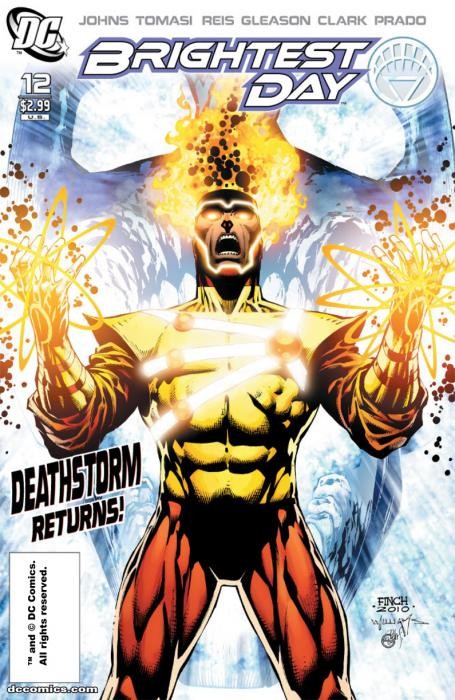 Guess who’s back, back again…

I’m sorry you had to read that, but after a week long hiatus defined by ridiculous levels of insanity, I felt the need to over-compensate for last week’s lack bad pop culture references. As it just so happens, the latest issue of Brightest Day was released this week so as is customary, comicbookdaily.com brings it’s bi-weekly look at this controversial book that’s either a hit or miss depending on who you talk to. What’s the verdict this week?

In the wake of Blackest Night, 12 heroes and villains return from beyond to fulfill their destinies and help bring the next great hero into being. Can these men and women complete their tasks and bring forward the universe’s savior? 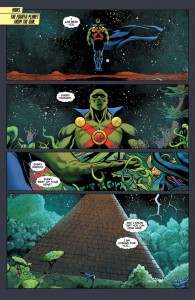 Hovering above his home planet, J’onn J’onzz, the Martian Manhunter notices the vast forest that’s grown on Mars. Touching down in front of the planet’s pyramid, he walks inside to find the other green martian who’s been wreaking havoc on earth. We find out the martian’s name is D’Kay D’razz, and that she’s intent on seducing J’onn and restarting the revitalization of the green martian race. We learn D’kay’s history and how she survived the near-extinction of the green martian civilization which included J’onn’s family.

D’kay tries to break J’onn mentally, forcing visions of his Justice League friends attacking him into his mind. They eventually subdue him and trap him into a green coffin courtesy of a Green Lantern. He eventually sees through the ruse, and attacks D’kay, throwing her into the ground and smashing her further into it, shouting he’ll bring Mars back his way. Suddenly the white light of the white entity explodes from the ground and Mars springs back to life. Green martians rise from the ground,

including his family. J’onn embraces them, with tears rolling down his cheeks. The final page comes, and all may not be what it seems.

Aside from this portion of the book, four pages centred again on the Firestorm story. The re-invigorated black lanterns hover high in the sky, while Ronnie and Jason watch from below. They soar up, arguing the entire way. The matrix disrupts, reminding us again how unstable they are when merged. As they follow, they notice the black lanterns disappear at the beckoning of another being who desires the lantern. The book offers an aside with Dove and Boston Brand, hinting at a looser connection between the black lanterns and their human counterparts. 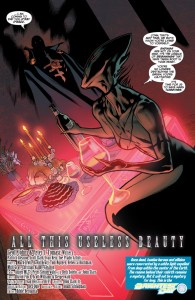 Perhaps the title doesn’t apply so much to this week’s art. I’ve been fairly critical of Gleason’s Martian Manhunter art so far, and the criticisms are very much the same. I’ve not been a fan of how J’onnz is drawn, feeling he’s too blocky and cumbersome on the pages. The art does look better than normal in stretches throughout the issue, complemented by the reddish hues of the martian planet. It creates darker tones that look good in the opening pages while the sinister D’kay tries to seduce J’onn. Where the colouring lightens and lighter tones are used the main criticisms I’ve held for the art magnify. There were some good emotional scenes where J’onn meets his family, and where he’s enraged by D’kay. For the most part, the art is still underwhelming. I also thought the JLA pages were good but altogether average.

Scott Clark’s Firestorm art is still top notch and I’m thoroughly enjoying his work, as well as the Brand art done by Reis in the character’s sole appearance. Unfortunately, they again outshine and outclass the rest of the work in the book. 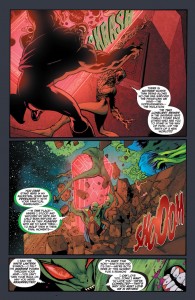 I’ve not been a fan of the Martian Manhunter story to this point, and having an issue directly focusing on his story did little to change that. I found myself initially skipping through a decent amount of it on first read through, before going back over it again. Part of his story I suppose to fight his past the parts of myself he still clings to. These things for all intents and purposes prevent him from moving forward, they prevent him from living. That is the crux of the series really, to find that reason for being. Part of that at least is letting go of the parts of yourself that derail that process and keep you from moving forward. That’s a good story, but the way it’s presented here is un-engaging. It’s pretty clear where this is going and what he’ll have to give up. Johns and Tomasi additionally indulge the human dynamic of an alien/immigrant’s attempt to integrate into society, only to disengage the melting pot as it were and to become what one is according to what they identify with. To focus the vast majority of the book on J’onn hurt the issue in my eyes unfortunately, barely paying service to the other characters. It feels like they arbitrarily included the four page Firestorm/Brand work as filler to meet their page quota, and that’s never a positive point in any book. I don’t agree in pacing the series this way, and to revert back to the previous formatting is a mistake. Remind me, when was the last time we saw the Hawks, and do you care?

It’s a question worth asking.