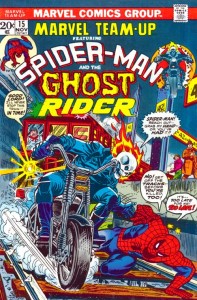 A pick for Halloween.

As far as Bronze Age Marvel characters go Ghost Rider was one of the better creations. Motorcycle stuntman Johnny Blaze sells his soul to Mephisto (Satan) in order to save the life of his mentor. Blaze’s soul ends up bound to the soul eater Zarathos instead creating the flaming skull character called the Ghost Rider. Though no Wolverine, you could easily argue that Ghost Rider is just as important a character as Blade and the Punisher. He’s infinitely better that Moon Knight!

As far as Bronze Age titles go Marvel Team-Up ranks right up there. The title ran 150 issues from March 1972 to February 1985. Team Up is where we first saw John Byrne do X-Men (#53), where we saw Spidey don the black costume for the first time (#141, tied with Amazing Spider-Man #252) and where we saw innovative co-stars like John Belushi and his SNL gang (#74). Team-Up is also a title that boasts some terrible team-ups (so terrible that you want to own them). Who wouldn’t want a copy of Spider-Man teaming up with the Jack of Hearts (#134) or Spider-Man teaming up with the ever popular Gargoyle (#119)?

Marvel Team-Up #15 is a very early Ghost Rider appearance. It was published a month after Ghost Rider #2 ($100 value in the guide) and a month before #3 ($65 value in the guide). It’s funny but the Overstreet price guide lists Marvel Two in One #8 (March 1975) as an early Ghost Rider appearance and gives this comic a $28 guide value. Two in One #8 is over valued while Team-Up #15 is under valued so start working those trades.