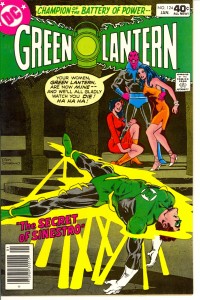 The Cover: Obviously Sinestro has become tired of Hal Jordan being known as the playboy of the cosmic seas and is determined to upstage him. Sinestro has bound Hal to some kind of weird yellow table construct that looked like the artist was too lazy to do a proper job of a table. Hal’s ladies seem to be fawning over Sinestro like the cover of a Conan comic. What is with the pose of a lady sitting down clutching a guy’s leg anyways? Wouldn’t that impede your movement and be uncomfortable?

The story: Our tale of cosmic pimpage begins with Green Lantern attending the opening of a museum dedicated to space travel. He flies down and snubs the reporters at the event and Green Arrow at the same time. They apparently have had some kind of falling out over Green Lantern gallivanting off in space without his buddy. It really looks like a married couple fighting. Switching back to his street clothes, Hal meets up with Tom and Carol before they sit down to listen to a presentation when all of a sudden, Sinestro blasts a hole in the wall and randomly sets stuff on fire. During this attack, Sinestro rants about how unworthy humanity is and continues to blast the museum apart before flying off.

This leaves Hal to transform into Green Lantern and use his power ring to not only hold the museum together and rescue civilians, he creates a giant fire hose and makes water from it to put out the flames. Somehow Green Lantern has gained the power to make water from nothing. Which makes me wonder why doesn’t he just use his ring to rejuvenate drought areas of places like Africa and so some good? Probably because that would also make for a super damn boring comic and would last for 1 issue tops.

In the aftermath of the attack, Hal decides that he needs to blast off into outer space and chase after Sinestro but no before he delivers a verbal slapping to Green Arrow about it not being his business. Green Lantern arrives on Korugar to search for Sinestro, but we should note that he never once explains why he is searching for him on Korugar out of all the billion planets Sinestro could be. He would return to the one planet where all of the inhabitants want to kill him. Jordan meets with Katma Tui who directs him to a Null Chamber operated by Sinestro’s father; Korugar’s version of an opium den. Jordan busts into the den only to be attacked by Sinestro himself who is posing as his father who is trapped and being drugged by the Null Rays.

Yeah, Korugar’s version of opium are yellow beams that get you high which kind of sounds pretty cool. Well, since the beams are yellow, Hal’s ring can’t protect him against them so he is immediately intoxicated by the pee beams and sees visions of Carol Ferris and Kari Limbo, his former lovers most noticeably NOT fondling Sinestro. While Sinestro is gloating over trapping Hal in his yellow drug beams that look like urine splashes on the page, Katma Tui comes to the rescue and frees Jordan. Free from his stream of opium pee, Jordan begins to pummel the crap out of Sinestro until he decides to flee by…turning sideways? I swear, they must have decided to break the 4th wall by having a 2D Sinestro turn sideways and make himself invisible.

Anyways, now that Sinestro has fled, Hal decides to thank Katma the only way a stud like him knows how. With a kiss! But alas, Katma feels nothing because of the most epic line for alien women in the DC Universe ever: “Thought I resemble your Earth women, I am not female as they are! Your…kiss…has no meaning for me.” So, does that mean that they have no defined gender by human standards or was she just not male and John Stewart was in love with a dude?

Rating: 1/10: There was almost nothing in this comic that resembled the cover. Never once did Hal even hallucinate that his lady lovers were fawning over Sinestro. In fact, the only thing that really did happen was his being trapped in a bunch of yellow stuff. Actually on closer examination, doesn’t the cover make him look like he is drowning in a floating pool of pee? And on even closer examination, this comic was pretty damn boring.