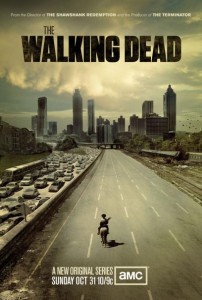 That’s right! Comic Book Daily has taken a look at the complete first episode of the series based on the comic. And after watching it, I have to say that it’s a fantastic start to what is hopefully a long running series that will keep pace with Robert Kirkman’s writing.

The shootout that caused Rick to enter the hospital was expanded upon a bit more, making it a real big gunfight with Rick, Shane and a bunch of other cops blowing away four crooks. Rick gets shot but his vest stops the bullet and while he asks  Shane to not tell Lori,  another crook pops out and shoots him badly. This is the  wound that puts him into the hospital. Before the shootout there was a little gabfest between Shane and Rick that made me immediately think: “Man, I never thought these guys would have such  deep south accents”. Then again, I kept forgetting that this series is supposed to take place in Kentucky at the start.

Upon waking up in the hospital, instead of the scene where Rick opens the cafeteria door to find corralled zombies, he finds the door chained with moaning coming from behind and zombie hands grasping through the gaps in the doors. It’s a chilling moment and a much more effective scare than the original comic scene. As Rick tensely makes his way out of the hospital, he immediately sees the huge rows of piled bodies left by the engineers and makes his way back towards his house before he encounters Morgan and Duane; the father and son that mistook him for a zombie and knocked him out.

Morgan and Duane have a good chunk of screen time devoted to them as well. Unlike the first issue where they get all of three pages devoted to them, the series shows how little Duane has been traumatized by the loss of his mother who has been zombified. They also fill the audience in on most of the information about the zombies themselves. As night falls, Morgan explains to Rick that the zombie of his wife wanders the streets and tries to open the door leading back to the family home. After Rick takes them to the police armory and loads them all up with weapons, he makes his way back to the city. This is where we get a slight deviation from the material as Morgan begins sniping the zombies outside of his home in an emotional scene to lure his wife and end her zombie existence. He’s crying while sniping zombies but can’t bring himself to shoot his wife even though she’s a zombie. It’s not in the comics, but it is a great scene.

On the way to the city Rick tries to broadcast on a CB radio and the message is picked up by a group of campers that are nearby led by his partner, Shane. Okay comic fans will know right away that Lori and Carl are there with Shane and that Shane has been knocking boots with Lori and taking care of Carl. Unfortunately, the series doesn’t want to tip it’s hand in this scene and so it goes out of its way to awkwardly never mention Carl or Lori’s name here. It’s only sixty seconds when Rick gets out of the car after it runs out of gas and he grabs a photo of his family do lay viewers realize that it was his family in the camp.

The first episode ends shortly after Rick rides into the city and is immediately set upon by a horde of zombies when he turns a corner. This scene was pure awesome. We get a great sense of the scale of infection when they tear into the horse.  Rick tries to make his escape and  climbs into a nearby tank and seals it while the horde pounds and shakes the tank around while Rick is panicking. The episode closes with the tank radio coming to life as someone who we assume to be Glenn calls him a dumbass and ask if he’s cozy in there.

The zombies in this series are extremely impressive. There are a few that could have used a better makeup job, like the zombie at the police station who looked like a dude in a mask. Then there are others, like a half-torso zombie girl, who is crawling across the road to get at Rick that looks fantastic.

I’m gonna give this episode an 8/10. I can’t wait for the rest of them to come out. There’s so much stuff I am looking forward to, especially the prison arc.