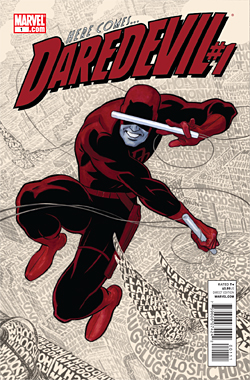 After a year in which we saw Daredevil fall farther than he ever had during Andy Diggle’s polarizing run on the title, spiraling out of Shadowland we find the man formerly known to be without fear returning to face his demons. In tow is a new creative team, and evidently, a new lease on life as Mark Waid and Paolo Rivera team-up to reintegrate Daredevil into the greater Marvel universe. This week we’re taking a look the first issue of the new Daredevil series. Here comes Daredevil!

Coming off the worst stretch of his life, Matt Murdock left New York and travelled cross-country to find himself. After a brief stay in New Mexico, Murdock rediscovered his nature after helping a small town overcome its problem with some aggressive locals. Upon returning to New York though, Murdock must face the consequences of his actions.

Infiltrating a small compound in Manhattan just off the Hudson River, Daredevil stealthily works his way inside to overlook a wedding intended to unite two of New York’s larger crime families. Matt watches the ceremony from afar, but notices subtle shifts in the environment and interjects before the Spot can kidnap the ceremony’s flower girl. He quickly discovers whom among the two families the Spot was working with, although the mobster is quickly dispatched by his co-conspirator. Still with the little girl in his arms, he passes her off to one of the family’s members and steals a kiss from the bride before stopping the Spot. Refocusing on his day-job, Murdock returns to the courtroom to defend one of his latest clients but is undermined by the prosecution’s continued attacks regarding his character and that of his alleged alter-ego. Murdock is removed from the case, but later has a meeting with the new Assistant D.A. who passes some information to him regarding his former client’s case. As Daredevil, he leaps into action and heads to the location indicated on the documents given him, but is ambushed by some unexpected company.

I’m unclear on Waid’s logic in trying to re-introduce the character’s history on the opening page, but I felt it was unnecessary and the book didn’t need it. It surely serves to introduce new readers, but the method used, although nicely done combined with Rivera’s art, served very little purpose. The story itself was rather unspectacular for a first issue. We find Murdock trying to reintegrate into the Marvel universe, starting off by taking down a D-level flunky named the Spot and transitioning into his day-to-day interactions with vendors, friends and co-workers. Although I understand Waid will need time to find his niche on the title, he will have to do better than what this issue had to offer if he’s going to have his run held in the higher regards such as the Bendis, Diggle, Brubaker and Miller runs. One aspect I felt he did well was the descriptive dialogue he used when Daredevil was picturing the landscape of the small Villa near the Hudson. As a whole it was scripted quite well, but the scene where he scoops up the bride and kisses her re-instilled my concerns of his “swashbuckling” Daredevil and what it means for the character. The issue was also accompanied by an equally disappointing back-up story focusing on Foggy and Matt as they walk to Jack Murdock’s grave site. The story ends with Murdock proclaiming he wishes to live, effectively choosing to live in denial instead of living with past mistakes. I disliked this portion greatly because it’s here where anyone who disliked Shadowland should cringe as their worst fears come to light with Waid’s initial foray into Daredevil’s neighbourhood.

Despite genuinely disliking Rivera’s pencils, I’m torn on this issue. An issue’s art is really only as good as a book’s artist, while the colourist can only do so much to draw the quality out of the pencil work. There’s very little that’s noticeable or inspiring about his work and I feel it’s resoundingly underwhelming altogether. Where fans have had a tremendous pedigree over the past few years with artists, Rivera’s work is a letdown. Even still, despite his pencil work’s shortcomings, he does have his stronger points as an artist.

Although I disliked the introduction page, I feel like the artwork nicely articulated Waid’s script in matching each piece of dialogue with a corresponding piece of art. Although his work is rather flat, I liked how Rivera drew Murdock to be leaping down to the crowd and then leaping back up in the same panel in a swift swoop during the wedding. One of his better panels was when Sal was revealed to be an inside man for the kidnapping plot. Following the page, Sal points his gun at Daredevil just as a black spot appears on his shirt; the Spot’s hands simply reach up and snap his neck. What I liked about the sequences was how there’s very little dialogue on the page, and all we see as readers is Daredevil covering the eyes of the young girl just as Sal’s neck is snapped. The best part of the page, in addition to other similar instances in the issues, is the reverberating sound picked up by his radar sense. I like the use of the purple and black to create an image of Daredevil’s radar, which was done quite well.  It very much tells this part of the story visually, and Rivera does a fantastic job throughout the issue of telling Waid’s story visually better than Waid himself.

I don’t feel like this issue delivered a viewing experience comparable to the work put forth by past writers. Looking at the script alone, this work spits in the face of the past stories. Waid’s “swashbuckling” Daredevil, along with his overly embellished “kiss stealing” characterization perpetually pits Daredevil in a 180-degree position where he foremost is mischaracterized, but as noted in the back-up story, is making a concerted effort to enter a state of denial and actively forget the events of Shadowland. The only comparison I can come up with depicts Waid’s Daredevil as a four-year-old who sticks their fingers in their ears and proclaims they’re not listening while bursting out in song. This is just poor story telling on Waid’s part, indicating an incapability in his own scripts to function inside an established story. For everyone believing Shadowland to be a cop-out, this book surpasses that ending by leaps and bounds. Concerning the artwork, I feel like Rivera is vastly overrated in his pencil work, but he compensates for this in how he conveys Waid’s script visually; his strength laying being able to tell a story with his art. This new series is off to a lackluster start with sub-par writing and questionable artistry. And considering the book’s pedigree, I feel it’s a disappointment.