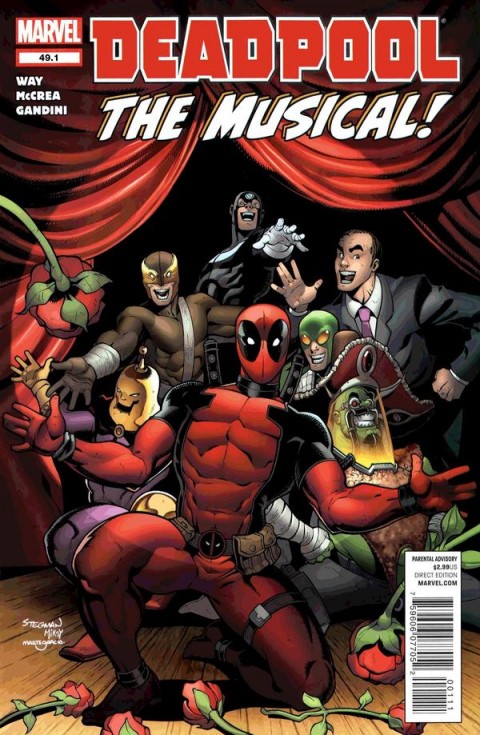 Marvel released its latest round of point-one comics last week, among them Deadpool #49.1. Like any other “point-one” issue, this was a side-story bonus for readers featuring everyone’s favourite “Merc with a Mouth.” If that weren’t enough, the book was written as a musical. Considering that irresistible combination, the issue had to be remarked on. Onward to the review!

Once upon a time Deadpool was created. He liked guns and killing, it was a hobby. Old Wade is a deep fellow though, and like anyone else, he’s been through a lot and has begun to contemplate his life.

A quartet of thugs scurry through a warehouse hoping to escape Deadpool, but meet their pursuer face-to-face. One of the thugs remarks that Deadpool doesn’t even have a gun, to which Wade replies that he doesn’t need one, he’s armed with harmonies. As Dave fires up Wade’s boombox, Deadpool “kicks” a rhyme to the tune of Naughty by Nature’s O.P.P. After taking care of the four goons, Deadpool takes us on a journey about how his life got flipped, turned upside down, and how he came to be the man he is today. From his battles with Wolverine, to his recent quarrels with Norman Osborn and Bullseye, up to his attempts to join the X-Men, become a better hero and his moonlighting as a pirate, Wade’s sense for song captivates the audience in his mind. Upon closing with the Misfits’ “Last Caress,” Deadpool remarks that he’s saved some planets, but laments whether this is all there is in life. As the final number ends and Deadpool is left by himself, he walks away slowly, remarking that the final curtain has yet to fall.

What is there to really say here? It’s a Deadpool comic after all. In this case, having not read a Deadpool book in some time, it was nice to be able to pick it up and read through it as though I hadn’t skipped an issue. Although I dislike the idea of Marvel’s “point-one” comics, I can hardly take issue with it in this case as it gives Way another opportunity to tell a Deadpool story, to which he is quite good at. This issue was what you would expect. There was a little bit of violence, a lot of comedy, while the premise itself reminded me of the musical episode of Buffy the Vampire Slayer. It’s a funny platform to put Deadpool on, but one that works as he’s a character that while still capable of being taken seriously in the right setting, is also one where the character’s comedic traits can shine in an issue like this where the book’s plot isn’t being told in a conventional way, rather its gimmick helps convey what Deadpool is feeling, while dually functioning as a recap for readers to use to catch up on what Wade has been up to leading into the “Dead” storyline. Altogether a fun, enjoyable issue.

The artwork fit the story nicely. It definitely had its comedic elements, which for a book like this isn’t out of the ordinary. McCrea did a great job of recreating panels and sequences of artwork from previous storylines, mashing it all together into a cohesive presentation of Deadpool artwork over the last 50 issues or so. I enjoyed changing the landscape of the panels to resemble an actual stage play, as though Wade had actually gone to the trouble of constructing a stage for his musical. Despite the book’s goofiness, the art did its job of matching it page for page, offering a light-hearted viewing experience.

Deadpool titles are what they are, and this was no different. I really liked the musical premise of the issue, operating nicely to sum up his story and prepare new readers for the “Dead” storyline. Amid seemingly endless Deadpool titles, Way’s version of the character is the best, most enjoyable version and one which I’ve never been disappointed reading. Conceptually the issue was well done, leaving me smiling during the duration of my reading. The book has never taken itself seriously, and it’s a welcome change for anyone who just wants to read a fun book that also happens to be well written.