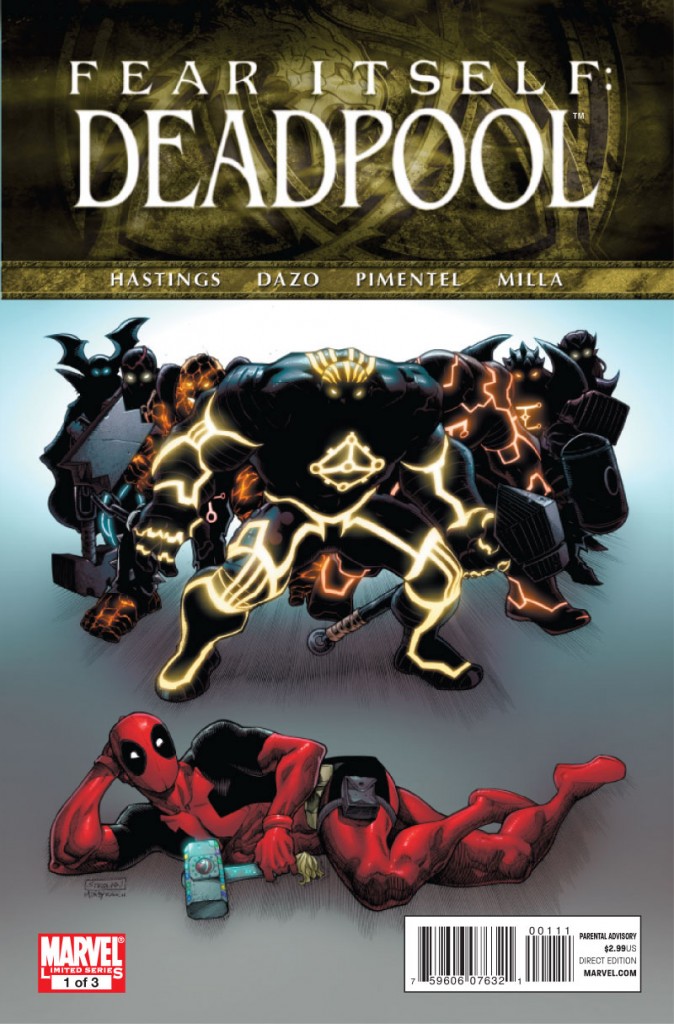 Fear Itself is the biggest comic event this summer. Large, strong, burly characters are getting hammers left and right, transforming into these cool god-like bad-asses. In all this you may be asking, “where’s Deadpool? What’s Wade up to?” To answer that question, friends, I’ve entertained looking at Deadpool’s participation in this little summer event. It’s Hamma-time!

Hammers are raining down from the sky, and the chosen ones are swinging them mightily. What about good ol’ Wade? He’s taken to home repair and reinforcement, before being attacked by Juggernaut and proving despite his handicap, he is too bad-ass and too legit to quit. 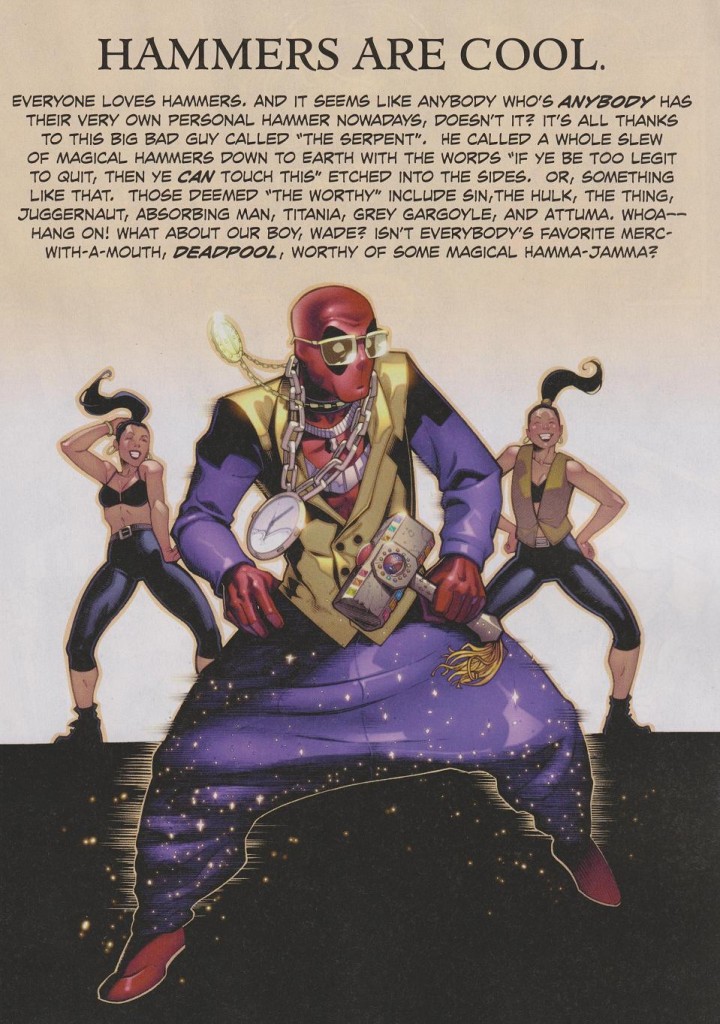 Having taken up home security as a hobby, Deadpool is attempting to sell a security system to a husband and wife when Juggernaut comes crashing through their living room wall and each subsequent neighbour’s wall. After the stressful, exhausting event, Wade sits down and watches some television much to the amazement of the man and woman. Across the street he spies a man with a bazooka firing a rocket into a the plumbers’ van, causing a massive explosion. Wade finds a large hammer, and in light of recent events, runs away with it. Much later, Wade kicks back in his secret lair and goes through his criminal database looking for a suitable wielder of his hammer. He eventually comes across the Walrus and decides on him as his “champion”. After blowing up a monster truck at a rally, Walrus goes on a mini-crime spree but is interrupted by Deadpool who, combined with some special effects, mimics the hammer falling from the sky. Walrus picks it up and believes himself to be “chosen” and runs off with it. After failing to do anything with it, Deadpool arrives dressed up as a spectre and tells Walrus he is chosen and will sow chaos and destruction in Cimarron, New Mexico. Walrus’ confidence quickly gains momentum.

The book’s artwork in comically less than serious and it works for the content. The entire book (and series) is a joke unto itself, giving the artists more leeway to create more comical experiences such as the expressiveness of certain characters’ faces or instances such as Juggernaut running through a series of homes.  Even still, the pencil work and colouring are well done. Between exploding cars and blinged out hammers, the artwork is light and fun, working well with the tone of the story which itself isn’t serious. It’s not great, but it’s fun to look at. It’s all good. 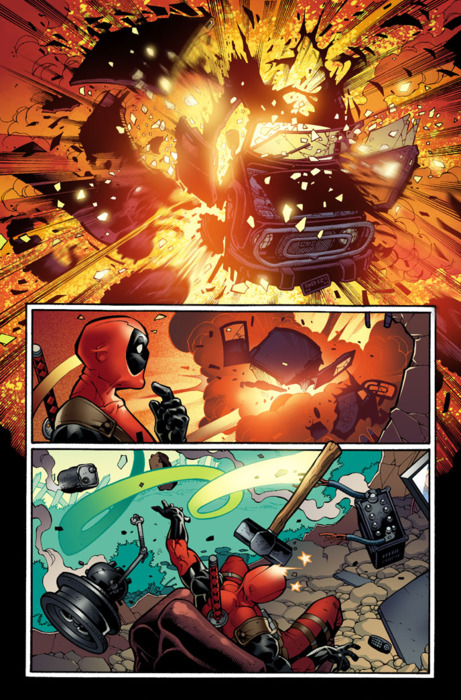 What would a company wide crossover be without a Deadpool book? Immediately I have to criticize the book as a cheap, watered down addition to comic stands catering to the Deadpool fans’ already broadened selection of offerings. This, in and of itself, is not expertly written nor is the story particularly interesting. It is however a fun read which is where it will have its audience. Even still, I feel like this book doesn’t measure up to other Deadpool books, much less the main title. It is what it is; obviously the summer’s token Deadpool book. Even by those standards I didn’t enjoy the issue. Deadpool, written by Daniel Way, takes itself more seriously in tone but injects humour into the dialogue that is honestly fun to read. This book, contrarily, was just over-the-top slapstick with no real substance to the content. If you obsessively love Deadpool books, continue reading the series. Otherwise, save your $4, because this book should need Hammer’s dancing shoes to bust a move off the store shelf.