This is an open letter plea to Humanoids North America as part of Comic Book Daily’s Humanoids week: number one get yourself a public relations person and number two start adding material to your books.

I’m a big fan of the work being produced by Humanoids and have picked up almost every book released to date.  They’re solid works by a lot of creators most North Americans are unfamiliar with.

For some unknown reason Humanoids does almost nothing to promote itself.  No social media such as Twitter or Facebook.  The website features an editor’s blog and news section that hasn’t been updated since 2010, plus a blank previews page.  The homepage is at least updated to reflect shipping information.  I contacted them through the website requesting to be added to their media list and was told they don’t have one: that means no press releases or review copied going out the media.  It also explains why I don’t see any reviews out there, other than mine of course. 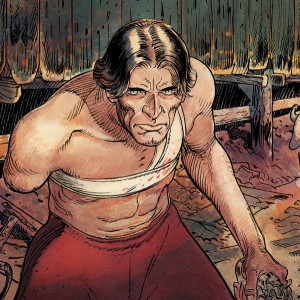 As I said earlier I’ve purchased almost every volume released the while the original content is excellent there is rarely any bonus or editorial content.  I’ve seen covers and the odd introduction but that’s it.  What really needs to be added is biographical information, the book or series original French name, maybe even a little history of the work.  I don’t know any of these European creators and would love to know more about them, especially if it promotes other works.

There doesn’t seem to be any price uniformity, instead based on the creator’s popularity.  Day Of The Magicians and Legend Of The Scarlet Blades were both $30 and just shy of 300 pages while Screaming Planet was $25 for 120 pages.

Distribution is solely through Diamond; this is great if you live close to a comic shop but otherwise it makes getting Humanoids publications tricky.  U.S. online booksellers carry the line but nothing in Canada or the United Kingdom.

Lastly I’m surprised by editorial errors such as spelling mistakes.  I find it hard to believe basic spelling can get glossed over before a book goes out.  Here’s the biggest error I’ve found: how can you not notice the cover or spine is wrong? 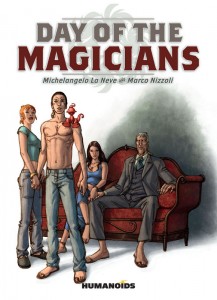 There is a lot to like about Humanoids’ body of work.  This is their third time around trying to make a go in the North American or English-speaking market, and the course they’re on will end in disaster.  It’s not too late to turn things around; I gladly volunteer to be a proofreader.

Alex Donoghue, Humanoids director, was kind enough to contact me and correct one of my statements:

[quote]While we do not yet have a mailing list, we have accommodated all requests from reviewers that have been made to us thus far, both with preview pages and complimentary review copies.[/quote]