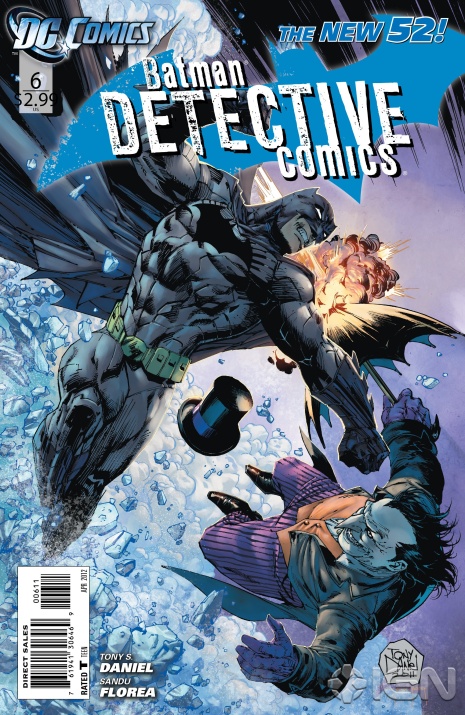 After a tour of duty on Batman with Dick Grayson as the man behind the cowl, Daniel returned to the Dark Knight’s world in writing Detective Comics. Now with Bruce Wayne firmly entrenched as the undisputed caped crusader, Daniel’s run has hit its stride after five issues. This week Comic Book Daily takes a look at issue six of Tony Daniel’s take on Bruce Wayne and the world of Batman.

A killer is on the loose, leaving innocents and thugs alike dead in the wake of his violence. With Snakeskin’s murderous spree seemingly unending, Batman must put the pieces together in order to catch him. Meanwhile, the Penguin prepares to open the Iceberg Casino, while simultaneously building up a closely knit group of criminal associates to aid in the building of his Gotham empire.

In a beach house off the Gotham Harbour, Snakeskin and his female companion, Chase, eye the Penguin’s new casino, brandishing a VIP pass as they dress for their night of violence out on the town. Across the city, Batman discovers the body of a lowly thug whom he had seen perfectly healthy weeks earlier. Desperate to understand the latest wave of Gotham murders, Batman moves from thug to thug, interrogating each; hoping to gather enough information to uncover the individuals responsible. At the casino, Charlotte, Bruce Wayne’s love interest, is caught snooping by a “colleague” named Jill. The two quickly realize their identities and acknowledge each other only as rivaling sisters could. After discovering the identity of the woman who had last spoken to Pog, another dead criminal, he realizes it’s Charlotte and races to the Penguin’s casino to save her. He is too late as Snakeskin creeps from the shadows and stabs Charlotte with a knife, leaving her near lifeless in Batman’s arms.

I felt as though this was a very strong issue for Daniel. Although never having truly written Bruce Wayne prior to his work on Detective Comics, he has nailed the character’s more detective oriented traits, making this more of a methodical, slow brewing stream of revelations. In contrast to Scott Snyder’s Batman title which focuses more on the character of Batman and to his credit the expansion of the mythos, Daniels brings his Batman back to the foundation of the character. His implementation of the classic interrogation tactics and fear inducing actions he’s known for throughout the criminal underworld enable the realism of his “police work,” enhanced further by building upon tidbits of information gradually over the course of several interrogations. I like where the story is heading, and I like the Penguin as a leader of the criminal underworld and the matter in which Daniel is building that aspect of the city’s underbelly. This has been one of the better books of the relaunch, and has remained so through six issues.

There’s nothing to dislike about Daniel’s artwork. The level of detail is astounding, which considering he’s obviously splitting duties between his writing of the book and providing the pencils, it’s unbelievable he’s been able to put forth so such solid work on both ends. Yet that happens to be the case, as Daniel has provided a gritty, dark and wonderfully detailed Dark Knight over the first arc. The third page of the issue, where Batman finds Raju dead, features a very nice half-page panel of Batman staring determinedly at the bathtub holding Raju. Another fantastic page features Batman’s encounter with a desk clerk, who pulls out a shotgun to ward off the Dark Knight, but is outsmarted and blows his own toes off while Batman callously pushes him for information. Each page is a visual treat, although the Iceberg Casino page near the end would not be what it is if not for Morey. I like the colouring work and the contrast between the Casino signs and the fireworks lighting up the sky. Along with the writing, the artwork on all accounts is very strong, providing the second half of the creative one-two punch this title offers.

This is one of the handful of new DC titles which is undeniably great with respect to its writing and artwork. Daniel is truly an all-star, in both writing and providing pencils for Detective Comics. His artwork amazes me with each page, while his story helps keep his iteration of Batman true to the namesake of the title. I like the contrast between this and the main Batman title, providing two fantastic, yet completely different takes on the character which gives you snapshots of Batman’s methodology, while together providing a complete impression of Batman. Detective Comics, as one of the flagship titles of the company, more than holds its own in making Batman an interesting character within the confines of his more detective-based elements.