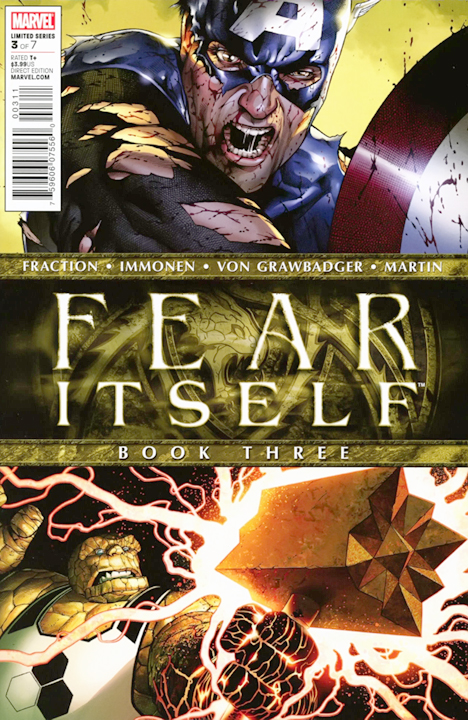 Marvel’s summer blockbuster mini-series continues with issue three of Fear Itself. Facing down the Norse god of fear, Marvel’s superheroes continue to lose some of their own ranks with every new mystical hammer that falls from the sky. At this point it can’t get any worse, right? Forward march!

There’s nothing to fear except fear itself. In this case, the characters of the Marvel universe are faced with their worst fears as the Serpent slithers into their lives. Those fears are made reality as one by one they lose their own, and one by one they realize they may not win this battle.

Bucky, Falcon and Black Widow fight on Washington D.C.’s front lines against Skadi and her Nazi forces. Skadi proclaims her desire to kill Bucky, while Bucky can only rebuff her as she rains the force of her hammer down on Bucky’s shield. In New York, the Future Foundation gathers around another fallen hammer, which the Thing calmly lifts and assumes the identity of Angrir, the breaker of souls. Angrir demolishes the entire street, putting Grimm’s teammates and civilians in danger.

After releasing him, Loki takes Thor to the other Asgardian warriors. Upon arrival, Thor proclaims they must return to earth to protect it from the Serpent. Odin arrives and angrily scolds his son’s youthful arrogance; Thor defiantly stands against his father’s decree. They stand each other down, but Odin decides if Thor wishes to count himself among the slaughtered then he can join the human race as they face the coming onslaught. Odin sends Thor back to earth with Mjolnir.

On the Quincarrier, Steve Rogers feels the itch for battle while en route to Washington and leaps out of the craft, leaving Maria Hill and Sharon Carter in command. Meanwhile, down on the ground Skadi and Bucky continue to battle back and forth. After picking himself back up off the ground, against the advice of Falcon and Black Widow to regroup, Bucky tells them they have to hold the line for there’s no tomorrow if they don’t. Bucky throws his shield at Skadi, knocking her hammer out of her hand as the three heroes assemble and charge her. Bucky leaps into the air to strike a final blow but is belted with a home run swing by Skadi who had quickly regained her hammer. She attacks a fallen Bucky and assaults him with her weapon before tearing off his cybernetic arm and flinging him across the street. Skadi walks away, leaving Falcon and Black Widow to tend to their battered and fallen friend.

Immonen did a fine job on pencils in this issue. Unlike the previous book, much of this installment takes place on the streets of cities across the world, making this much more of an urban warfare issue. This isn’t to say the art lost its quality, as Immonen and Martin came together again for some great battle scenes throughout the issue. This was coupled with a slight nod towards the cosmic nature of the previous issue’s art, sprinkling the issue with some fantastic colouring work. The Bucky-Skadi pencils are beautifully put together and coloured nicely, while the Future Foundation pages start off slow but end with the Thing picking up one of the Serpent’s avatar hammers.

Violence ensues as Thing is inducted into the Serpent’s ranks and he quickly demolishes the street in a wonderfully detailed page showing cars flying, lampposts falling down, and buildings crumbling under the force of Angrir (Thing). My favourite artistic sequence though is saved for the end of the issue during the Bucky-Skadi fight. After disposing him with a massive blow, Skadi proceeds to pummel him with her might and later rips his cybernetic arm off before throwing his body across the street. I liked how the panels of the heroes gathering around Bucky was done. Growing ever weaker, he can barely speak a few lines before passing out and leaving us with a solid white panel. The art maintained itself as a strong point in the series with this issue.

After a rather intense second issue in the mini-series, the third issue was somewhat scaled back comparatively. The issue was solid but altogether uneventful with very little happening in terms of plot development, but that’s to be expected with any mini-series the length of this one. Even still, Fraction’s writing was solid regardless.

The issue saw three major developments. Within its pages, Thing became another of the Serpent’s avatars, Thor was returned to earth with Mjolnir in tow, and Bucky was beaten to a pulp and lost his cybernetic arm. This means three things, and adds to the story dynamic. One, another of Marvel’s literal “heavy hitters” is off the board in Thing. Two, Thor returning to the game is a huge development as he’ll be the only god, much less Asgardian, fighting the Serpent. Finally, I feel like considering the conditions of the story and where a certain Super Soldier was heading, he will likely at the very least assume ownership of the classic red, white and blue shield for the duration of the series (if not the Cap mantle altogether with Bucky seemingly out of commission). Those developments are key in the story and worth watching. Despite the issue being an average reading experience, it was still solid and moved the story along to its next stage. Now moving towards the half-way point I suppose we’ll find out whether society can be inspired away from fear.