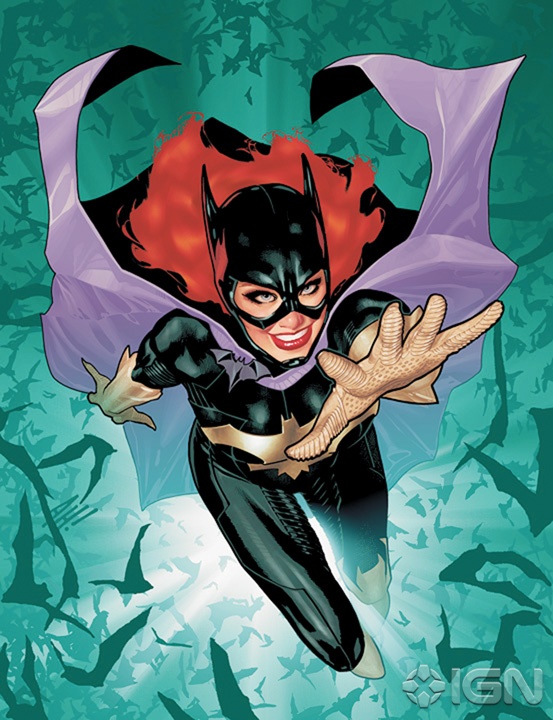 “Barbara Gordon is pretty much my everything. Because of the Batman TV show, she was the reason I fell in love with superheroes. Because she was a redhead who could kick ass, she is the reason I fell in love with comics. She was always forward-looking as Batgirl, a girl who was smarter than the male characters, who had class and elegance and style, as well as tough-as-nails grit. For a long time, there was simply nothing else like her in comics, and for me and a lot of other readers, her every appearance was joyful and explosive.

For many years, I got to write the character as Oracle, and there is to this day, no character who means more to me. This is classic Barbara as she was originally conceived, with a few big surprises. It’s a bit of a shock, to be sure, but we’re doing everything we can to be respectful to this character’s amazing legacy, while presenting something thrilling that a generation of comics readers will be experiencing for the first time…

…Barbara Gordon leaping, fighting, and swinging over Gotham. Now, when citizens of that city look up, they are going to see BATGIRL.

And that is absolutely thrilling.”

What are your thoughts on this?

This is the first time I’ve started to realize that this “reboot” might actually be just that: a reboot.

While I really have no sentimental attachment to Barbara Gordon as Oracle, I’ve always felt that she was a powerful figure that represented the spirit of Gotham City the best. When faced with the worst that the city had to offer she rose above and became better than ever before.

What’s your take on this?

And most importantly…do you think this will last?