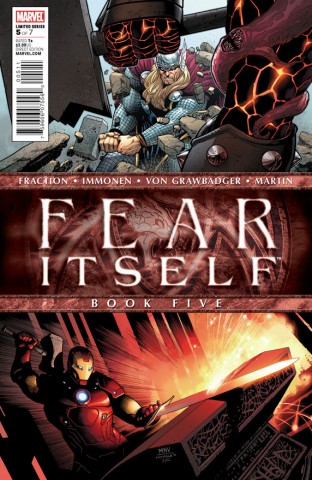 Things don’t appear to be going very well for Marvel’s heroes over in the main Fear Itself title. Their biggest and strongest have all been transformed, chosen to wield mystical hammers that have transformed them physically beyond anything imaginable. They have also experienced great loss on top of it all, adding more weight to each blow as they come. This week we’re checking in on the fifth issue of Matt Fraction’s mini-series, so saddle up and mosey your finger over to whatever apparatus you use to scroll down the page.

There’s nothing to fear except fear itself. In this case, the characters of the Marvel universe are faced with their worst fears as the Serpent slithers into their lives. Those fears are made reality as one by one they lose their own, and one by one they realize they may not win this battle. The Serpent has risen, and the tide of the battle may have swung forever against their favour.

It’s hammer time in the streets of New York. The transformed incarnations of Hulk and Thing stand toe-to-toe with Thor, swinging their hammers wildly as they decimate each other and the entire city block they call their battleground. As their fight continues, the city landscape incurs greater devastation. With Thor on the ropes and Ben Grimm rushing him, Thor summons Mjolnir and delivers a destructive strike to Grimm’s chest, proclaiming his like for Grimm and the sadness that accompanied the blow’s delivery. He notes, however, that he doesn’t harbour the same feelings of comradeship with the Hulk. After some tense moments, Thor and Hulk clash one final time, with Hulk coming out on the short end of things as he’s sent literally into orbit; around the earth. During his disposal, Franklin and Valerie find Ben badly wounded, forcing Franklin to break a promise he made to his parents in order to save Grimm. Elsewhere, Tony Stark attempts to strike a deal with Odin to do what he does best: make weapons. He requests access to Odin’s workshop in order to help turn the tide in their favour. Meanwhile, Steve Rogers’ return as Captain America is greeted by Skadi, who gloats about killing Bucky. They battle for a moment before the Serpent arrives, proclaiming dominion over the earth just as the Avengers assemble on the scene. They’re quickly dispatched, with the final insult to injury coming when Rogers hurls his shield at the Serpent, who easily catches it and destroys it with his bare hands.

The issue primarily featured the three principle members of the Avengers: Tony Stark, Steve Rogers and Thor. With Thor’s piece of the story taking precedence, a fair portion of the issue centered simultaneously on his continued defiance of his father and his desire to protect earth from the present threat. I enjoyed the aura of duty and nobility inherent in how Thor acted combined with the remorse he felt in hurting his friend. It’s an interesting dynamic to the story where one of the Marvel universe’s strongest characters came across as dutiful and noble in every sense of the word, and I feel that’s a testament to Fraction’s writing. He’s additionally being written in such a way where he’s prepared to sacrifice himself to save the world, which further complements those qualities. Where the other two components of the trinity are concerned, there was a rather intuitive dynamic between both Rogers’ story and Stark’s. On the one hand, it would appear that the destruction of the shield is very much symbolic of ultimate defeat with the tide having turned decisively against Rogers and his crew. On the other hand, this part of the story is contrasted against Stark’s request to Odin. Stark asks permission to gain access to Odin’s workshop, whereby he intends to devise weapons of his own to use against the Serpent. This almost instills a sense of hope in the story, that as bad as things are going, there’s s still a glimmer of sunshine left in their darkening days.

Immonen’s work is top-notch from beginning to end, not letting up at any point concerning the level of quality of his pencils nor the overall action. The art nicely complements Fraction’s dialogue. I feel like the battle between Hulk, Thor and Thing was told very well in the opening pages where the dialogue is effectively a foreign dialect and a series of grunts. Here we see each character swinging their respective hammers, with Hulk ultimately connecting with Thor in one panel, and then in a series of panels in the middle of the page, we find Thor hitting the ground hard. As he’s there though, what would be the middle-right panel is broken up into three vertical panels displaying a close-up of Thor calling Mjolnir, another of the Asgardian hammer stirring, and then a final one as it arrives in his hand. Elsewhere, I thought the sequence of panels featuring Steve Rogers going against Skadi was nicely paced and highlighted the hostilities moment-by-moment. Beginning with them at a distance, the two face-off and converse, leading Skadi to proclaim with her arms outstretched that Thor is as good as dead. Immonen then draws the panel back into Skadi’s face, followed by a charging Rogers and ending with a close-up of the famed Super Soldier as he pushes on. I really enjoyed the page where Rogers hurls the shield at the Serpent. Beginning once he picks it up, he throws it directly at the Serpent who effortlessly catches and destroys it in a fantastically drawn and remarkably coloured page. As a whole, the artwork was as solid as it’s been throughout the entire series, even ending nicely on a visibly ominous note as Rogers and Hawkeye woefully stare off into the distance at the destruction.

Issue five of Fear Itself was one of the better issues of the series, brimming with action and fantastic artwork, while posing some interesting twists and plot development. Stark’s request to Odin is curious, albeit sensible considering the way their battle against the Serpent and his Chosen is going. I don’t know if I like the potential for the plot development though. Although I doubt Fraction will create similar weapons to transform Marvel’s heroes, I suspect something will be created to help turn the tide. If the former is the case though, that’s a jokey plot device that works fine for the villains, but is ridiculous if we supplant the concept to the heroic figures of the story. Regardless, I liked the breaking of the shield as it serves as a nice accompanying plot device to the Stark story, again highlighting that although things are really, really bad, there’s still a chance to succeed. Thor’s story is developing rather nicely, and it would appear the Asgardian warrior will go out on his “shield” if we believe the previews at the end of the issue. The most peculiarly interesting part of the story though was Franklin Richards’ use of his powers, which considering their immensity, may very well be the thing the heroes need to succeed. Overall, issue five was a very good installment which definitely picked up the story’s pace, while developing some interesting elements as the mini-series enters its final two issues.