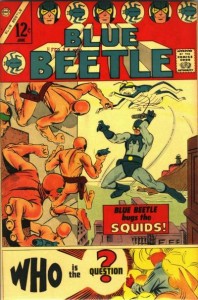 Steve Ditko is one of the true giants of comic books. Ditko’s two major contributions, co-created with Stan Lee, were Dr. Strange and the Amazing Spiderman. In subsequent interviews Ditko has downplayed Lee’s contribution to the Spider-Man character, saying “Lee came up with the name”. Ditko’s famous run on Amazing Spider-Man ended with issue #38 (July/66) and shortly thereafter he left Marvel to work for Charlton Comics.

Creative freedom is most often cited as the reason for the move though I did not find any quotes attributed to Ditko regarding his flight from Marvel.

Blue Beetle #1 (June/67) is Ditko’s masterwork for Charlton. In this comic Ditko gives us his take on that warhorse of heroes, the Blue Beetle (1st appearance back in 1939 and still going strong). But it’s the 7 page Ditko backup story “Who is the Question” that is the main reason I’ve chosen this comic to spotlight. In this story Ditko introduced us to The Question. Vic Sage, a no nonsense TV reporter who dons a special costume designed by Sage’s old professor to fight crime.

I read a lot of how Ditko’s conservative politics come through in the stories and how these were almost complete opposites of the Dr. Strange and Spidey stories he did for Marvel (probably one of the reasons he left Marvel).

Alan Moore, who was originally going to use The Question in Watchmen (he had to create new characters when DC, which had recently acquired a bunch of Charlton properties including The Question, found out he planned on killing off the character) was quoted as saying:

“Despite the fact that Steve Ditko was obviously a hero to the hippies with his psychedelic “Dr. Strange” work and for the 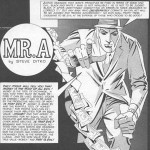 teen angst of Spider-Man, Ditko’s politics were obviously very different from those fans. His views were apparent through his portrayals of Mr. A and the protesters or beatniks that occasionally surfaced in his other work. …yes, Steve Ditko did have a very right-wing agenda… and that probably led to me portraying [Watchmen character] Rorschach as an extremely right-wing character”.

On a cool side note, in DC’s The Question #17 (1988) Vic Sage reads a copy of Watchmen and finds the Rorschach character cool. The issue is an obvious homage to the connection and well played by DC. The Question also shows up in Frank Miller’s Batman: The Dark Knight Strikes Again showing Miller’s respect for the character.

We can actually trace The Questions roots back to a Ditko creation called Mr. A. After leaving Marvel Ditko contributed to a Wally Wood alternative magazine called witzend. Witzend is a celebrated but very obscure publication that began in 1966. In witzend #3 (early 1967) Ditko introduced Mr. A, a character he obviously soon after developed into The Question.

I want to include witzend #3 as undervalued as well but it is not a traditional comic format. Look up witzend for the whole back-story.

Comparing the value of this #1 to similar #1’s from Marvel and DC we can see the injustice. Marvel’s Sub-Mariner #1 published a year later and also a renumbered series (but with no 1st appearances) lists at $450. Showcase #73 featuring Ditko’s Creeper is not a first issue but is a 1st appearance, it was also published in 1968 and it lists at $225.

Charlton’s Blue Beetle #1 delivers a lot and it deserves way more attention than it is getting.