I have been reading DC Retroactive.  When I first heard about it, I thought it was a gimmick (which it is), but I would buy them anyway.  Some of the stories from the 70’s issues were pretty weak.  Some were very good.  Now the Retroactive 80’s books are out, and the stories have been really good.  I have really enjoyed them (especially the reprints from the Reagan decade).

This got me thinking.  What would Marvel do if they got Retro-Active? 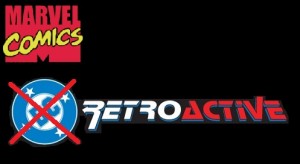 So here is my list for Marvel Retro-Active (a fantasy draft thing).

Daredevil – The writer I would choose for Daredevil would be Dennis O’Neil.  I know what you’re thinking, why not Frank Miller?  Frank Miller had his legendary run on Daredevil, but Dennis O’Neil was the writer before Frank.  I would like to see Dennis have one more shot at ‘Devil.  There must be one story from his 80’s run, that still needs to be told.  I would choose John Cassaday to be the artist to work with O’Neil on this book.  I loved John Cassaday’s covers for Daredevil Shadowland.  I would like to see him do a complete DD book.

Spider-Man – Tom DeFalco would by my writer for Spider-Man.  During Tom DeFalco’s run as writer for Spider-Man, he introduced the black costume, and developed more of Mary Jane’s relationship with Peter and her past.  If he was writing an 80’s version of Amazing Spider-Man, I would like to see the story be about Peter and Mary Jane.  I am a Spider-Man fan from the 80’s, so to me MJ and Peter are married.  I don’t follow Spidey now, so I am lost when it comes to their relationship.  My artist for Spider-Man would be John Romita Jr.  Some might feel this is a cop-out, but he is a legendary Spidey artist, and who wouldn’t like to see his Spidey one more time?

Fantastic Four – The most prolific writer for Fantastic Four during the 80’s was John Byrne.  He is my obvious choice for a retroactive issue.  Steve Epting would be the artist I choose for this book.  Epting drew the first 3 issues of FF.  I thought the art was amazing for FF.  I would like to see a John Byrne story, updated with todays artwork.

The Avengers – I choose Roger Stern to be the writer for Avengers.  I am more familiar with Roger Stern’s run on Superman and Supergirl in the early 90’s.  While I was doing some research on this, I read that Roger Stern helped create West Coast Avengers.  He was later fired from The Avengers in 1987.  Ron Lim would be the artist for the book.  He recently did Captain America & Thor.  That comic book was based on the Marvel Cinematic Universe.  I like his art style for Cap and Thor.  It would be interesting to see what the rest of the Avengers would look like.  Ron Lim did the art for some Captain America books in the early 90’s.

X-Men – Without a doubt, the writer I would choose for X-Men would be Chris Claremont.  He wrote the most X-Men comic books.  It was his vision that made X-Men very popular during the 80’s.  I would like to see one more story from the 80’s from Chris.  There is so much material to choose from to.  The debut of Mister Sinister, Madelyne Pryor, the Siege Perilous or the Australian outback.  There are many great stories to tell.  I would like to have Marc Silvestri as the artist on this book.  I really liked his art on X-Men in the 80’s.  It would be nice to see them team up again.

Thor – With Thor there can only be one writer and artist, Walter Simonson.  I have been reading the Thor Omnibus.  It is amazing.  I love his story telling and his art style.  There has to be one more story from the 80’s (preferably with Beta Ray Bill), that can be told.  He has an epic way of telling a story, and his seqways are brilliant.  I like how he can transition from one story, into the next.

This was an interesting experiment.  Some of the choices are obvious.  Some I had to do a bit of research for.  I would like to see Marvel try this experiment.  There are many great Marvel stories, that should be revisited.  A new comic with a new story and an old one is more accessible to new readers.  Marvel has been releasing omnibuses (like Walter Simonson’s or the forthcoming John Byrne Fantastic Four), which showcases these old stories.  But the shear size of these books are intimidating to new readers.  A “floppy” single issue is economical and easy to read (not like the lap crushing omnibus).

Maybe Marvel will try this.  But for some reason I don’t think they will.  It may look like they are copying their “Direct Competition”