I’m pretty lucky. I’ve got a lot of friends. Not just those of the Facebook variety either. I also happen to be on good terms with a lot of people who work in various types of media; writers, musicians, librarians, designers, comic people, radio people, tv people, etc.

A few weeks ago I had an interesting idea. I wanted to find out who is the greatest superhero of all time. And I was going to ask everyone I knew regardless of their position in fandom or occupation.

And that’s when a fanboy question turned into a real interesting column.

I left the wording of the question very open to interpretation. “Who is the best superhero ever?” Did I mean best comic book superhero? Were non comics characters allowed? Did they have to be strictly a tights wearing kind of hero?

I got back a good chunk of responses. Now granted a good portion of the people I know are a bit on the nerdy side in one category or another but just the pure variety in character selections and interpretations of the question were pretty cool.

Here’s some of the best pieces I got sent. 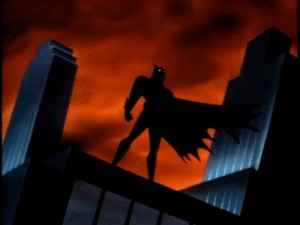 Despite having a Superman tattoo on my shoulder, Batman is my favourite superhero. The comics are great and he has the best villain ever, The Joker. Many superheros have one or two good live action and/or animated movies, but Batman has lots of movies and most of them are absolutely amazing with only a few not so good ones (Catwoman doesn’t count because there is no mention of Batman in it).

Now, Brent gave us a pretty wide berth regarding the definition of “super hero” for this assignment, so I’m going to take his carte blanche and run with it by nominating two characters for the title: Reverend Jesse Custer from the groundbreaking series “Preacher”, and Billy Butcher of Ennis’ newer project, “The Boys”.

Custer gets the vote for embodying all the best qualities of a reluctant hero: the whole “great power, great responsibility” rap. He had power he never wanted foisted on him, and when the root of that power became clear, he took it upon himself to Do The Right Thing and quite literally call the Almighty on His shit. Along the way he went from town to town fixing problems like some kind of hard-drinking Johnny Appleseed, again – not because he particularly wanted to, but because it was the Right Thing To Do. Also, his sidekicks are an Irish vampire, a failed hit-woman, and Arseface: take that, Every Other Hero Sidekick Ever. So Jesse Custer is choice one. Unorthodox? Yeah. Hero material? I’d say so.

Butcher is a harder sell. I don’t typically go in for the “anti-hero” trope, because they’re usually angsty for the sake of it and generally not very interesting. Hell, even Batman is the least interesting character in anything he’s in (and I say that while fortifying my doors and windows against the inevitable rocks and torches hurled by DC fans). But Butcher is different. Far from nursing a childhood trauma until it becomes a pathology, Butcher has damned good reasons for doing the job he’s tasked to do (namely, policing the super hero community and keeping the “supes” in line, quite often through liberal applications of graphic violence). The so-called “heroes” in Ennis’ universe are typically awful people gifted with powers they don’t really understand or deserve, so it falls to Butcher and his gang to ensure they adhere to some kind of higher authority. Like Custer, he’s a Get The Job Done type, but Butcher appeals to a darker place in me because I get the sense he genuinely enjoys keeping the most powerful beings on earth under his thumb. Let’s face it – I would enjoy it too, and so would you. Don’t lie. But Butcher is, ultimately, a good man: he cares about his team and he cares about the common man: he’s what I like to think Superman would have been if he’d landed in South London instead of the Kent’s farm. So Billy Butcher is choice two.

Alex James is a freelance writer and one half of awesome nerd rock duo, Nerds With Guitars

(Brent’s note: Alex isn’t completely up to date with The Boys as he’s only a few trades into the series. If his answer involving Butcher seems a little off, that would be why)

The shortest answer I got from music guru Alan Cross. He posted the following on his website.

Me? I vote for this guy. 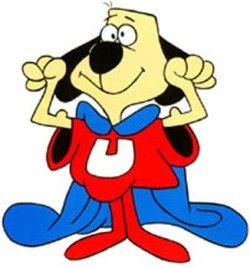 A suggestion I would have never thought of but Alan’s got a good case. Underdog always fought for the little guy and was pretty modest about it. This might also say a lot about Alan’s character… or maybe I’m reading too much into this…

Professional music geek, Alan Cross can be found at www.alancross.ca .

My next answer came from a comic book writer and editor. And surprisingly he didn’t go with a comic book character. 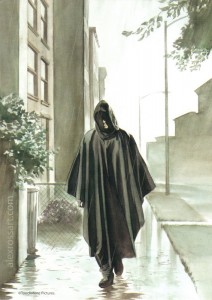 David Dunn from movie Unbreakable. Part everyman like Spider-Man. Part god like Superman. But mostly just a guy trying to do the right thing because he’s the only man who can. He’s a normal guy thrust into extraordinary circumstances and he rises above them. He may not be the most popular, the longest running or the most published superhero, but I think he’s one of the best written ever.

Sean Taylor is a writer and editor who’s latest work includes the short story collection Show Me A Hero and a comic book tie-in for Bad Girls Club. You can follow him at www.taylorverse.com and on twitter.

Batman gets another vote.

Batman. Has the best rogues gallery of villains, some of the best writers in comics have done some of their best work writing batman stories…and he doesn’t have superpowers but has the ability to take almost anyone down…he even has kryptonite just in case you know who gets out of line.

Dave Noble is a regional manager for Rogers +.

So you can see how the answers are pretty diverse. Here’s an interesting line of thought from a guy with a superhero name, Fearless Fred. Believe it or not his first choice is really odd but he makes a good argument.

As many groans as this would get I am VERY Tempted to say Spawn. Not because I love the comic, but I think the idea is fantastic. His limit of power makes for a great analogy for the human condition. 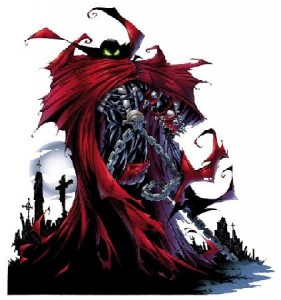 He has a limit on his powers and in the end he will be forced to go back from whence he came … hell.

It’s just like society. We have a limited amount of resources to use and once they’re gone, it’s all over for us. So the length of our survival depends on how well we ration them.

BUT my heart lies with Norrin Radd. That’s right, I’m choosing the Silver Surfer. He has limitless power and has destroyed countless civilizations, but when confronted by human emotion he becomes helpless. Despite humanity consistent stupidity he always sees the potential we have. He’s the eternally depressed optimist. I can admire that. Plus, he has sweet abs. 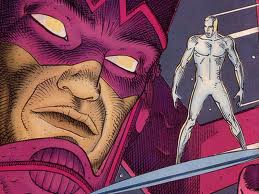 As much as I hate to admit it, Fred makes very valid points for Spawn (SPAWN of all characters!) and Silver Surfer (a character I don’t like very much).

Fearless Fred can be found at Big Sexy Comics or afternoons on Toronto radio station 102.1 The Edge.

And here’s another answer I never saw coming but is well thought out. 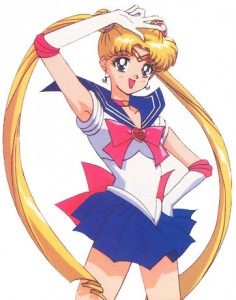 The best superhero ever has got to be Sailor Moon. Now before you laugh or disagree, hear me out. Usagi (Sailor Moon’s non-superhero name) is a 14 year old girl – obsessed with boys, average popularity, terrible at school. All she dreams of is a simple life, when suddenly her world is thrown upside down. She becomes Sailor Moon, and isn’t automatically brave or confident, like some superheroes are. She’s terrified. She hides, cries, runs away, pretty much everything an ordinary person would do when facing monsters without super speed or super strength. All she has is a sparkly tiara (at first) and the power of her conviction. This is the reason she stands out in my mind. She’s a scared, ditzy young girl, but she knows she’s the only one who can save the city, so she steps up. Her power isn’t making people explode in sprays of blood, or hacking limbs off, or shooting people; her power (as cheesy as it may sound) comes from her inner strength and conviction. She uses a “super power” that everyone is capable of having: compassion, strength, will power, and heart. She doesn’t kill – she heals. She finds a non-violent path in a world where lots of heroes use violence. And she matures as the series progresses – her powers change, and so does she. There is a huge difference in Usagi from the first episode of the anime to the last, and I love a character who can evolve. So you may mock her for being weak, or having stupid powers, or being a crybaby, but if you honestly put yourself in the same situation (however unlikely it might be that you would be facing monsters), would you step up like she does, or would you run screaming?

Genvieve Kwant is manager of Children’s and Popular Services for the Brantford Public Library System.

Manga and anime were possibilities I never even considered before this email came in. There are a lot of interesting possibilities  that opened up with this message. Characters

I also reached out to some of the guys at CBD and I got another vote for Batman from columnist Ed Campbell.

If Batman was just a regular guy, who didn’t have the money to make a Batcave, Batmobile and “all those wonderful toys” – Batman would still be Batman. 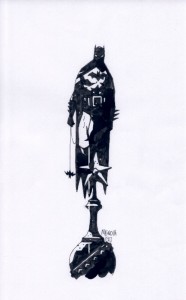 A good example of this was The Return Of Bruce Wayne. No matter the time period, or what Bruce Wayne had with him, he was still Batman. If you took away Superman’s powers, would he still be Superman?

Another great example on why Batman is the best, is Justice League The New Frontier. In the movie, J’onn J’onzz is afraid of fire. Batman notices this and says “I paid a small fortune for a piece of meteor rock to take care of the alien in Metropolis. You… all I’ll need is a book of matches!”

No matter what, Batman has a contingency plan for everything. If he has to, he will take out Superman, and he knows how to do it.

To sum it all up. Batman is the best hero. No matter the time or situation, he will always succeed.

The one thing the Batman votes all have in common is that they all point out that Batman is a man who is a hero in a universe filled with gods.

And to be fair a lot of the other responses said similar things.

So who did I pick? After all, part of this exercise was to give opinions so I could weigh in myself…

Come back next week for part two where I give you my choice for the Best Superhero Ever.