Comic buying and reading is an expensive hobby.  I’m not talking about buying high-grade silver age keys and socking them away in the bank; that’s comic collecting or comic investing.  Right here and now I’m talking about spending your money and buying comic books to read.  Yes, yes, I’ve harped about price, cost and other financial aspects of comics before but this is a new rant.

I stopped buying monthly periodical comics about two years ago when the bulk of them went to $3.99 and as Canadians we were getting bent over the barrel with bizarre exchange rates.  I had two children at the time, three now, and reading comics was taking a back burner to life in general. 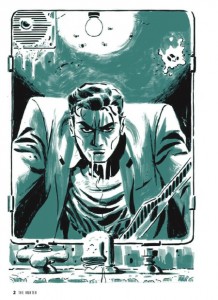 At first I saved a lot as I waited for my regular books to be released in collected editions; that took about six months to catch up and in that time I discovered a lot of books I hadn’t looked at before.  Sure, I had seen them but they were outside my mainstream so they were ignored.  What I found was that comics beyond superheroes seemed, and this is all my perspective, to take longer to read, digest and enjoy.

Since I was reading graphic novels and collected editions I wasn’t concerned about missing an issue: these were self-contained works that could be enjoyed on their own merits.  Books like Asterios Polyp, Parker’s The Hunter, and lots of books from IDW, Dark Horse, Fantagraphics, Drawn & Quarterly and so many more publishers.  Wonderful eye-opening reads.

And then those six months came to an end and I started buying the Marvel and DC books I had been missing.  Sitting down with a $30 on average hardcover I was consuming it in about an hour.  That’s right, $30 for one hour of entertainment, including checking out all the panel backgrounds and stopping to admire the splash pages.  This seemed better than the six to eight minutes I was taking to read a $3.99 comic but not by much.

I could have waited for the trade paperback and saved $10 but I like hardcovers for their durability; luckily I wasn’t buying that many of them so the extra seemed worth it.  Even at $20 for one hour’s entertainment that’s way too much money.  A 3D movie at the theatre will cost you $14 for two hours, a hardcover novel about $25 for at least four hours.  Buying a Blu-Ray for home viewing around $25 for two hours.  I found myself leaving the comic shop every two weeks with $150 worth of books that I was breezing through.

Consoling myself that I owned these books and could re-read them at leisure did little to lift my spirits.  I’ll read a book again after about five years but not very often before that: I remember too much of the story. 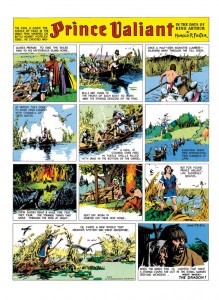 And then I discovered newspaper comic strip reprints.  Prince Valiant, Rip Kirby, Popeye, and more superbly done reprints from IDW and Fantagraphics.  These books cost $50 but took me days and days to read and enjoy: how did I miss these books?  Mostly because before these two publishers came along and started really working on these strips most reprints were done from library newspaper archives and to be honest looked like crap.

Now I began to become a collector of books and not a reader: picking up the next volume out of habit and not because it could stand on its own merits.  Soon I had stacks and stacks of books I hadn’t read so I took a step back and really looked at what I was buying and why.  I’m immersing myself in older content and picking up less and less new work, simply because it all feels the same to me.  That’s just my opinion and we all have one but superheroes fighting super villains doesn’t do as much for me as it once did.  I still love some creators like Alan Davis, Tim Sale and Darwyn Cooke but I need to stretch my buying dollar. 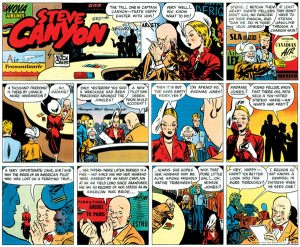 Digital has entered the scene and I do own an iPad2 but I have two issues with the format: I don’t own the book as it’s a digital file locked away with Comixology and what happens if they go under, plus the cost of admission is too high.  Individual issues hover between $0.99 and $2.99 so I’ll go for the split and say on average they’re $2.  If I buy 100 comics and add that to the price of an iPad2 that’s about $700 or really $7 a book.  Add two hundred more and we’re at $900 and $3 a book.  Eventually we’ll have colour tablets that let us read digital comics at a good size for $100 but that’s a ways off.

All that goes out the window when you introduce portability into the mix: for about 1.5 pounds of weight you can have thousands of comics available for reading on a tablet.  The big newspaper strip reprints and Absolute Editions I so enjoy can only be read at a table or spread across your lap.  Yet the sheer size allows exquisitely large art pages so it’s a ping pong game of what you want.

I’m sure there was a point to this but I seem to have lost it along the way.  Oh yes: take a look at what you’re spending on comics and how much entertainment you’re getting from them.  Then try something completely off your radar: every good comic shop will steer you in the right direction.