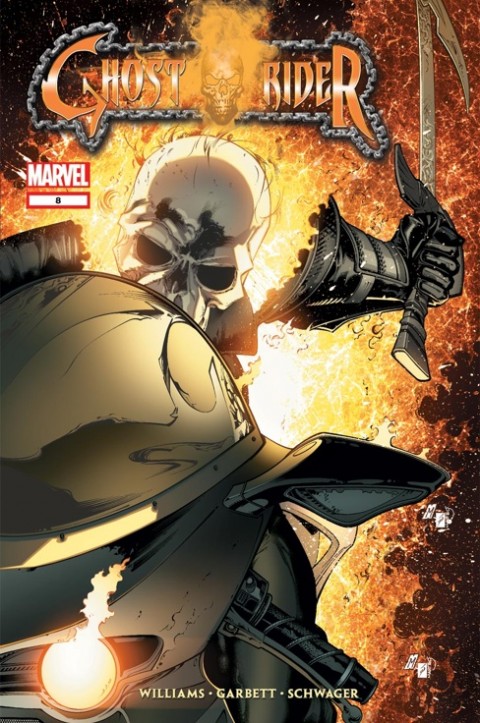 With the movie’s release in sight, Marvel commissioned a new Ghost Rider series to bring the rider of vengeance back into our hands. This week CBD takes a look at issue eight of the series.

Since the beginning of time, the Spirit of Vengeance has existed to seek retribution, roaming the earth guided only by the unquenchable thirst to right society’s wrongs and to punish the wicked. Now with the spirit having passed from Johnny Blaze to a young girl named Alejandra, a new Ghost Rider is born. Yet, it’s one whose upbringing led her to sew chaos and destruction in her path. Now having broken free from her past, she must now deal with the repercussions of her actions as Hawkeye has given chase, hoping to bring her to justice.

After catching up with Alejandra, Hawkeye puts an arrow through her heart. Although it wouldn’t normally stop a Ghost Rider, the mystical amulet attached to the arrow is another story. With Alejandra subdued, Hawkeye resigns himself to his duties and decides to rescue Johnny Blaze from the two sisters, whom at this point had Blaze chained to their motorcycles and were playing chicken with a train. Breaking free of his restraints thanks to Hawkeye’s marksmanship, Blaze escapes his captors and narrowly avoids certain death. Preoccupied with the sisters, Hawkeye had forgotten about Ghost Rider, who by this point began to understand the amulet paralyzes the mystical nature of her existence, but not her inner drive; she quickly pulls the arrow from her chest. Alejandra catches up to the sisters, Blaze and Hawkeye in Tokyo, riding a transformed bullet train into town as Ghost Rider. Chasing the sisters out of the city whilst giving chase on the train, Alejandra apprehends the two and moves to end their lives, but is stopped by Blaze who offers to help her control her calling. They teleport away much to the anger of Barton, who quickly realizes Blaze and Alejandra had taken the mystical amulet.

Having not read previous issues, it’s hard to say how the dynamic between Blaze and Alejandra has developed or what the relationship thus far has been. What it seems as though this series is setting itself up for is a type of mentorship between the two, where Blaze will guide Alejandra’s development as Ghost Rider. It’s not the most original dynamic, but one that I suppose works in this case. The issue picked up with Hawkeye having already caught up with Alejandra and subduing her. The scenes with Hawkeye throughout the book were fun, and I feel like he was well represented in the issue by Williams. It doesn’t feel like much happened though as a whole. We found ourselves at a point in the story where the initial arc seemed to come to a close, where Alejandra experienced an epiphany and began to understand the drive waiting to be unleashed within her, which itself was well done. In that sense the issue felt like the beginning of the book’s grander vision, which I suspect will remain in place until the film. With that in mind, the book’s ending was predictable, which I felt took a bit away from it. It wasn’t altogether a mind-blowing read, despite its fun moments such as Hawkeye taking a flying leap from his glider or Alejandra turning a bullet train into “her ride.” I’m not sure what will come of the book in the long-term, but the series, although not anything to get worked up for, was an enjoyable experience.

Garbett’s artwork helped this book along, although it was not remarkable. I really liked the pages which feature Alejandra’s internal monologue as she gradually realizes her capabilities. Garbett presents each panel with minor differences in her facial expressions and angling, creating a nuanced series of self-realization panels resulting in her breaking her bonds and creating a “new ride” in the form of a fantastic looking Ghost Rider flaming bullet train. There really isn’t much else of note. The artwork was solid and really complemented the story, while the mystical elements of the book, its centerpiece, were nicely coloured by Schwager and Mossa.

Ghost Rider is one of those books that’s hard to gauge, as there’s only so much that can really be done with it considering the limitations of the characters. Another example would be Black Panther or Moon Knight. In an effort to reinvigorate the franchise leading into the film’s release, we find the classic Ghost Rider alter-ego Johnny Blaze acting as a mentor to the title character. This is really the only logical route at this point and I think it’s a good call. As someone who himself has been through a great deal in his life, Blaze is in the perfect position to guide Alejandra, someone with her own terrible upbringing, as she acclimates to her calling. It does remind me a little too much of the Black Panther relaunch featuring the female Panther though, which felt forced. I wasn’t expecting a female lead in this case, but I was surprised by the story and I believe it’s a good opportunity to expand the Ghost Rider mythology while also building up to the eventual reclamation of the mantle by Blaze, who in the meantime should be allowed to develop further as a character. As a whole, the book was not great, but was enjoyable.