While I realise a post like this one could be construed as being seriously and sensationally self-indulgent, I also acknowledge the amount of similar ‘dream-seeking’ nerds out there, whom also aspire to create comics like I do – and due to this basic hope and simply because I’m still typing the words, we’ll soon have a completed post before us and – you may well find yourself still reading…

This next instalment (of an on-going post) about building a story is at the forefront of my excitement in comics today and I’m bursting to share it.  I also realise that Star Wars Comics may have a certain ‘reputation’ (correct me if I’m wrong) and may not be considered as legitimately cool right now as other, second tier books might be?!.  I’d like to at least try (if I may be so bold) to change all that, if it’s even true at all?!  I previously proposed a punchy, prelude to a Storm Trooper story that’s changed slightly and now looks as follows:- It’s an 8 page story/suggestion idea set between Star Wars episode 3 and 4… which stemmed from the news in last week’s Radio Podcast about a new Star Wars TV series set in that same time which is currently in development – a Star Wars shaped blank canvas almost.

Watching the last offering of the newer movies Revenge of the Sith – it’s easy to assume that Vader would spend some time looking for Obi-Wan immediately following their duel on the lava planet Mustafar, where Anakin (Vader) was (kind of) defeated and subjected to a lifetime of hatred inside a rather heavy-looking and cumbersome black suit – and with that in mind, it’s easy to suggest a few moments in those early Empire years where, Vader might have visited a few potential hiding spots in the Galaxy – but was unsuccessful in his search.

The initial submission idea was a rather ‘tongue-in-cheek’ take, on a newly appointed Storm Trooper… receiving his offer letter, nervously turning up to his first day of work (in his shiny, new white uniform) and kind of… lightly and quite comedicly exploring his first trip to the Death Star canteen and his first ‘Attention of the Guard’ at the arrival of Vader or the Emperor etc and – while this would actually be quite funny and interesting, I think a serious, moody and mildly violent submission idea, would be that bit more palatable for an inquisitive editor… should it even find its way into the curious hands of an actual Editor in real life.

The new Submission idea has developed into a plot to assassinate Darth Vader designed by a slightly crazy man (currently nameless) whom believes himself to be a Jedi in every sense but, the reality is that he’s a very unstable and unpredictable non-Jedi, though his self-taught combat techniques and fighting style are not to be ignored, his core beliefs are depraved from the beliefs of the Jedi – even if they do share common interests.  He’s even developed his own form of Lightsaber which functions in combat like a pair of Nunchucks, with one lightsaber ‘blade’ free to swing in the direction of the enemy on the end of a short chain attached to the handle.   This man’s master plan is to infiltrate the Empire at its core and sign up to join the imperial Storm Troopers aboard the Empire’s home Fleet  –  Once appointed, he’ll wait for his perfect opportunity to assassinate Lord Vader at his earliest opportunity, somehow side-stepping Vader’s emotional investment in ‘the Force’ and maintaining a believable level of effort in the Troopers.   This could be an interesting little piece and would probably best suit a short, one-off series but, it’s always tricky to tell an interesting and engaging story at a point in time where, existing story is already common knowledge after anything and everything that is potentially available to my imagination in its creation… if that makes any sense at all?!

Please find a couple of storyboarded pages below which, I’ll obviously develop, refine and produce ‘finished pencils’ for – before submitting to Dark Horse directly (for them to simply laugh at and ignore probably). 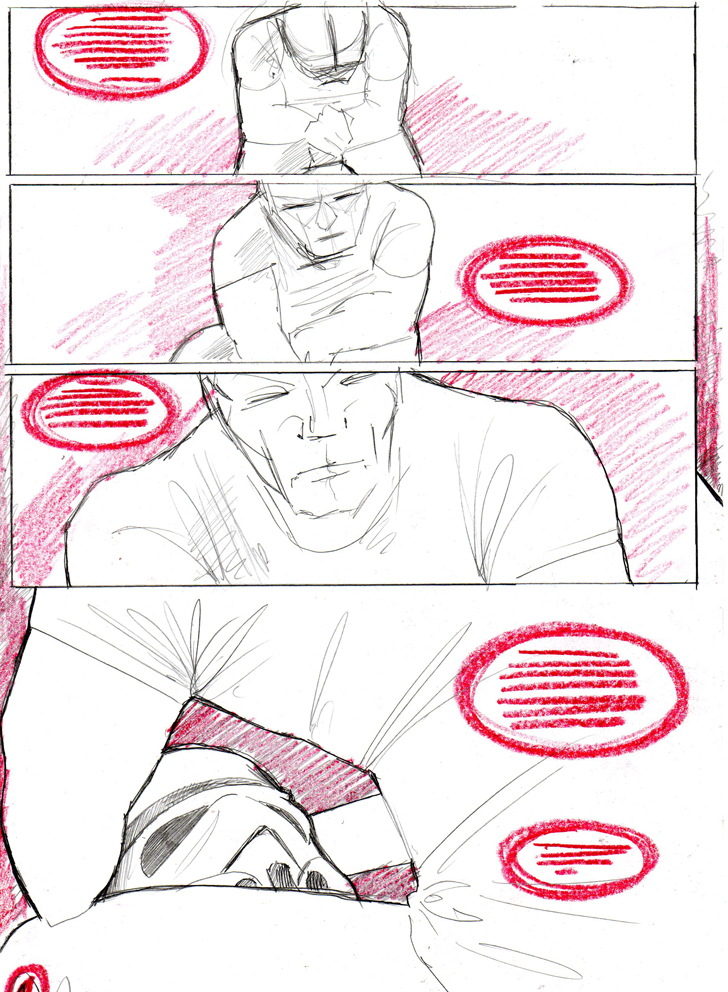 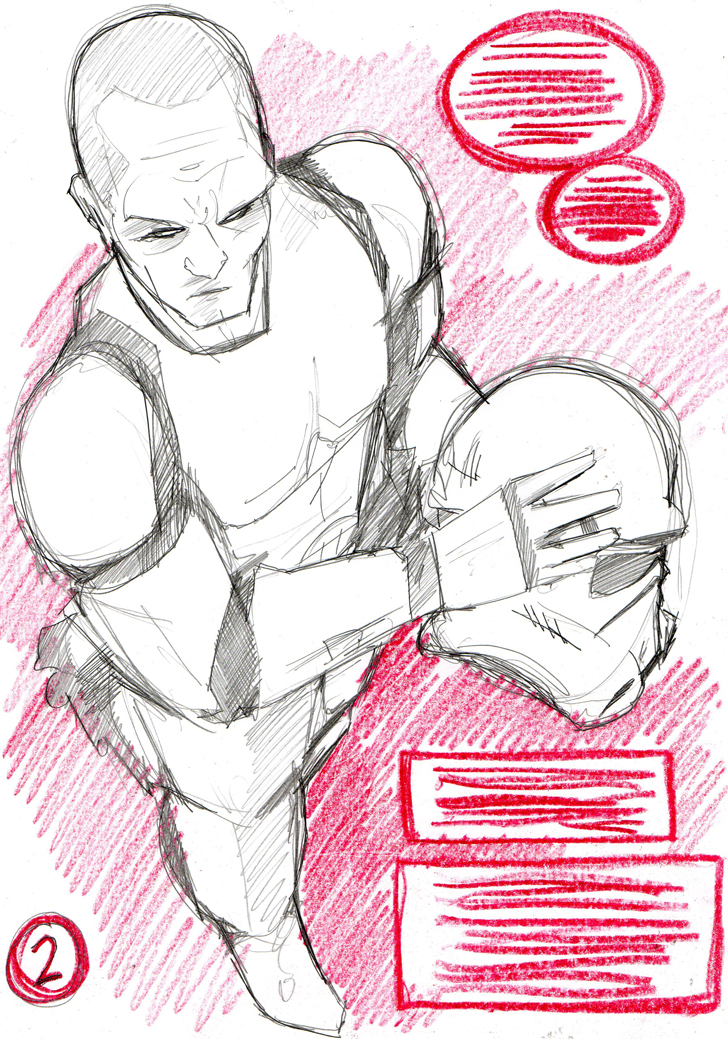 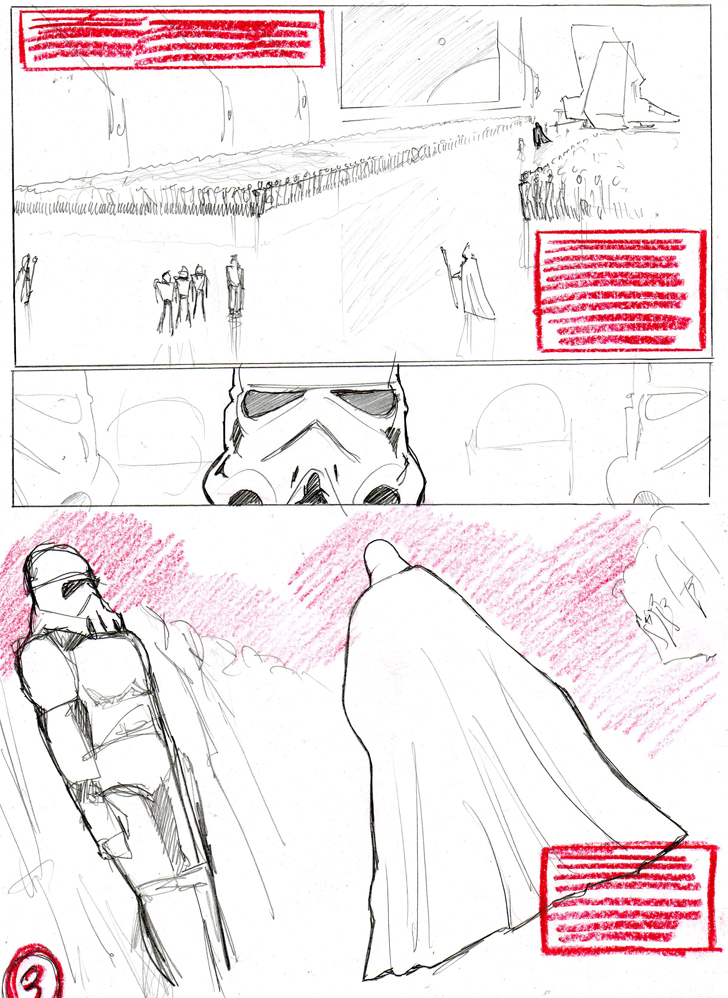