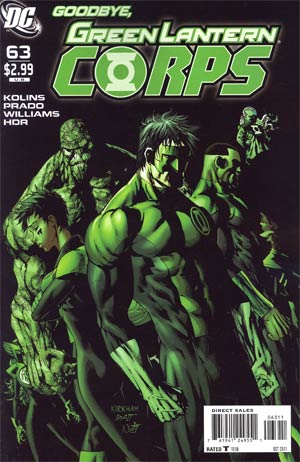 With the DC relaunch right around the corner, many series are winding down their runs. The Green Lantern Corps series released its final issue of the volume last week, so let’s have a look this last installment.

In the wake of the War of Green Lanterns, the Corps has been left to rebuild after their ranks and allegiances have been shattered. With friendships, relationships and trust genuinely dissipating, infighting runs rampant as their ranks debate (or fight) about what they should do with their prisoners of war, or whom they should allow into the Corps altogether.

Broken into intertwining stories based on Oa, GLC #63 follows the stories of Boodika, Ry’Jll, and Kyle Rayner as they try to pick up the pieces of their lives. Boodika’s story chronicles the process of her repairs/convalescence. Subconsciously we’re taken on the journey of her induction into the Corps while still living on her home planet of Bellatrix, a planet of bred warriors raised to conquer all and win. This is contrasted against her transformation into one of the cybernetic Alpha Lanterns and subsequent controlling by Cyborg Superman. In the wake of that battle, we discover her worst fear: defeat. Now with her emotions and aggressive thirst for victory restored, the issue asks what she will do in the aftermath of so many defeats. I thought this was a nice little story that really adds to the lore of the Green Lanterns. The Alphas were really intended to be the combination of the best qualities inherent to the Manhunters and Green Lanterns Corps, yet we find that emotion in this sense is not limited to sentience. Even when stripped of who we are to this degree, we find that the capability to feel is not limited to one walk of life. Rather, it’s comprehensive.

Chapter two focuses more on a Green Lantern named Ry’Jll as she’s visited by Lanterns Voz and G’hu. Ry’Jll is a young, newly recruited Lantern whose home planet was one of peace. She recounts her recent experiences as a Corps member, as well as a promise the Guardians had made her, one ensuring that she would not have to become involved in war. She tearfully recalls how she was forced by Krona to break the will of others, spread fear and how the faces of all who perished will haunt her forever.  After a short bout with post-traumatic stress, Salaak arrives to scold Voz and G’hu for abandoning their duties. After trying to argue they don’t work for the Guardians, Salaak counters by saying the work they do was never about working for the Guardians. Rather, they serve all life throughout the universe. This was another neat little tale that looks at another aspect of the recent conflicts, this being more towards the long-standing impacts of violence on people. It examines the realities that war changes individuals and haunts their memories throughout their lives. You can never forget those experiences, and I felt this chapter really got that point across in addition to Salaak’s argument about who the Corps serves and why they do what they do.

The third chapter brings us to another part of Oa, the lunchroom. With humans not the most popular beings on Oa at the moment, Kyle Rayner finds his meal interrupted by Lantern Turytt, who swats his lunch tray from the table. A fight breaks out with Rayner quickly getting the better of him, until the rest of the lunchroom jumps in to uneven the odds, chanting “Humans out!” repeatedly until Tomar-Tu steps in to stop the mob and assuring Kyle’s safety by teleporting him away. Although not as poignant as the first two chapters, the third story reintroduces the ongoing, almost unspoken narrative regarding the perception of humans within the Corps, indicating that for many they are an arrogant and depreciated life form not worth their weight or trouble. It also establishes an additional narrative pertaining to how we grieve and deal with conflict, by lashing out at the easiest targets. I thought the mob mentality in the chapter was interesting, although not a new plot device.

In the fourth chapter, the issue takes a different tone. While all these events are going on, a distress call comes in from another planet and the Corps is immediately called into action. Boodika proclaims all she wants is another chance to fight and win, which her counsellor remarks is simply amazing. Vox and Gh’u leap into action at the call, while the lunchroom empties out and its members also fly into action lead by Tomar and Salaak. This story highlights one very simple point about the Corps. It doesn’t who they are, where they’re from, or what disagreements they have with each other, all that matters is assuring the universe is safe. It’s a very idealistic story, but one I feel is a touchstone of what the Corps represents in its mythology.

The artwork is split up between the four chapters, anchored collectively by Joe Prado, Scott Kolins, Freddie Williams and Daniel HDR. I’ve become quite a fan of Prado’s work over the last year and I felt it was most reminiscent of how I think a Green Lantern book should be drawn, at least relating to its more action oriented dynamics. Hi-Fi, who coloured the majority of the issue, did a tremendous job here to bring out the best in Prado’s work. Especially his recounting of Boodika’s transformation procedure and the final pages of her lament. In the second chapter, Kolins’ work is very nice, but what stands out to me are the pages specific to Ry’Jll. Kolins does a remarkable job in drawing the character’s emotional trauma. Beginning with a single falling tear across her cheek, the following panel presents an amazing contrast between the horrors of war and the terrible impact it’s had on the young Green Lantern; her lips quivering as more tears roll down her face. It’s a very emotional piece of work, and nicely captures the after effects of war’s horrors. The third chapter’s art removed the emotion of the previous two chapters and was action-focused. I enjoyed Williams’ pencils in this section, and really liked the addition of  “motion” to the characters’ body parts, examples being when Kyle kicks Turytt in the face, or when Turytt smacks Rayner’s lunch-tray from the table. Williams’ best contribution, though, was the page where Tomar arrived, hovering in the air as he enveloped Kyle in a protective bubble before transporting him away. Hi-Fi did a fantastic job here and I hope to see more of him in the future, as he’s always been a strong colourist. The fourth chapter was largely uneventful, however ending with a great splash-page of the Corps flying into action, highlighting that despite everything, they are team dedicated to a common cause, which I felt was a fitting way to end the volume artistically.

This wasn’t a great issue, but was a solid, fitting way to end the run considering the forthcoming relaunch. I think it would have been better to have had Bedard place the final punctuation mark on the volume given that he worked on the book for the last year, but I feel as though Kolins still did a good job of tying up what it means to be a member of the Corps into a nice little bow. I liked how the issue was laid out, while the four chapters each told a nice story analyzing various dynamics of war. Although I typically don’t like books that try to tell too many stories, which often leads to a lack of cohesiveness in the story and art, this book pulled it all together very well. This was a very good send-off to the series before Tomasi returns to the book he left over a year ago to write Emerald Warriors. However, it’s a book that’s mostly going to appeal to Green Lantern fans and very few beyond that demographic.