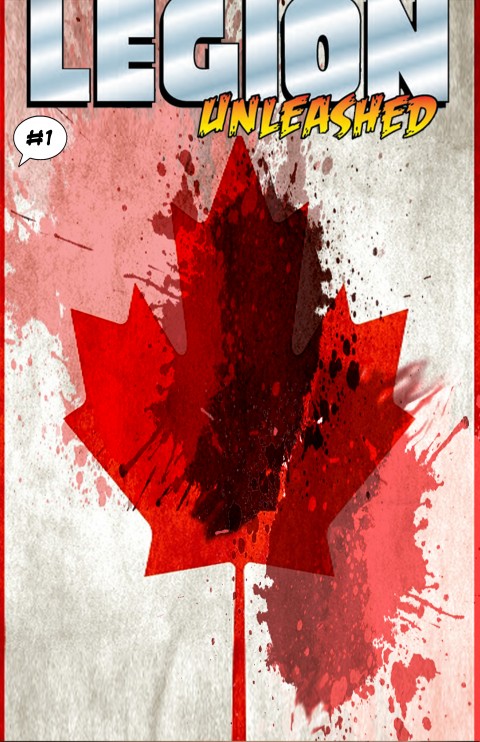 Where many superhero comics featuring Canadian characters fail is the inclusion of a given character’s nationality not necessarily as an organic component of the story, but rather as a gimmick to dress a title up to encourage national interest. This is hardly the case with Evans’ Canadian superhero title, Legion Unleashed, as we find the opposite to be true when a band of Canadian heroes of varying cultural backgrounds come together to tackle contemporary threats to national security, while also coming face-to-face with the country’s greatest myths and legends.

Legion Unleashed is set in present day Canada, in a world where governments began to acknowledge the existence of “enhanced” human beings at the turn of the 21st century. Understanding the potential threat these individuals pose to Earth, the United Nations passed a resolution that would classify these humans as “Homo Sapien Alpha,” while any criminal act by these individuals would be considered an “Omega Felony” and lead to their prosecution by either their national governments or the International Court of Justice (ICJ). Canada was the first country to introduce a team of agents trained specifically to stop Omega-level threats in Canada and abroad. These registered heroes have the backing of the Canadian government, yet there are those who operate without official state approval.

The first issue of Evans‘ title begins with its focus on two such super powered individuals, a rebellious man named Black Flag and a native shaman named Morgan Snowfall. The book hones in on the two characters as they investigate a mass grave near Tazin Lake, Saskatchewan. The action quickly picks up as the book’s supernatural elements take centre stage when a shape-shifting assailant attacks both men, only to be fended off by Snowfall. Being familiar with the concept of a “skin-walker,” Evans injects pieces of Native Canadian mythology into the story by casting a Navajo man as the antagonist of their investigation, a character which Evans expands further with a bonus biography of the “Yenaldlooshi,” an ancient skin-walker, in the digital version of the issue. The story feels as though these plot devices are not being used for the sake of their inclusion, but rather that they are well researched and included because it fits the story being told.

Subsequent pages shift the book’s paradigm to the other end of the superhero spectrum, bringing the Canadian Legion, Canada’s registered superheroes, to the forefront. The scene switches from Saskatchewan to Niagara Falls, Ontario where the fictional Minister of Public Safety, Victor MacDonald, prepares to introduce the “Canadian Legion” to the media.  Situated at a platform near the mouth of the falls, MacDonald slips on a puddle and nearly stumbles into the raging waterfall; he’s quickly saved by Plasti-Girl, revealing herself alongside her teammates Inspector Melissa Maple, The Horse and The Arrow. The characters’ introductions were handled nicely, organically bringing the four Canadian heroes into the picture without a standard roll-call and explicit explanation of their powers a la Uncanny X-Men. Instead, Evans maintains the veil of mystery shrouding the characters, leaving their capabilities to the imagination of the reader. Evans’ subtle storytelling over two pages seamlessly highlights the powers of one character, while establishing the leader of the group in Melissa Maple. The trend continues as the issue moves forward to the Canadian-U.S. summit, where we find The Arrow proving his namesake true as a master archer as the Yenaldlooshi attacks the summit in search of his next victim. Threading the two components of the book together–the Saskatchewan investigation and the revelation of the Canadian Legion–Evans brings Black Flag and Morgan Snowfall into contact with the Legion as they converge on their mutual target just as he attacks the delegates. It’s here we also discover the power set of The Horse, who displays the ability to project force fields, using the ability to protect the delegates. The sole question of the team remains Melissa Maple, whose power is not clearly demonstrated, leaving it unclear whether her power is persuasive or if she just speaks loudly and people heed her commands. In either case, it’s very clear when her power is in use as the lettering changes to a solid bright red with reverberating ovals around her word bubbles.

Evans successfully avoided the formulaic roll-call and powers display team books employ, instead introducing the characters together and having them use their abilities at varying points of the issue. This helped keep the book from becoming over-saturated or over-loaded with information for the reader to process. Secondly, Evans drew a very distinct line between the definition of heroism, dividing the actions of the principal characters between state-sponsored action and outright vigilantism. The final act of the book distinguishes the two mindsets, starkly contrasting Black Flag and Snowfall with the rest of the Legion.

Matching Evans’ storytelling is artist Jake Bilbao and colourist Thu Thai. Together they present a wonderfully beautiful display of artistry over the book’s 20-something pages. From the landscape of Tazin Lake to Niagara Falls, the duo composes a visual symphony that does the locales justice, especially in the case of the latter. Bilbao’s work comes with its own nuances early in the issue upon the opening salvo of fisticuffs between Black Flag and two attacking bears. Armed only with brass knuckles, he knocks the bear senseless with a smirk on his face. Upon the arrival of a second bear, Morgan Snowfall summons the icy elements to subdue the beast as the wintery winds and ice engulf and defeat the second animal. Bilbao continues his impressive work as the issue progresses, concocting a fun series of panels featuring Plasti-Girl saving Minister MacDonald as her arm darts around the shoulder of Melissa Maple, while her head swoops directly to her left into the media’s waiting microphones. The final pages of the book steals the experience from the rest of the issue’s art, featuring a raging battle between the Legion, Black Flag and Snowfall and the Yenaldlooshi.With fantastic action panels ranging from a large wolf storming through the convention’s walls to Black Flag and Snowfall’s subduing of the skin-walker, the issue fails to let up on its visual onslaught, overwhelming the reader with some truly great accompanying art to Evans’ story.

Legion Unleashed is not only a great book featuring Canadian characters, but it’s a very strong book on its own merits. The story is told at an even pace, with Evans’ writing allowing the characters to breathe and develop at their own speed. The title wades into deeper political waters than previous books featuring government sponsored heroes concerning the clear distinctions that exist between registered heroes and vigilantes. Evans’ characters navigate beyond the safe operations of simple co-existence by having Black Flag and Morgan Snowfall take action beyond what the Legion is sanctioned to do, creating a divisive philosophical rift between the two parties. It’s very successful in this respect, creating great story opportunities for future arcs. Its further incorporation of a diverse cultural background for its characters and marriage with Canadian and Native Canadian legends makes this a great read that can be a very political, yet very fun book featuring Canadian superheroes.