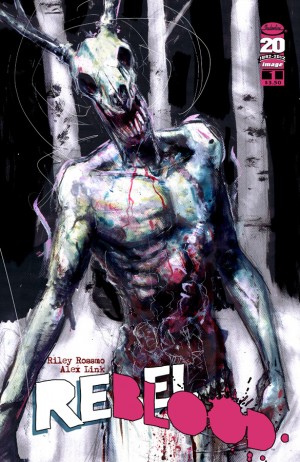 Considering the overwhelming popularity of zombies due in large part to the successes of the Walking Dead comic and television series, it’s difficult to revolutionize the zombie genre. Even with that in mind, that’s what co-plotters Alex Link and Riley Rossmo have attempted to do with their creator-owned series, Rebel Blood.

The series follows Chuck Neville, a former firefighter turned forest ranger who was let go after he was injured on the job. The book also features an as yet to be fully introduced supporting cast, notably including Chuck’s wife and child in several flashback panels that double as nightmare scenarios. After experiencing a number of visions while at his post, Chuck is awakened by the sound of his radio and spies a rabid owl that had crashed into his tower’s window. It’s here where Rebel Blood takes a step ahead of Walking Dead in hinting towards the origin of the virus by insinuating it to be partially spread by wildlife, which goes far in offering a future resolution to the cause of the outbreak for readers.

While the story’s opening felt muddled at first, upon reviewing the introduction following the mutated wolf pages, Link did a great job of establishing the context for Chuck’s life in explaining how he came to arrive at the watchtower as a forest ranger. His life is recounted over three pages, dividing the reader’s attention between a narrative conversation differentiated by two differently coloured dialogue boxes to indicate a conversation between two people. As the reader follows this dialogue over the three pages, we gleam varying events from Chuck’s life as they developed playing out in his head, including his accident, his being fired and his wife pushing him to take control of his life before ultimately leaving him. All of this builds towards the revelation that the opening pages occur as a recounting in Chuck’s imagination as he has a conversation with a blond haired woman atop his tower as they share a coffee. It’s a similar tactic used later in the issue after the owl crashes into his tower window.

In the latter half of the issue, Chuck ventures out into the woods in search of answers both in connection to a previous gunshot and the evidently rabid animals reported to him by another ranger named Mike over the radio. As he walks through the forest, he envisions his family centered in several different scenarios where he saves them from the threat, where they’re killed outright and one where his wife is killed, he saves his son and then sleeps with the blond-haired woman he shared a coffee with; a single panel of them holding hands outside their cabin indicates he would like to start a relationship with her. Between the visions is a fight with a pack of mutated wolves, bringing the story full circle from the opening chaos of the same wolf attack in the first pages. Combined with the opening narrative conversation, Link and Rossmo have put together a solid piece of storytelling which at least a huge portion of is told through the internal thought processes of a man as he mulls over and ponders the world around him and the decisions and desires that drive him. What was nice is that in the end of the issue, for all his projections of different scenarios, Chuck finds not what he expected in his family being torn to shreds and devoured. Rather, as several zombies make their way towards the cabin Chuck eventually arrives at, he finds a room littered with human carcasses fit for display in a slaughterhouse. This indicates that regardless of his recent downward spiral, family is centric to Chuck, while concurrently, this final scene shows us that the imaginary is ever-present in our lives and that more often than not reality slaps it across the nose. It also points towards an inherent unpredictability this book espouses, as we as readers may not ever be able to fully expect what’s next in Rebel Blood. That in itself is the mark of a good story.

The other half of the creative team, Riley Rossmo, provides some viciously violent art which is nicely drawn, although there are instances such as when Chuck is walking through the forest in the middle of the book where his face seems incomplete or has all too flattened features. Where Rossmo excels in this issue is his adaptability to play with concepts of light and dark against the horrific elements of the story’s premise, easily transitioning between beautiful snowy landscapes and horrific visions deep within the darkened recesses of Chuck’s mind. Playing against these artistic elements is his colouring which takes precedence in the nightmare scenarios playing out in Chuck’s thoughts. Here Rossmo colours the panels with a greenish tone that clearly differentiates it from reality, similarly to Mitch Gerads’ colouring in the first issue of Boom’s Starborn series. The core of the book’s art is its violence, and here there’s no shortage of stomach churning beauty as Rossmo offers mutated wolves, owls and human zombies, ending the issue with a horror show of rats feeding from human carcasses hanging upside down in the cabin. While this is the heart of the book, Rossmo’s subtleties didn’t go unnoticed, as the opening pages were seamlessly executed to perfection according to the team’s script, pulling off the narrative conversation quite well while painting a completely different picture for the reader that isn’t understood until Chuck and the blond-haired woman are standing on the tower enjoying their coffee.

While not a fan of the zombie genre, Rebel Blood did enough interesting things with their storytelling both in text and artistically to warrant further reading. Although it’s hard to praise this title fully ahead of any other zombie book given the pop-cultural dominance of the genre, Link and Rossmo have crafted a layered tale that aims to simultaneously explore a man’s psyche while ideally scaring readers with grotesquely horrific, wonderful visuals.