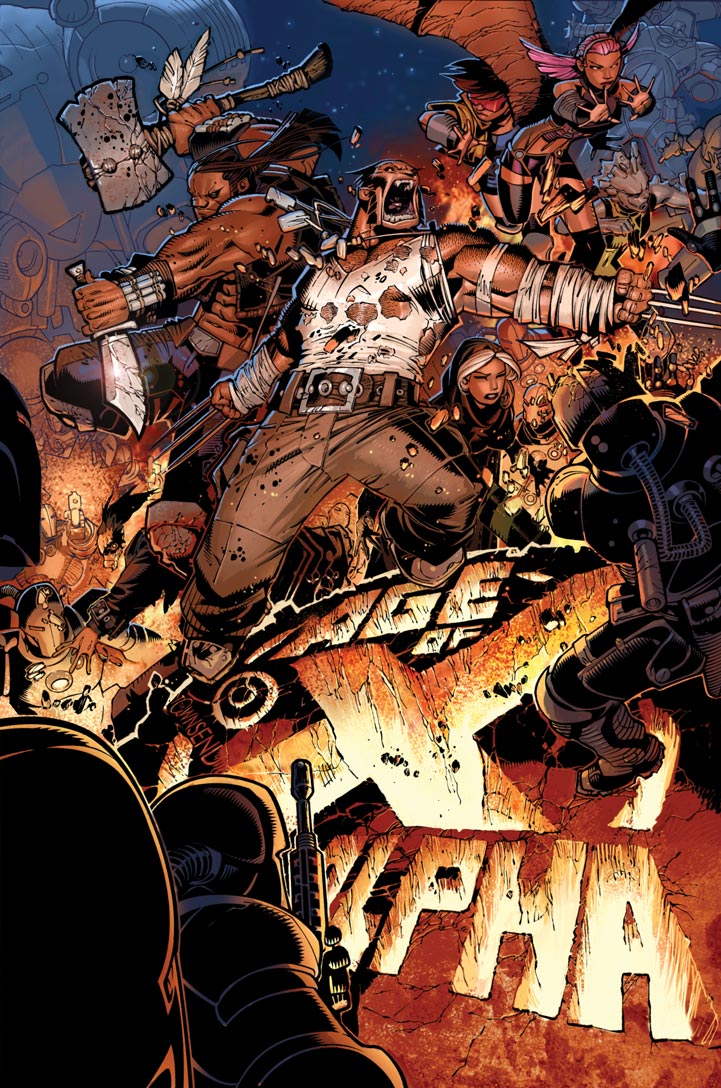 If you’ve picked up a Marvel comic in the last few months and navigated most comic book websites in that time, you’ll have no doubt seen promos for the Age of X story. Carey has yet to go into tremendous detail as to its overall purpose, but I suppose that’s the allure for stories like this. This week I’m looking at the one-shot that will kick off the story written by the continually solid Mike Carey. Here…we…go!

In a world where the X-Men never existed and mutantkind has been hunted to extinction, the few remaining mutants band together to make their last stand. The final war starts here… 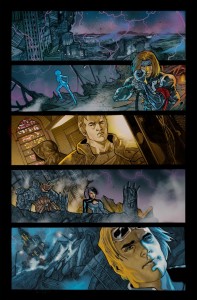 The issue primarily functions through flashbacks. A group of mutants have gathered within the boundaries of Fortress X, a sanctuary for mutants as they strive to avoid extinction at the hands of the human race.  Gathered around a campfire, Namor, Storm, Basilisk (Scott Summers), Nightmare among others share their stories about what they remember before this dystopian reality.

First we see Scott’s experiences as the human race’s final death knell to its mutant captives on Alcatraz. We learn Scott’s power’s were used to execute inmates, with his captors going so far as to restrain him to a vertical gurney, and cutting off his eyelids so he couldn’t close his eyes to shut his powers off. Scott is used to murder mutants one final time by Arcade, but as he’s being escorted back to his cell, Scott manages to escape his restraints and escapes; he sets the rest of the prison free and tells them all to find a place to hide, because they’ll be coming for them. The mutants around the campfire sum up the toll it took on Scott, implying he never really left the prison; a huge part of him died there. 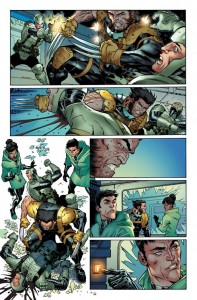 The issue briefly glosses over an encounter between Sam Guthrie and Paige as they come into contact with local authorities, and moves to another where Dr. Rao recalls an encounter with Wolverine inside a research facility. Wolverine had arrived to destroy the purported cure to the X-gene and tries to disrupt its production. After a brief altercation with security, Dr. Rao tells Wolverine of one means to destroy the serum; he can metabolize it with his healing factor. Rao injects nearly every dose of the serum into Wolverine until the facility’s lead researcher tries to stop them. Rao regains the advantage and puts him out of commission as more security arrives. With Wolverine in bad shape and at the mercy of the security team, Dr. Rao pleads for God’s forgiveness, saying she has a life to save.

The final story in the issue focused on Magneto and chronicles the destruction of an entire city block as the military watches on. Back at the campfire the mutants recount Magneto’s actions and subsequent building of Fortress-X. The issue concludes with opposition forces breaking past the Fortress’ barricades and the mutants preparing to mark their burial grounds with an ‘X’. 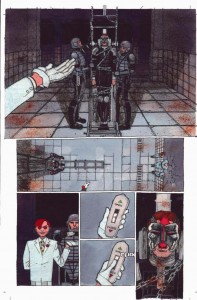 The art was very spotty across the entire issue, and leaving the overall presentation for a first issue very lacking. Great comics meld great art with great story telling, and this one-shot is definitely lacking in the former. What’s even more irritating is the difficulty to pin down whom is exactly responsible for specific pages.

The opening campfire scenes and those that followed were okay, but not great. There were glimpses of decent pencil work with Sam Guthrie, Gambit and Namor/Storm. Other than that, it was very low-scale in overall quality. There was nothing else that really stood out throughout the rest of the issue during the campfire scenes. Because those were basically the lynchpin of the artwork in between the flashbacks, it does a poor job of holding the issue together.

The Basilisk/Scott Summers art in Alcatraz was just atrocious. 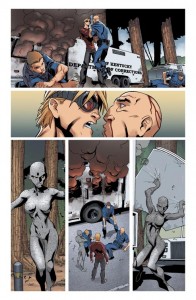 Part way through the book the art picks up in quality. The Sam Guthrie/Paige and Wolverine/Rao pages were better drawn and infinitely more colourfully detailed than the rest of the art in the book. With the Guthrie art though there wasn’t anything that particularly stood out; the layout was basic and uninspired. The Wolverine art however was the best collection of work in the book, using a much more dynamic panel structure, complemented by some relatively well executed action scenes with Wolverine leaping at security. This artists’ models were much more expressive than the other artists’ contributions in the book and at times reminded me of Ivan Reis’ work on a variety of DC books. I must say too that one of the better panels were the close-ups of Wolverine as he’s perspiring  and gritting his teeth. Both of these look really good.

The Magneto art was a step forward in the direction from the earlier pages in the book, although a step back from the Wolverine art. There were some great destructive scenes of the city landscape, but I’m not sure about his wardrobe; he looks a like an 18th century diplomat in one panel. There’s very little to say about it really. It was solid, but not great

Overall I felt that the lack of artistic continuity hurt the issue’s presentation and took a lot away from the overall reading experience. I certainly question the decision to use so many artists and styles for one book, because it didn’t work in the least. 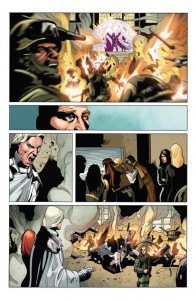 For as much as this series has been promoted over the last couple of months, it was a letdown. I understand that part of its allure is to slowly reveal the events of this alternate reality that leads mutantkind to the brink of extinction, but I don’t feel the overwhelming need to continue reading this story. I have confidence in Mike Carey as a writer, but that has been waning over the last few issues of X-Men Legacy. This issue didn’t wow me as a story, which combined with the strange artistic decisions compels me to avoid this storyline altogether. I think depending on how Carey executes the story as it moves forward will determine the overall quality of the reading experience, because I certainly feel like there is storytelling potential here with characters like Magneto and Summers, and ultimately the fate of the other mutants and how they all interact with their environments as they face the all too certain end of their race is mildly intriguing.

There are still eight issues to go between the Universe issues and the crossovers between New Mutants and Carey’s X-Men Legacy, so it’s anyone’s guess how this will shape up at this point. I’m leery of the Universe books, and haven’t read New Mutants in quite some time. Without being familiar with the teams assigned to both, it’s hard to say whether this story will be worth the investment. I think it may be worth it to take a look at X-Men Legacy #245 (chapter one) in order to get a better feel for the story and where it’s headed as a whole. If you’re not an X-Men fan though, I can’t see there being much interest in this crossover from the general comic book crowd.