Welcome to another episode of the Couch, hosted by yours truly. It’s the first one in a while, so I apologize to my handful of fans out there in CBD land. To make up for it though, I thought I’d weigh-in on Buffy Season Eight and maybe forecast on the future of our favourite slayer. 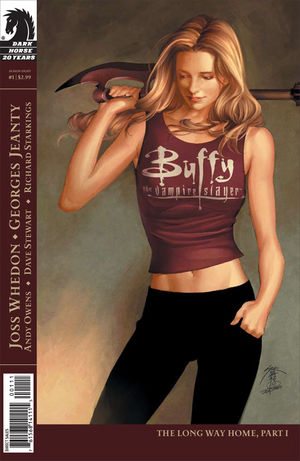 Season 8 – The Kid in a Candy Store Effect

This season was longer than it should have been, and even still tried to do too much. Joss, my venerably supreme overlord of geekiness even acknowledged this in his afterword in the final issue’s conclusion. Joss was given the infinite budget this medium offers and he literally did everything he could have possibly done this season, except sensibly keep the story on track for the entire run. More than any other criticism I can think of for this season, I feel like Season Eight could have been told more concisely written than it was, something novelist and part-time comic book scribe Brad Meltzer even pointed out. This story did not need to be told over 40 issues and could have been trimmed down to a standard 22-25 issues, perhaps 30. This story took nearly three-and-a-half years to tell , and I felt like the story was long and exaggerated. Putting that into context, I was only following along in trade paperbacks until Last Gleaming; I began in Fall 2009. I can only imagine what it was like for fans following along since issue one.

I felt like there was a lot of filler and a lot of unnecessary plot.  Season Eight’s Fray story arc could have been told in two or three issues similarly to the plethora of one-shots. Instead it was given much of an entire arc unnecessarily since it wasn’t addressed again other than the obvious connection in the finale to Whedon’s previous Fray graphic novel from several years ago. I don’t think it was necessary to address it in season eight, and could have been better served to perhaps omit entirely from this season and transplant it to either season 9 outright, or write it as a mini-series between seasons eight and nine. 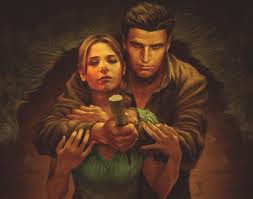 I also feel like it wasn’t necessary to have introduced absolutely EVERY character in Buffylore to this season. The Harmony/vampire celebrity subplot was pointless and served little purpose, while the initial subplot with Dawn’s metamorphoses added nothing to the story; both had a, “hey, wouldn’t it be funny if…?” tone to them. Both were ridiculous. What served even less purpose was the return of The Master, only to be killed within issues of his re-emergence. Why even bother? I especially feel that way when the entire tone of the comic is shifting back to a grounded focus, which the Master could have served a part of. Beyond those, the other strange revelation was Twilight’s identity. Having Angel be the “big bad” of the season made little sense without proper set-up, and made even less sense as the final arc continued on. 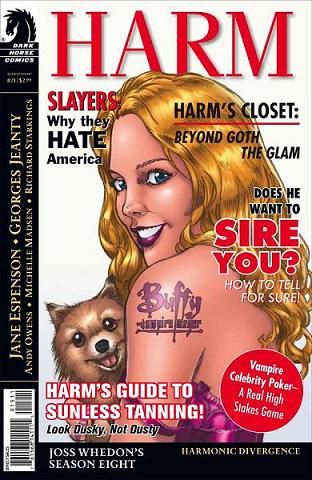 As for what was executed well, Whedon and company continued to write their characters as they had during the television series remaining true to the core of their characterizations. Xander was his usual, supplementary and loyal self as he always was around as Buffy’s closest confidant. Dawn continued to be the troublesome, pain-in-the-butt she was in the series while Willow continued her development as a Wicca. Faith played a continually supplementary yang to Buffy’s yin. Above all, Giles gave his life to stop Angel, doing what he felt needed to be done for the greater good because he knew Buffy couldn’t. His death was very much a shock, but not unexpected at the same time because it’s something we could have very easily seen in the series. As for Buffy, she was Buffy through and through.

Looking back, it’s obvious this could have been told much more concisely. The biggest problems with the series though were its lack of grounding in the realistic aspects that made the series at least somewhat believable. Season Eight didn’t have that, and when you hand even greater superpowers to Buffy almost for no apparent reason, you start to lose the magic of the series and the character as a whole. It’s hard to say Season Eight was disappointing, but at the same time it was underwhelming and underperformed upon first reading. I feel like at least part of this results from literally being able to do anything in a the comic book format, and then throwing all these really cool/funny/awesome/ridiculous and “why the hell not?” ideas into a bucket and pulling out the one’s you feel like doing because you can. That doesn’t make for great storytelling, and Joss has shown in the past that he’s at his best when he has less to work with. 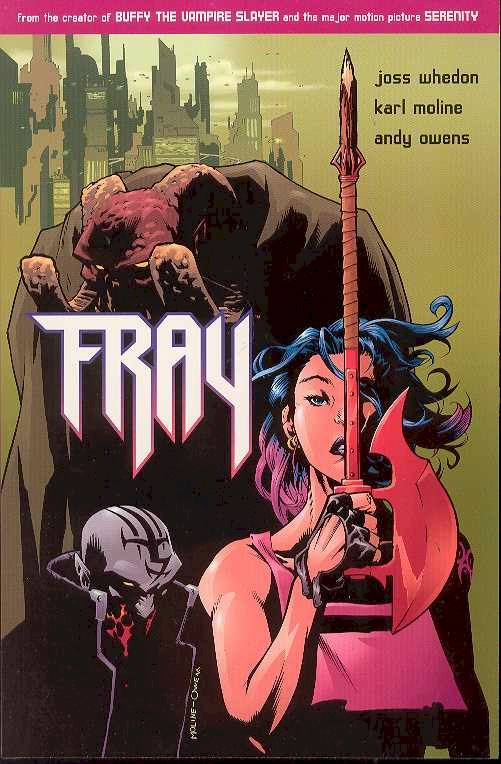 One thing was clear at the end of Season Eight: Season Nine will be much more grounded and in tune with the television series’ vibe. It also happens that Buffy has now cut off the Slayer line and there won’t be another beyond those currently active. If you’re familiar with Fray, you’ll be aware that down the road the Slayers are all but gone from sight in the future, leaving a sole Slayer named Fray to fight off the vampire hordes. Season Eight’s conclusion sets up the future that’s alluded to in the original graphic novel and also during the Fray era story arc in Season Eight. Then there’s also Willow’s role in the story, which combined with her conversation with Buffy at the end of Last Gleaming leads me to believe she’ll be willing to travel down the road of darkness once more and use black magics to replace her severed ties to her former powers. The pieces definitely fit into place for all this to come to fruition.

What will be interesting though is the integration of the Angel characters into the “Buffyverse”. Spike and Angel notwithstanding with their roles in Last Gleaming, I’ll be looking to see how each of them interact with the larger universe now that they’ll be under Dark Horse’s banner by the end of 2011. None of them have ever really shared a book or screen with the primary Buffy characters, so their integration is a question mark to say the least. 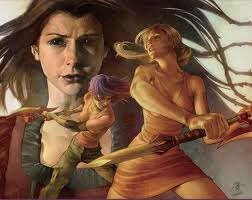 Season Nine as a whole though should be much better than Season Eight. It’s already been promised that the season will be much shorter than Season Eight, hopefully leading to clearer, more directed and purposeful plot development. If Joss and the team can fix the mistakes they made with Season Eight and follow through with a strong story, Season Nine should be everything Season Eight could have been. Ultimately if the credo for this season was the repercussions of change, hopefully it leads to a more direct, focused story in season nine.