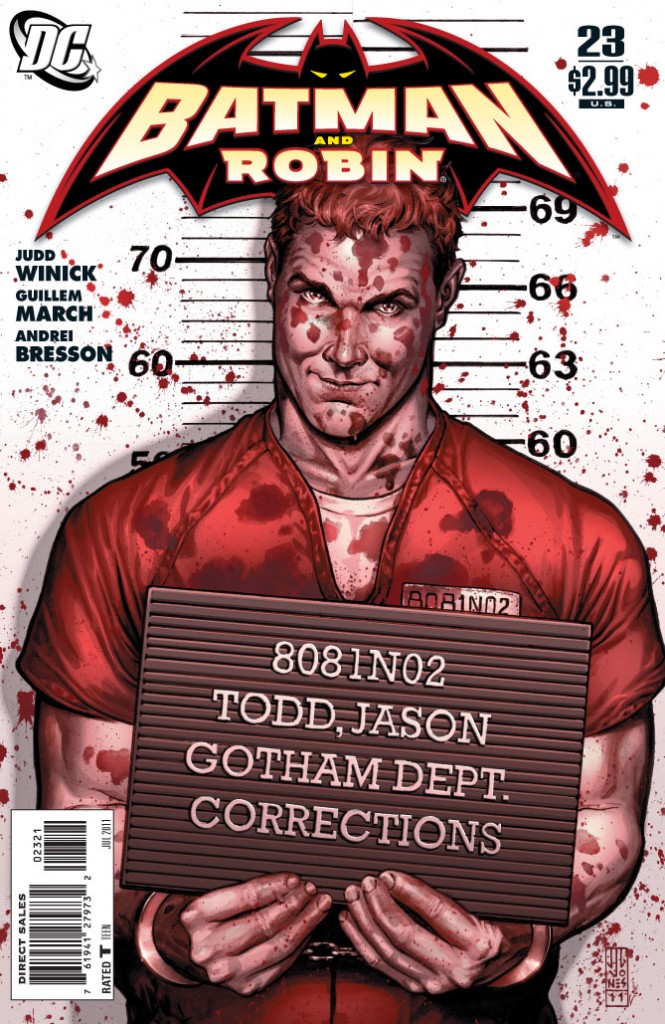 Judd Winick. His name polarizes comic book readers it seems. Gracing everything from Green Lantern to Green Arrow, and up to and including Outsiders and Batman, the writer returns to the Batman universe for a three issue arc on Batman and Robin with a story centred on the character he brought back from the grave. Jason Todd returns in this issue, but just what is up his sleeve is anyone’s guess. Onward ho!

Dick Grayson and Damian Wayne are Gotham’s Batman and Robin. Together they tackle the city’s crime as mentor and pupil, but are they prepared for another onslaught from Jason Todd?

Sitting shackled in his cell in Arkham, Jason Todd is visited by Bruce Wayne draped in his familiar Batman garb. The teacher and former pupil reacquaint dancing about topics such as death and future plans. Jason Todd adamantly argues his point about being moved from Arkham before Bruce leaves and returns to the Bat Cave where he briefs Dick and Damian on his meet. Dick assures Bruce that he and Damian will keep an eye on the former Red Hood, but Bruce worries that by the time they have any sense of what he’s up to it will be too late.

Inside Gotham City Corrections, Jason Todd resumes his onslaught on the criminal underworld from the confines of the prison walls much to the dismay of the inmates who had been wholly intent on gaining retribution for the crimes against their brotherhood Todd is guilty of. After interrogating some hoods, Dick and Damian learn about recent events from inside the prison. They frantically place a call to the Warden demanding to know why they weren’t informed of Jason’s activities. They’re told Jason had been sent back to Arkham. During his transport though, his motorcade is attacked and by a gang who springs him loose.

The artistic duties are split evenly in this issue between March and Bressan, and although I don’t typically like multiple artists in standard serial books, both turned in some good work. There are however minor annoyances. I felt March’s portrayal of Todd was a little overplayed, perhaps being a bit too cartoonishly muscular in the early Arkham scenes with Bruce. Regardless, I felt March put forth some nice work during the Jason-Bruce exchange, characterizing Jason’s personality through varying displays of emotion from purely laid back and humourous, to calm and stern, ending with a panel focusing in on his icy blue eyes and his tone presumably drops to a serious more serious one as he makes clear he’s not one of Bruce’s “freaks”.

Bressan takes over at the half-way point of the issue, and I feel this is the better of the two offerings. Todd’s physique itself is more realistic to what we know, but that’s only minor. I felt the prison yard sequence where Jason sits down to read Pride and Prejudice only to be attacked by an inmate was an excellent touch. The panels follow Jason rising from his cross-legged position sitting against a pole, to the inmate leaping at him, to Jason turning around and grabbing his arm as the inmate lunges at him with a knife in hand; in the final panel on the page he trips him into another inmate. I also enjoyed the following page where Jason is eating his soup with Brutus-esque inmates plotting his death, completed by sprinkled scenes of his own dastardly deeds. Altogether I was quite happy with the art in this issue.

This was my first issue back since Morrison’s departure from the book last year and I must say it was enjoyable. I think much of that enjoyment comes from the re-emergence of Jason Todd as a central antagonist in the book to Dick and Damian. Despite his historical revilement from comic fans of yesteryear, I feel like the character has a magnetism that other Batman rogues don’t. He’s a fallen pupil of Bruce Wayne, one of the chosen. Yet, he has resorted to murder to extend the Bat legacy beyond where Bruce, Dick or any other is willing to go and that’s compelling as a story element. Moreover I find he’s an interesting foil to Dick as Bruce’s two eldest “sons” again are set to go head-to-head. He provides the Dick Grayson interpretation of Batman with a rogue of his own relative to the more traditional Bat-villains, which places him very much akin to the Joker to Dick’s Batman.

With Winick again at the helm of a Todd-driven Batman story, I feel like his handle on the character is on par with no other perhaps save Morrison. This story shifts Todd towards his next big plot to undermine the Batman legacy by imposing his own interpretation of it onto the criminal underworld. It’s difficult to guess what Winick has planned over the next two issues, but I feel like he’s at home on this book with these characters. I was pleased with his prior work, as I am here. This isn’t his Green Arrow work, and I think this story arc deserves a look…so long as you can reconcile with the ridiculousness of the last page.