I’ve developed somewhat of a love-hate relationship with Grant Morrison’s writing. Although I openly admit that both his New X-Men and more recently his runs on the main Batman title as well as Batman and Robin are fantastic, at any other time his writing feels convoluted. As a result, a good portion of his work is often quite hard to follow, and in the case of Final Crisis doesn’t entirely make sense.

Last year, fans of the Dark Knight followed what Morrison described as a definitive Batman story. Spanning two years, Morrison wove plot threads together and sewed the foundation of what would be the final arc of his Batman run, Batman R.I.P. Within it, we delved deeper into the Dark Knight’s rabbit hole and became fully immersed into what drove Bruce Wayne as a man; breaking down his motivations, thought processes and dispositions. We also saw Wayne come against his greatest adversary, one who had planned and plotted the downfall of the Batman, and nearly succeeded. And yet, regardless of whether we refer to the character by any number of monikers, we saw a simple man come to the very edge of his own psychosis, and persevere despite being nearly pushed beyond his breaking point. He never once gave up.

Bruce Wayne met his final fate (at the time) in issue six of the aforementioned Final Crisis. In what can only be considered monumental, Bruce Wayne used a gun and fired a god-killing bullet at Darkseid, catalyzing the god’s downfall. In the process though, Batman was zapped by Darkseid’s Omega Sanction and seemingly killed. It was clear however that despite his “end”, that Wayne’s story was not over, evident in the cave drawings at the end of Final Crisis #7.

The Bat-universe carried on in Wayne’s absence. Dick Grayson is now Batman, assuming the role reluctantly. Damian, Bruce Wayne’s son, has taken the mantle of Robin. Meanwhile Tim Drake, the former Robin, assumed the mantle of Red Robin. The latter held out hope that Wayne was still alive somewhere, alluding to his being lost in time. Throughout the past year, the Bat-books, primarily Morrison’s Batman and Robin run, have built towards the inevitable return of Wayne to the DCU, especially within the last several issues when it is discovered that the body that was buried was not Bruce Wayne’s.

Issue one of The Return of Bruce Wayne opens in a more primitive era where early humans have come across a large of rocket of sorts. This first scene is somewhat confusing since I’m not quite sure how Bruce Wayne found himself to be inside said rocket ship, and how that connects to being zapped by Darkseid’s Omega Sanction. After several pages where early humans investigate the ship and its surroundings, they investigate a nearby cave where their tribe’s elder had been, only to find Bruce Wayne emerging from the cave’s depths, utility belt in hand as a cloud of bats fly out from behind him. 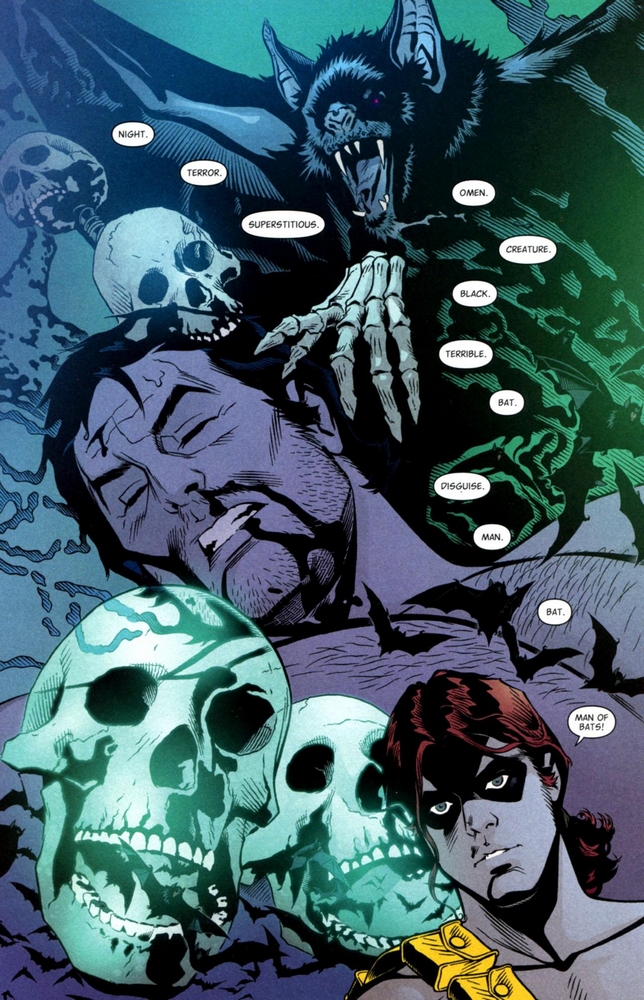 mmediately it’s clear that something isn’t right. The first time Wayne tries to speak, each syllable is slurred unintelligibly. Morrison to his credit even writes out Wayne’s attempts to speak, each word barely pronounceable, much less readable. It’s done well, and really highlights the gravity of the situation. It’s clear that something has happened to him since Final Crisis #6, reduced to a Bruce Wayne/Batman stripped down to his most primal nature; grunting and growling synonymously with how we perceive the early cave men. Yet, when the tribe is attacked by a rival group, Wayne leaps into the fray to protect his company, although quickly beaten and captured. This at least partially mirrors the intention of R.I.P. in that the story arc intended to explore the character as it was stripped down, beaten and bound; yet the hero, the man, and all he represented still shone through.

In an interesting sequence, we see an unconscious Wayne experience visions of bats, while a laundry list of adjectives we relate to the Batman mythology are displayed throughout the page. This alludes to the possibility that Wayne maintains some recollection of his identity contrary to what a party of time travelling heroes state later in the issue. This theory gains weight once Wayne dons a large bat skin as a costume and seeks retribution for his adoptive tribe. Throughout this sequence we see flashes of the hero we know, taking each down as we would come to expect of Batman.

Despite this only being the first issue, it is fair to make several assertions. This continuation of the Morrison-Batman arcs seem to drive home that despite the rigours Wayne endured, there is something innate about who he is. He is naturally protective of his family, and despite his present state where he seemingly cannot recall who he is, he acutely knows what he is and what he stands for. Although Morrison’s work can be criticized for any number of things, I feel his stellar work on Batman really delves into what makes the character tick. For as much as it seems Wayne’s psychology 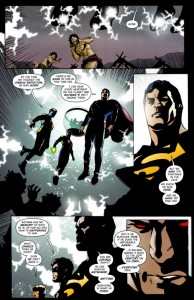 has been altered since Final Crisis, if this first issue of Return is an indication, it’s clear you cannot erase the man, and the core of what makes him a remarkable character.

By and large, the issue flows quite nicely. There isn’t a time when I’m lost, a nice change from my Final Crisis experience. Instead, the events follow a logical progression, allowing the reader to easily keep up with the action without having to scratch their heads or pause for a moment because they’ve missed something throughout the book’s 48 pages. Towards the end we’re offered ominous allusions to where Morrison is going with his story. The previously mentioned group of time travelling heroes state that if Bruce Wayne makes it back to the 21st century on his own, everyone dies.

The issue concludes with Wayne being transported through time to another period, staying true to what Darkseid’s Omega Sanction purports to do. I’m not quite sure what to make of the final page though, but if Bruce Wayne holding a sword while staring down a large sea monster like creature is any indication, then Batman fans are going to be in for quite a ride. Strange rocket ships notwithstanding.