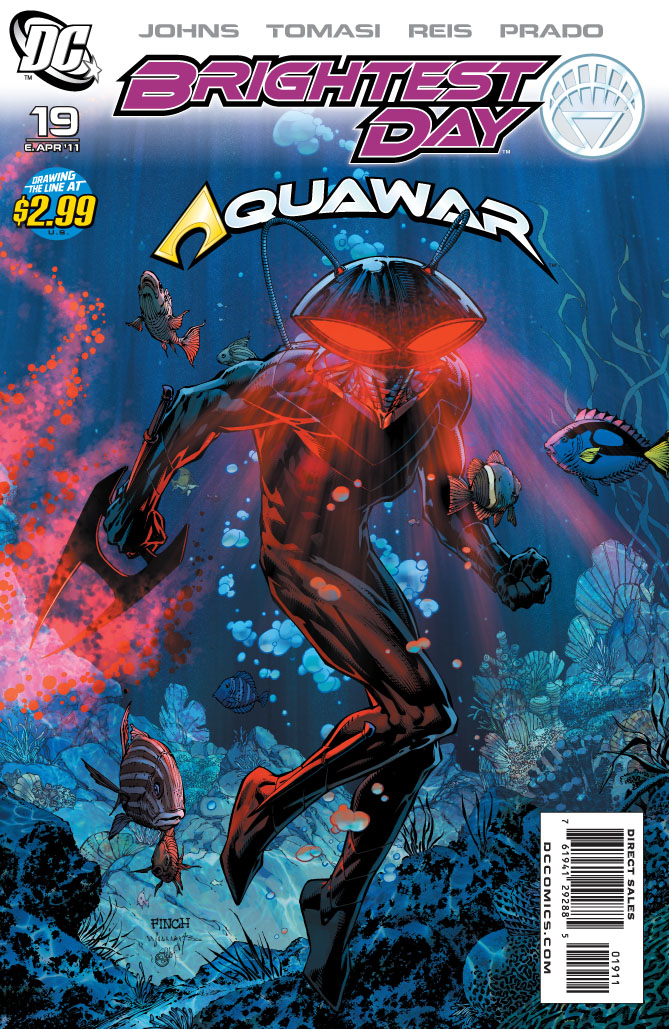 With the series winding down, the last few issues of this series have finally brought the reading quality of the story up to where purchasers of this book expected considering the creative team driving it. We’re now less than a handful of issues away from the story’s conclusion, and with momentum in its corner can this series finish strong despite its slow, lackluster start? Let’s gander this piece of former tree.

In the wake of Blackest Night twelve heroes and villains return from beyond this plane to help herald the arrival of earth’s destined greatest champion. Each is charged with a task to complete, and with each completed task the champion’s arrival inches closer. 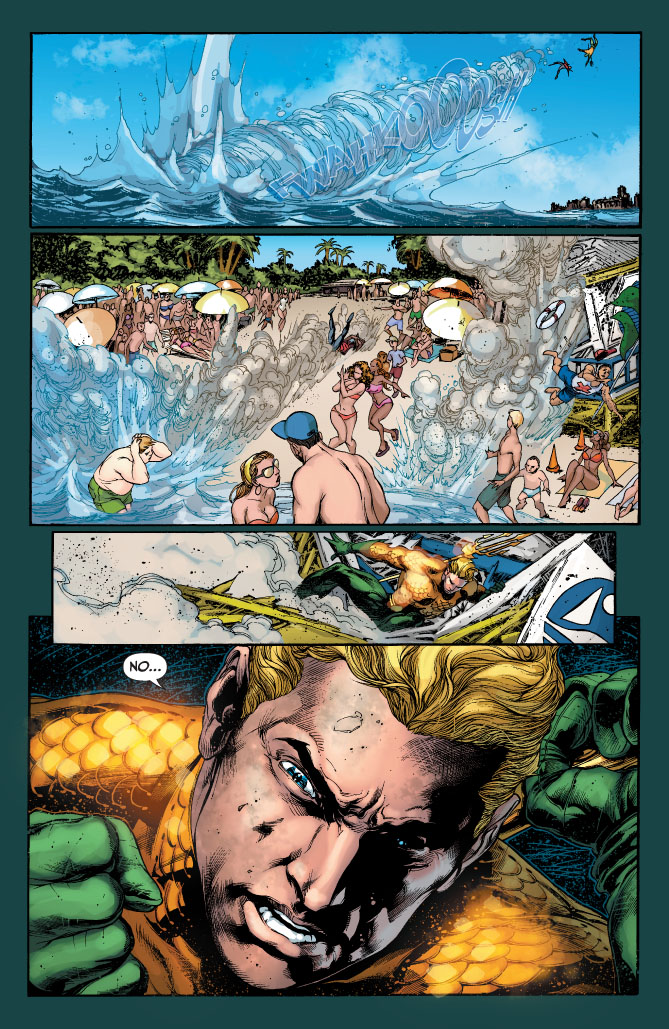 Carter and Shiera Hall are dead. In the aftermath of the last issue, Boston Brand comes to terms with his function as the white entity’s agent; its right hand in heralding the arrival of the champion. The entity explains to him his role and explains why the Hawks had to die, and how ultimately everyone serves a role in the champion’s forthcoming. Brand is its avatar, and not he or the rest of the resurrected individuals have a say in how their fates will play out.

Meanwhile, Aquaman and Jackson swim through the Bermuda triangle and have a heart to heart about recent events in their lives; Mera’s apparent betrayal and confession and the emergence of Jackson’s powers. As they near the shoreline, Siren and her forces attack Aquaman, Jackson and some civilians that had been in the middle of a relaxing day at the beach. A large skirmish breaks out as Arthur and Jackson try to defend the civilians from the Xebelian forces just as Brand arrives on the scene. Siren and Arthur have a spat, distracting him long enough for Black Manta to creep in and slice off Arthur’s right hand cleanly. He falls to the ground as Manta prepares for a final fatal strike, and perhaps Arthur’s final fate. 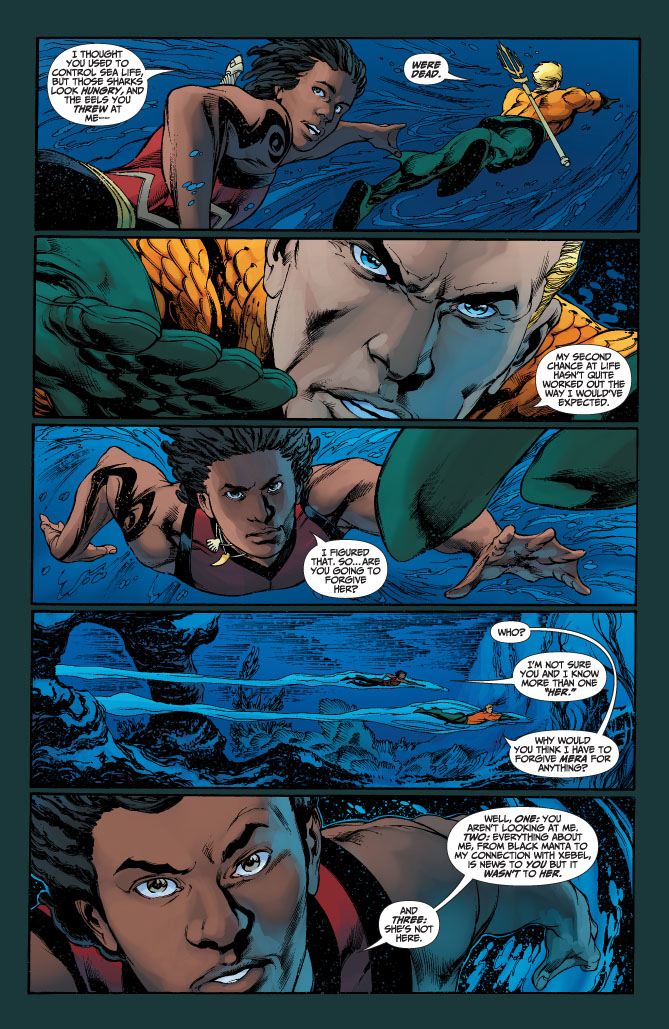 Ivan Reis and Joe Prado helmed the art duties for the entire issue, and as such the issue had consistently great art. There were several highlights throughout the issue, anchored by Reis’ fantastic splash pages. I was particularly impressed with the tail end of the issue where Aquaman loses his hand once more during a squabble with Siren courtesy of Black Manta. I liked how the art in this section of the issue interspersed the Aquawar story with a single panel of Brand arriving to the beach where the fight had broken out between the Xebelian forces, Jackson and Aquaman. Considering the previous issue, the tone of the issue’s opening pages and the loss and apparent end Curry is about to meet, the art serves the purpose of telling the story visually by highlighting the dire sequences of events. It leads the reader to think Curry may die too, and the storytelling is amplified by Reis’ visuals.

All of Reis’ other hallmarks are in place that readers of Green Lantern over the past couple of years will notice. Reis has mastered the ability to create his contrasts between a ring’s light and the darker inks on the pages. They come across quite well in the issue, and altogether welcomed to the series which for all its faults has maintained consistently solid artwork from the get-go (save Gleason’s). 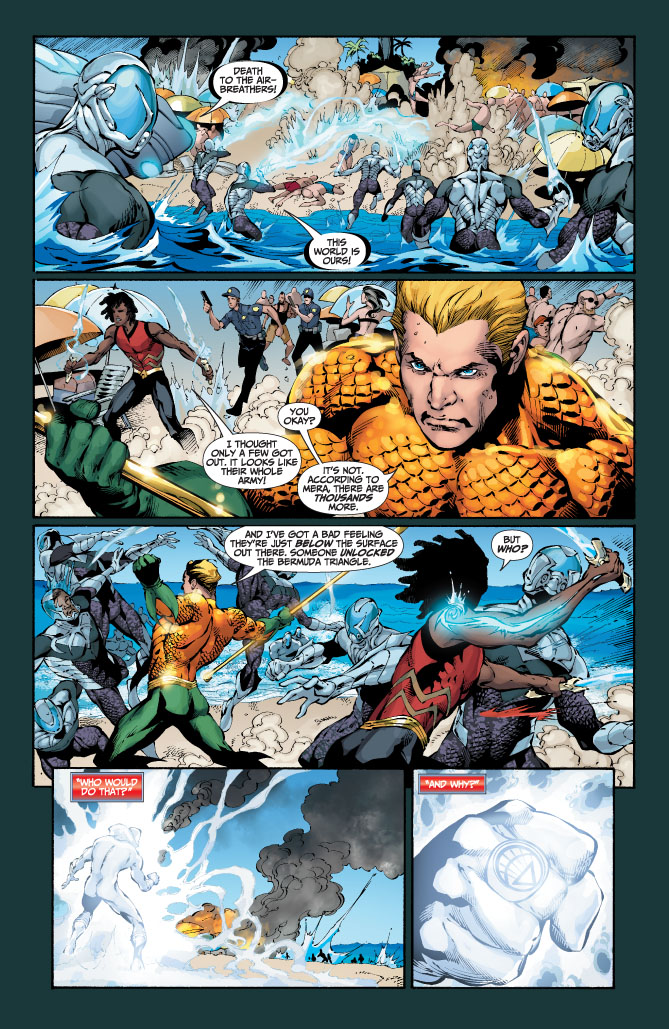 The past three issues of this series have been quite good. One of the criticisms that’s haunted this series since issue one has been that it’s felt that the story has not moved forward; there were several issues early where it felt the storytelling stalled altogether, amplified by the shifting character focuses that have hampered the book’s overall presentation. I was personally frustrated with the lack of movement and had considered dropping the book altogether. Ultimately the series to this point had been saved by sparse issues where the story moved forward, or where critical events were advertised beforehand. Yet, in these last few issues it has felt as though events are finally unfolding and we’re finally seeing a pay-off as readers. The question then is whether it’s too late.

The series has dragged on for some time, and although these last few issues have been good I’m not sure if the series as a whole is salvageable. Understandably context and foundation are required to tell the larger story, but this series should have been much shorter and more focused. Even still, we’re starting to understand more behind the re-emergence of the Black Lanterns, the purpose of Brand, and the function of the white entity. The series is surely primed to finish its last five issues strongly, and I’m actually looking forward to the next issue.

This was alarmingly positive. Don’t worry, I’m shocked too.