I love comic books and if I don’t have comic books themselves to read, I love to read  books about comic books. Consider this review a brief warm-up before I tackle the monstrous 75 Years of DC Comics: The Art Of Modern Mythmaking by Taschen. 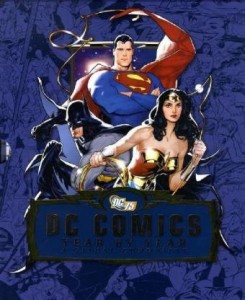 DC Comics Year by Year: A Visual Chronicle by DK books is literally what the title says it is. It’s a large hardcover that comes in a slipcase with great cover work of Superman, Batman and Wonder Woman by Ryan Sook. On the inside, it’s very well organized. Each chapter of the book covers a decade and starts off with a quick summary of what that era was about and how it affected the comic business. It then rolls into a breakdown of the individual year month by month, highlighting a comic issue for its significance (first appearances by a character, an artist, etc). Each issue gets about 300 words detailing its significance. While it doesn’t get too detailed, it manages to do a good job of summarizing what happened in the DC universe every year. All the big events are covered, especially unmemorable events that haven’t been reprinted like the Armageddon or Bloodline crossovers. Year by Year is a great way to garner a working knowledge of the DC universe and its characters. The book does lose some of its momentum as it moves into the 2000’s as it starts to lose stuff to talk about. 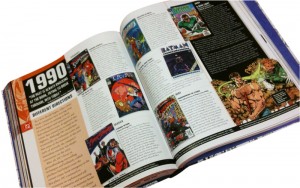 The book is printed on nice glossy paper that showcases the pictures extremely well. The majority of the pictures are smaller scans of covers of various comics, but there are a lot of blown up panels interspersed throughout the book that are very well done.

DC Comics Year by Year: A Visual Chronicle retails for $55 Canadian which for a large hardcover that comes in a slipcase isn’t too bad. It also comes with a glossy print of the cover suitable for framing.  It’s full of interesting information, neat pictures and is a decent substitute for 75 Years of DC Comics: The Art Of Modern Mythmaking which clocks in around 200 bucks!