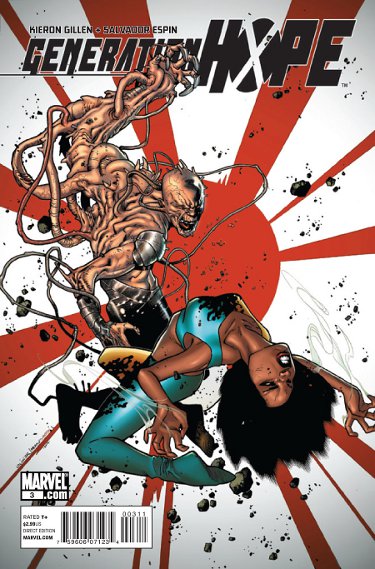 Spinning out of the events of the X-Men’s Second Coming saga and the Five Lights story arc, Generation Hope was launched two months ago and features Hope and the first four new mutants that activated at the end of Second Coming. Let’s have a look at the final part of the opening arc, shall we?

After M-Day, there were scarcely any mutants left. That all changed when a baby was born in an Alaskan town. Her name is Hope. Raised in the future by Cable and now back in present day with the X-Men, Hope now leads her own band of young mutants. Welcome to Generation Hope. 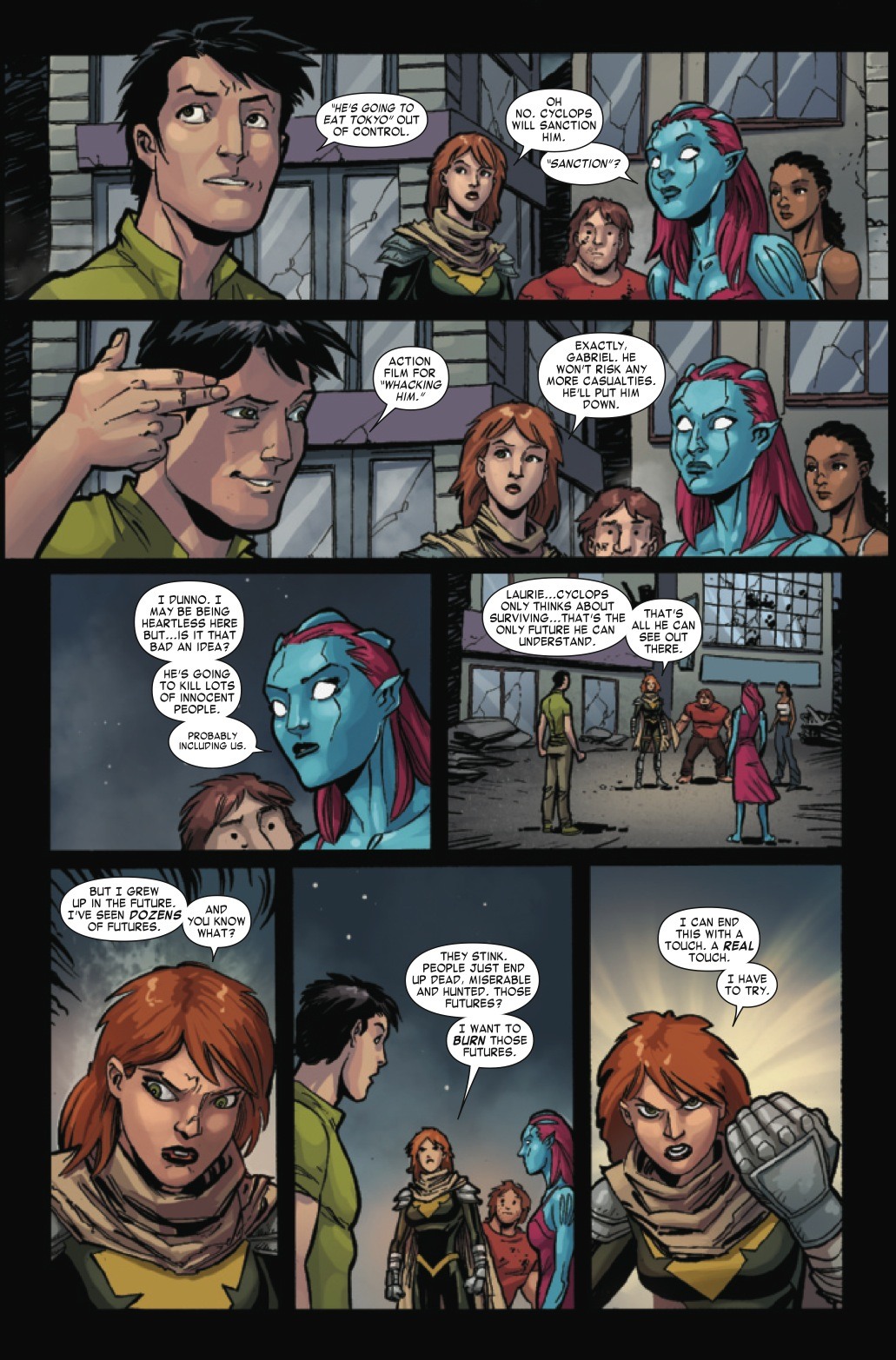 After catching a glimpse of the Phoenix Force, Hope reawakens surrounded by the four other lights amidst a destroyed city block. Things didn’t go smoothly when they confronted Kenji, the fifth light. Now rather large and rampaging around Tokyo, Hope and her band of fledgling X-Men consider their options, while Hope makes it clear Cyclops will “sanction” Kenji to minimize the threat he poses. Hope devises a plan and her team pulls together to get her in close quarters to Kenji and then inside him. Hope projects herself out to Cyclops and asks him to let her be the messiah he believes her to be. She simply asks for backup. Cyclops, Wolverine and Rogue follow suit, allowing Hope the time to get through to him. Hope ultimately does, and gives Cyclops a big “I told you so” before collapsing after expending her powers to stop him. The issue ends with Cyclops kneeling beside an exhausted Hope.

Espin’s art as a whole is not quite of the calibre I’m used to on the X-titles. Espin does offer some good work on the opening page involving the phoenix force, a later page with Hope and the phoenix force in the background, and finally a half-page depiction of Hope towards the end of the issue. I felt like these were the best pages in the book easily, followed by the ones featuring Hope battling Kenji.

Beyond these the artwork is inconsistent, especially concerning how Hope is drawn. She is drawn with varying bone structures from page to page, all of which clash with other panels. Espin needs to decide upon a single method to draw the title character and stick with it. Also, the supporting cast including Wolverine and Cyclops are for the most part bland and uninteresting. Although the battle itself within the script was unnecessary,  the large monster battle between Hope and Kenji was well executed and gives the reader a better idea of Espin’s capabilities as an artist. Here Hope and Kenji’s monsters mingle well on the page, although the other characters on the ground in one page feel very plane. 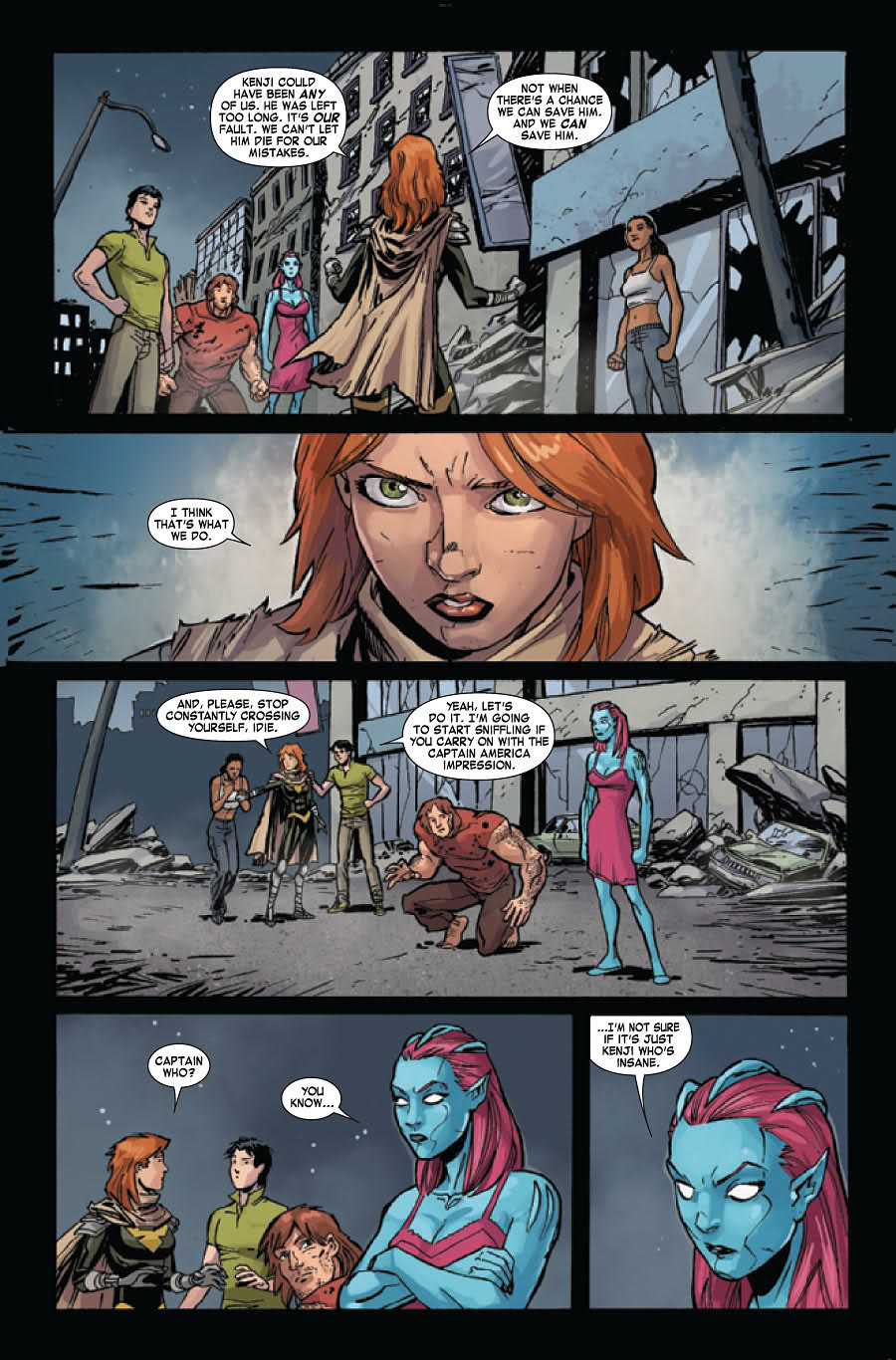 Espin best transitory work is saved for the end of the book while Hope is inside Kenji’s monster. Many of the panels focus on Kenji’s long-winded diatribe while Hope rests on her hands and knees, fighting and hoping to continue on. Amidst his confusion and cries to Hope to help him understand why she’s doing what she does, there are some nice back and forth panels between Kenji and Hope ending finally with a close-up of Hope answering Kenji’s question with four letters. He did a good job here, although I’m not sure the same can be said for the remainder of the issue which seems very straightforward in its design.

If this is to be the flagship title for Hope, it does the job detrimentally to the story. The Five Lights are rather weak supporting characters and overall are uninteresting. None of them really add to the story other than getting Hope from one point to another and functioning as supplemental characters. Considering the importance of these mutants as the first new mutants since M-Day beyond Hope, they fail to really capture my interest. Meanwhile, the longtime X-Men that appear in the book take a back seat to Hope, compromising their own character and appearing as lesser personalities than Hope. Her traits are almost unrealistically amplified in comparison, obviously setting her up for a potential leadership role in the X-Men down the road, possibly in the near future. Cyclops stepping back was hinted in New Mutants last year, and if that’s the case, Hope is the obvious choice.

If the story succeeded at all, it was in establishing Hope as the symbol she’s set up to be in the Marvel universe, specifically pertaining to her importance to mutantkind. Gillen clearly did his research as Hope’s character falls in line with her later depictions in the Cable series, in Second Coming, and also briefly in Legacy. Although I feel Gillen did well in his characterization of her and did stay true to how she’s been written thus far, I unfortunately feel she has been better characterized elsewhere. Gillen handled Hope very well, but the remaining story points including supporting characters did little to complement Hope. They essentially were ends leading to an altogether un-thrilling opening arc for the latest X-title.