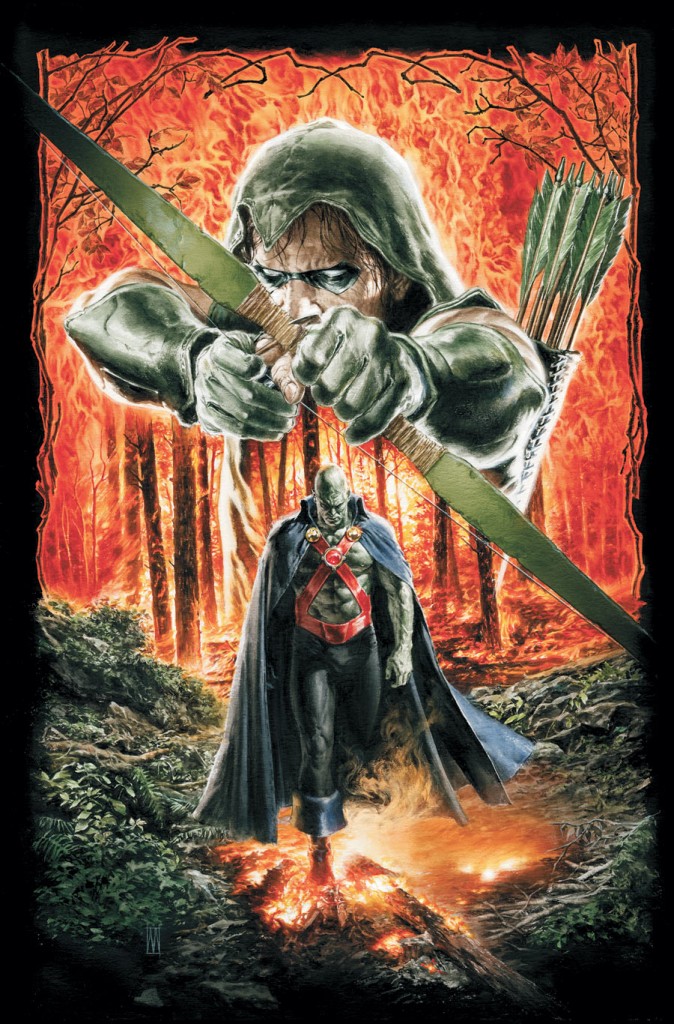 He robs from the rich and he gives to the poor, fires trick arrows and shows them what for. He’s the hero of Sherwood, the man they call… Queeeeeen. For those of you still with me, who decided to brave my horrible intro, let’s take a look at the latest issue of Green Arrow.

One moment can change everything. After Prometheus claimed the life of his grand-daughter and maimed Ollie’s surrogate son, Roy, Oliver was pushed where no hero had ever gone. He killed him. Now with his identity revealed, shunned by his city, and left to fend for himself in a mysterious forest, Ollie must face the darkest parts of himself while trying to defend his city against corruption.

There’s really very little that’s new in the story, but for those of who haven’t been following the main Brightest Day series, I’ll recap it regardless. For those of you who have though, some of this will seem familiar.

Krul quickly runs through Ollie’s experiences inside the forest so far, with Ollie wondering whether the mystical forest is a gift or curse with everything that’s happened. After that single page recap, we join Ollie and Martian Manhunter’s encounter from Brightest Day already in progress. For those not following along, the white entity introduced in Blackest Night fed a vision to Martian Manhunter showing him destroying a forest. Manhunter interpreted this as the forest which sprouted in Star City, especially with its telepathic vacuum.

The forest begins to cause fluctuations in his powers, especially his shapeshifting powers which go haywire. He attacks the tree with the white lantern insignia on it and regains control of his powers. Ollie realizes who it is, but notices that while he’s connected to the tree, everything around him begins to die. It’s a side effect he’s been coping with since his return. Failing to pull him away, Ollie sets off one of his traps; two large tree trunks swing down from the canopy and smush J’onn. His adverse affect on the forest had already taken effect and the forest began to die. J’onn and Ollie run out of the forest, and as they escape, it returns to normal. J’onn

leaves after a short conversation with Ollie. As he does Galahad (yes, that one) arrives for a brief cameo which ends with Ollie running off to perform his civic duty.

We finally rejoin Mary, the fiery young woman Ollie rescued in the forest back in issue one. She’s been absent since. She makes her presence loud and clear in this issue. Her megaphone certainly helps, although the Star City special forces officer didn’t seem to appreciate it very much as she screamed in his face. He smacks the megaphone out of her hand, and violence erupts as the protest turns a little more hostile. The special forces unit opens fire on the crowd, while Ollie does what he can to draw fire away from the rest of the crowd. Mary escapes, and Ollie departs to help disarm the situation, knowing as long he stays in the crowd everyone is in danger. Isabel Rochev, the new head of Queen Industries, had been watching the protest by live feed online. She makes it clear that Mary could be of use.

The scene shifts to the rooftop where Ollie is speaking to his reporter friend. He’s been looking into the police commissioner’s murder the last little while, but hadn’t come up with any leads. They continue to talk until the reporter tells Ollie it’s almost as though someone was doing their part to take out the real trash in the city. Recalling something Mary said, Ollie realizes he’s been a fool and races to Mary’s. Over the next few scenes we see Ollie race across the rooftops interspersed with scenes of a woman changing into a black costume, with masks and wigs arranged on a table; like the one worn by the commissioner’s murderer. Ollie arrives at the apartment to find Mary, who’s tied to the ceiling while the woman in black prepares to kill her on the issue’s final page.

Is there anyone out there who can draw J’onn J’onnz as anything other than a large, cumbersome hulking oaf? If I wanted to see that, I’d go to Marvel. I’ve not been impressed with how he’s been drawn as of late, and his appearance in this book is no exception. And more, why is he wearing pants?

That aside, Neves’ pencils are still solid. The first page is a pretty cool recap montage of the last three issues. The Martian Manhunter sequences were much better than the art in Brightest Day, and when considering these panels are almost identical, it’s a nod toward the quality that was lacking in Brightest Day. There were some nice sequences towards the end of the exchange where Neves transitions between three panels, showing the regrowth of the forest with each successive panel.

I liked the riot scenes. Neves drew a nice top-view wide-shot of the crowd, with Ollie watching from above preparing to fire a trick arrow. Here Neves does one of his frequent unconventional transition shots as we follow the page from the left, to a smaller rectangular panel of the arrow whistling through the air, and then making contact with the officer in the panel beneath it. It’s a departure from the largely by the numbers panel arrangement of most other books.

Overall the art hasn’t been a let down yet. It’s not as good as the first issue’s which was amazing, but it’s still very solid artwork by Neves. Arreola’s colours make it that much better.

Generally the issue was a letdown, but that’s because the first half of the book was essentially a recap of the Martian Manhunter part of the story that was told in Brightest Day. If they were going to do that, I think Krul probably could have contained it to fewer pages and elaborate on the remainder of the story. I think there’s more that could have been done during the riot sequences, and perhaps the Rochev scene too which was relegated to a page. Rehashing the Brightest Day story created a disjointed reading experience for me, although it’s unlikely to be the same for someone who hadn’t read that book. It’s really a toss-up in that regard. The second half of the issue was better, with a bit of a red herring regarding Mary, Ollie’s friend whom he’d rescued back in issue one. She was the obvious culprit after Ollie’s revelation, but the final page twists us in another direction with Mary actually held captive.

The book continues the mysteries that have made this book interesting so far. We’re still left to wonder who killed Nudocerda. We’re left to wonder what exactly Rochev has planned, what her connection is to the Queen family, or if there even is one beyond knowing Oliver’s father. The direction of the book builds on the social commentary established in the first issue of a ravaged city struggling to get back on its feet without help of the authorities. It’s a little over the top in how Krul has created a police state though. This theme has been lacking from the Green Arrow comics in recent years regardless, so the sentiment is welcomed regardless of its outlandish presentation.

This continues to be a solid book, with very good art to complement a story that keeps bringing me back for more.