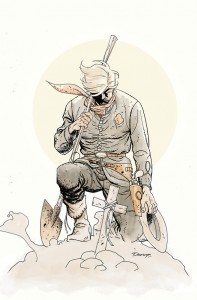 I’ll start this review with a confession. Outside of one issue of Jonah Hex (issue #35 drawn by the amazing J.H. William the 3rd) I don’t really read his comics. This isn’t to say that they’re bad comics by any stretch, In fact from popular opinion they’re quite good, we constantly sell out of Jonah Hex comics at our store and those that are into it are into it. I guess it’s just a comic that I never really got into; Palmiotti and Gray are doing great stuff, and I am a HUGE fan of Jordi Bernet’s work – but for the most part Western comics just seem to miss the mark for me, they try too hard to emulate Sergio Leone’s pacing which – if not done right – can make for a fairly boring comic read.

So I usually only grab the comic when it’s someone special doing the art, first it was Williams, and now it’s Darwyn Cooke (this will be his second time doing the character.) So before I gab on and on about the art – this is THE Darwyn Cooke after all – I guess I’ll talk about the story.

Palmiotti and Gray have packed this with a wonderful plot – After Tallulah Black leaves Jonah Hex, he’s approached by a proxy of an oil man to kill/bring in 50 men. What follows is the best use of  montage I’ve ever seen in comics. Cooke’s art sings here, giving us a beautifully laid out scene wherein we witness Hex doing what he does best, it’s got moments of violence and humour that really makes this comic sing. Cooke takes Palmiotti and Gray’s script and with the help of colourist Dave Stewart shows the twisted world in which both Hex and Tallulah live. The color palette gets darker and darker as the story progresses – which suits the story’s slow descent into tragedy. (Seriously, compare the opening double page splash compared to the final chilling appearance of Hex (with a winking little joke too.. that’d be some great original art to buy.) Dave Stewart has long been one of the greatest colorists in comics and he really shows it here. (After the fact I found out that you can check out Darwyn’s wonderful blog for a discussion on colouring for this story.)

While I could obviously talk at length about Cooke’s art, I’d really suggest you pick up this issue, not only is it a beautiful read – but it’s also a really decent script. This is going to be one of those issues that people will talk about when great Jonah Hex stories are discussed.  While, I’m still not 100% sold on picking up a monthly Jonah Hex title.. I will definitely give #51 a shot.

For Fun check out The Source Blog’s chat with series writer Justin Gray (Palmiotti gets his turn later today) on all things Hex #50.