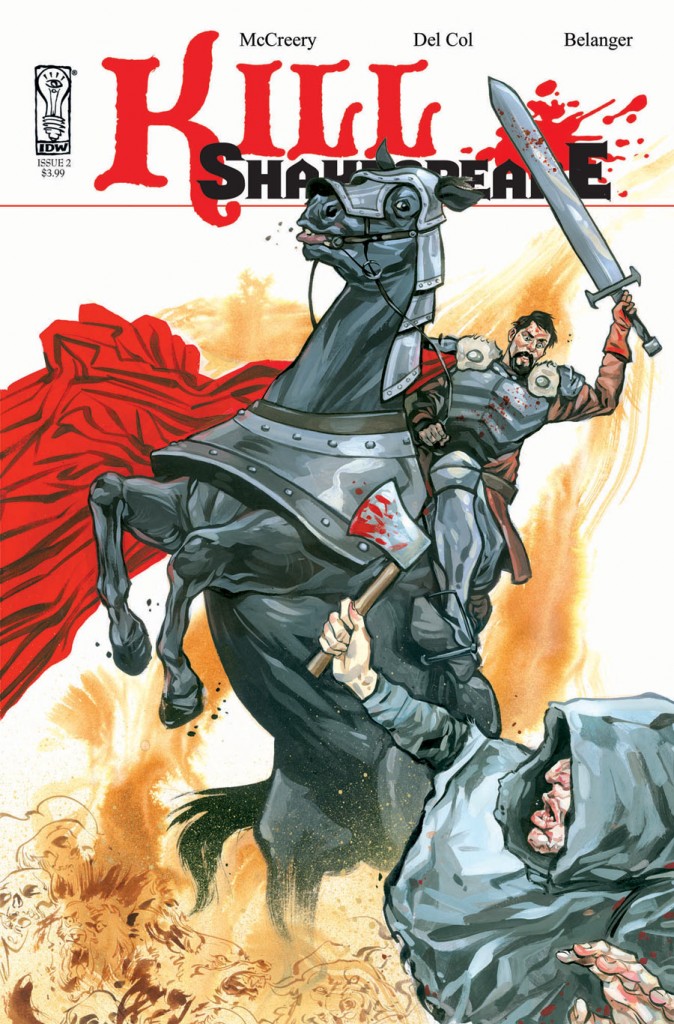 I took one look at the title of this book and was overwhelmed with head scratching intrigue. Kill Shakespeare? Unless you heavily follow comic books from the smaller companies like Dark Horse and IDW Publishing, the first issue of IDW’s Kill Shakespeare probably slipped under your radar when it dropped last month. The series is co-written by Conor McCreery and Anthony Del Col with art by Andy Belanger (of the webcomics Bottle of Awesome and Raising Hell). It’s billed as an epic adventure that will change the way we look at Shakespeare. The series looks to pit the greatest heroes of Shakespearean lore such as Hamlet, Juliet, Othello and Romeo against the vilest villains in Shakespeares’ plays. At the centre of all of this mess, is a reclusive wizard named William Shakespeare.

In the first issue, the book begins by reimagining the events which led to the rise of Claudius to kingship, including the death of King Hamlet, the murder of Polonius at the hands of the king’s son, Hamlet, and his subsequent banishment from the kingdom. This sequence follows the events in the play fairly closely. The story takes a dramatic turn when Hamlet and his friends Rosencrantz and Guildenstern are attacked at sea by pirates. After some swashbuckling fisticuffs, Hamlet finds himself in the company of Richard III, who begs him to help in his quest to silence discord and rebellion within his kingdom. Discord and rebellion incited by the tyrannical zealotry of one William Shakespeare.

Yes, you read that correctly. His greatest weapon? A quill.

After making a promise to Hamlet, Richard III convinces Hamlet to help him kill Shakespeare. Issue one ends with it fairly clear King Richard is up to no good. 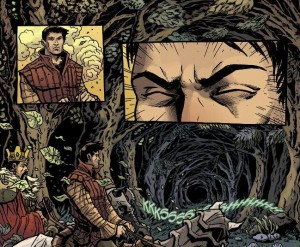 The second issue picks up with Richard planning his takedown of Shakespeare, and along with Hamlet, Richard’s forces seek out the Wizard’s hidden lair. Along the way, the story twists as Richards’s true harsh demeanour reveals its face. In a twist, Richard’s forces lose Hamlet when they’re attacked in the forest, leading to some rather gruesome visuals once this news reaches the king. At the end of the issue, the story takes a classic Shakespearean twist as a character reveals an ulterior motive, throwing into question where allegiances lay, and who is working for whom.

This is an interesting take on the Shakespearean characters we know from the classic plays. McCreery has taken Shakespearean characters such as the Macbeths, Hamlet, and Richard III and created an entire universe for them. This universe appears to function similarly to Marvel’s universe or the DCU, in that the characters co-exist together in an organic environment, building relationships and alliances with each other as they become necessary.

I feel though that unless the reader has a working knowledge of Shakespearean literature that some of the names or references will be lost. Even more, I also feel the reader will be hard pressed to grasp the motivations of the characters unless they have at least skimmed Shakespeare beforehand, although I’m not sure that high school readings will suffice unless the reader is passionate about the subject matter.

The book is enjoyable so far, although my lack of Shakespearean knowledge does hurt the experience. I felt like I was missing some allusions or references that anyone with a firm grasp on the subject would catch immediately. For anyone who is familiar though, Kill Shakespeare creates an intricate realm of fantasy that should provide some geek out moments for even the most reserved Shakespeare connoisseur