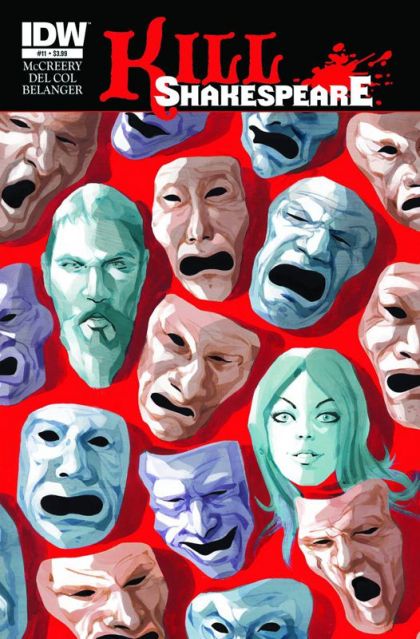 Kill Shakespeare has been a hugely successful book over the last year. With the penultimate issue, the battle for Shakespeare’s life and the world of the Bard is coming to a head in the final battle. Lines are drawn and alliances are solidified as the series moves closer towards its conclusion. Onward!

What happens when Shakespeare’s greatest creations come together ? An epic war between good and evil, that’s what. Kill Shakespeare features the Bard’s greatest heroes and villains as they attempt to either kill or save their creator, William Shakespeare.

Amid the raging fires on the battlefield, bodies from King Richard and the Prodigals’ forces lay scattered about the landscape. Still mourning the passing of his friend, Hamlet returns to Juliet and pledges to bring Shakespeare back to them. He ventures back into globe forest and returns to Shakespeare’s cabin. There he finds the old drunk bloodied on the floor after having fought off the enchanted dagger once more. Upon learning of Falstaff’s fate, a saddened Shakespeare hardly reacts once Hamlet takes the quill from its box. He implores Shakespeare to come and join him and despite his belief there is no one left who believes in him, the prodigals still do and gladly fight in his name.

On the battlefield Richard and Lady Macbeth argue over whether to attack Shakespeare’s home. As the Lady prepares to depart, Richard slays one of the three sisters and leaves her for dead on the battlefield. Back among the Prodigals’ ranks Hamlet leads Shakespeare to their gaze. Despite his being their creator, he delivers a humbled speech asking not for their forgiveness for his desertion, but only that he may join them in battle against Richard’s forces. Afterward Hamlet pulls Romeo aside and intentionally asks him to always protect and ride alongside a woman not a few yards from them; Romeo and Juliet embrace as Hamlet looks on from a safe distance with sorrowful confidence. Meanwhile Shakespeare concocts some of his own reinforcements much to Othello’s amazement.

The Prodigals quickly charge forward in the name of Will. The forces of Richard and Lady Macbeth respond in kind with krak-kooming fireballs, but they are turned away by a protective shield created by Shakespeare. Off in the distance, Richard endeavours to push forward and confront Shakespeare on his own, while Lady Macbeth attacks a group of Prodigals with her sorcery. Romeo is thrown from his horse, while Juliet is confronted by the Lady while checking on her long-lost love. Richard sneaks up on Shakespeare also and kicks him to the ground from his perch atop a cliff. Hamlet leaps into action to protect Will, but is blindsided by Iago who proclaims death is on the “Shadow King’s” door.

There’s very little left that can be said about Belanger’s artwork. Throughout the series he has presented some fantastic work and this issue is no exception. With fire about the battlefield chaos reigns as Belanger brings the frantic nature of war and conflict to life with scattered panels at the top of the page ending with three straightforward panels at the bottom of the first page leading to another great page. On the second and third pages Belanger masterfully puts a fantastic page together. It begins at the top left corner of the page with a smaller panel with Hamlet trudging through the woods, followed by him running toward Shakespeare’s cabin. As he steps inside he peers into the darkness and sees his creator. What’s awesome about this page is how at the bottom of the second page we find Shakespeare’s feet. We’re then able to follow them up towards his head. Scattered about the larger focal point of Shakespeare are smaller panels of the broken dagger and Hamlet finding and picking up the quill.

Considering the history between Romeo and Juliet, and the blooming romance between Juliet and Hamlet, I loved the scenes where Hamlet asks Romeo to watch and guard Juliet with his life and never let her out of his sight. The following page is broken down into four horizontal panels incrementally chronicling the star-crossed lovers reunion. It’s a very somber scene as Romeo and Juliet embrace in the not-too distant shadows, while Hamlet somberly and sadly watches on believing himself to have done right by them. Still, the sadness in his eyes communicates both the tenderness in his heart for Juliet while it additionally highlights how the character has developed in his characterization as a selfless hero.

The entire issue is spectacular from start to finish. The art is continually fun, gruesome, dynamic and altogether remarkably enjoyable to look at.

Moving ever closer to the series’ conclusion, issue 11 delivered a tremendously action packed, epic experience while providing readers with an equal sense of satisfaction and dread as the writers march us towards the final issue. Del Col and McCreery elaborated on their story in this issue by revealing what led Shakespeare towards his reclusiveness. In doing so we become more sympathetic to the creator’s plight as he grapples with the decisions some of his creations have made. It very much comments on our perception of creation in how we focus almost exclusively on the negative aspects of our own creations and more regarding ourselves. We ultimately fail to see the good in what we do, instinctively drowning it with the negative.

Shakespeare is disheartened by how some of the characters have used their gift of free will and correspondingly feels responsible for the actions of characters like Lady Macbeth and Richard III. Here we see Hamlet’s inspirational heroism shining through as he rallied the “god” of this world towards action despite himself. We see a similar act of heroism, albeit smaller in scope, when he pushes Romeo and Juliet together much to the sorrow of his own heart. Here we see Hamlet in full bloom as the hero he is destined to be; inspiring, selfless, and altogether tragic in his pursuit for redemption.

The issue was enveloped with tense, atmospheric awe; it felt very much like the climax of a movie’s final battle scene where the protagonists band together for their final stand. Recalling the tenseness before the Battle of Helms Deep from Lord of the Rings is comparable and Del Col and McCreery capture that atmosphere perfectly. Much like earlier issues of the series, issue 11 delivered on the series’ strong points, while also rewarding readers with the evolution of characters like Hamlet or Shakespeare who have pulled themselves beyond who they were and become what they could be all along. I feel there is a clear parallel between them, making their character arcs the most important and intriguing of the series. Altogether however, this was one of the best books I’ve read in the last year both concerning the issue as a stand alone and its ability to thrill, entertain, and deliver quality storytelling in the series’ greater context. The story chronicles humankind’s realization of its own character and capabilities standing outside of itself and moving beyond our plights towards our personally scribed destines. The series has been tremendously well done up to this issue and barring an unfathomable gaffe in the final installment I would dare call it a comic book masterpiece.