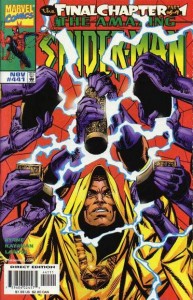 Someone pointed out that I have not featured a Modern Era comic since my exquisite New Mutants #2 pick in Undervalued Spotlight #79 back in the middle of March (beware the ides of March).

Oddly enough I was just going through a run of Amazing Spider-Man’s I’d just purchased and made a mental note to price issue #441 a bit more aggressively than I did the last issue I put out (which sold within 2 days).

You see Amazing Spider-Man #441 is the last issue in the series. The next Amazing Spider-Man was #1 and part of an ongoing attempt at Marvel to re-launch its major titles to much more accessible #1s. Sure Marvel cheated and went back to the old numbering system, first having new and old numbering beginning with #30/471 and abandoning the new numbering altogether with issue #500 (how convenient).

Still to many a Spider-Man purist issue #441 marks the end of an era, the end to what had become and still most likely is the most collected superhero comic book title.

The great thing about Amazing Spider-Man as a title was its ability to create new and lasting characters, to introduce new directions and events that would always be remembered. The run is dotted with special issues so frequently that collectors from every era have many individual issues to covet. It seems you can go decades in some other major titles before something of note happens but with ASM you go from landmark to landmark. Have a peruse at the ASM title in the Overstreet Price Guide to see what I’m talking about.

The important thing to note is that these later low print runs don’t belong in the original 441 issue Amazing Spider-Man run. You’ll find most of the Spidey’s in the low 400s get good market prices relative to issue in the mid 300 or late 400s.

True collectors of the Amazing Spider-Man run can find excuses to avoid issues like Volume 2 #5 etc but they cannot ignore issue #441. Add to all this that #441 marks the end and as I’ve stated before final issues are a collecting strain unto themselves.

Amazing Spider-Man #441 is an important issue every Spider-Man fan and every key comic book fan should own and its one you can acquire cheap!

The 40th edition of the Overstreet Price Guide shows $4 at the 9.2 grade