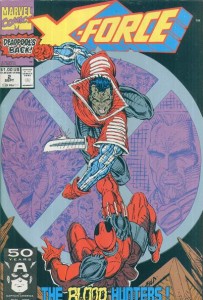 I’ll follow up last week’s modern with one more. Next week I’m diving right back into the old stuff!

I wish I sold some of my comics in March 2010. That was one crazy month. March 2010 saw a CGC 8.5 copy of Action Comics #1 sell for $1.5 million and perhaps even more shocking a CGC graded 9.9 copy of New Mutants #98 fetch $12,250.00. Unfortunately for the New Mutants buyer two new 9.9’s have appeared on the census thus seriously damaging his chances of turning an eventual profit.

Funny thing about that sale was the stampede it set off. There was a literal race to the Fed Ex office. People were running with their nice shiny New Mutants 98s, sending them down to CGC in Sarasota, FL. all were hoping to get a 10.0. There are now a staggering 603 copies graded at 9.8 and 656 copies graded at 9.6. The majority of these being graded post March 2010. CGC 9.8 copies trade for over $200 while CGC 9.6 copies go for about $100.

Man am I ever digressing!

Actually I’m giving you background to help my case for this book. New Mutants #98 was of course the 1st appearance of that Merc with a mouth Deadpool.

X-Force #2 features the second appearance of Deadpool. We can see the damage Deadpools 1st appearance does above. Those are solid prices for a 1990s book and they reflect the fact that Deadpool is a very popular character with a large fan base.

So what’s up with X-Force #2? The Overstreet Price Guide gives it a value of only $3. You can’t buy a new Scooby Doo comic for your kid for a measly $3 bucks. Beautiful, almost flawless CGC 9.6 copies of X-Force #2 are getting $12 at auction.

It’s odd that the 1st appearance has such demand while the 2nd appearance gets no interest at all. Perhaps most people don’t know that X-Force #2 is Deadpool’s second appearance. This fact is not noted in the Overstreet Guide. The point is noted on the CGC holders for the book.

The comic itself features a solid Liefeld cover that prominently features Deadpool and this book really is a must for Deadpool fans and for modern era comic collectors as well I would imagine. Oooooohhh! I get it! It’s a Rob Liefeld book! Still, people’s view of an artist can’t take away from the fact that it is a prominent characters 2nd appearance.

Action Comics #2, Detective Comics #28, Amazing Spider-Man #1, Giant Size X-Men #1 are all 2nd appearances of major characters and look at what they are worth.

I will try to get Overstreet to denote the books significance, coupled with this article the books value should shoot up to at least $5.

The 40th edition of the Overstreet Price Guide shows $3.00 as the price for a copy graded at 9.2.