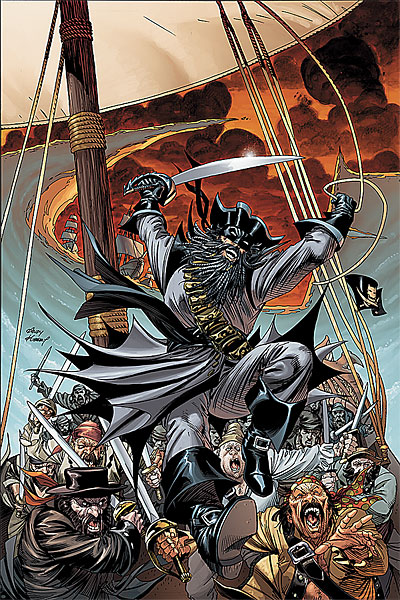 Shiver me timbers, we’re half-way there! Grant Morrison and company returned this past week with the third part of their epic tale chronicling Bruce Wayne’s return to the DCU. This week we’re taken across the seven seas as Bruce Wayne swashbuckles his way through the timestream.

In the latest issue, Bruce Wayne finds himself in the mid 1700s as he makes his way through another time period. Continuing the theme, Wayne is jettisoned to another period during an eclipse following his time during Gotham County’s settlement period. As the story progresses we learn more about the history of the Batman persona, as well how Bruce Wayne’s friends are preparing to stop his return him and also the evidence they’ve gathered surrounding his “death”. Following a number of discoveries about Wayne’s history and the Bat-People tribe, we get a visit from an old character from the DCUs Wild West as Wayne embarks on the next leg of his journey. 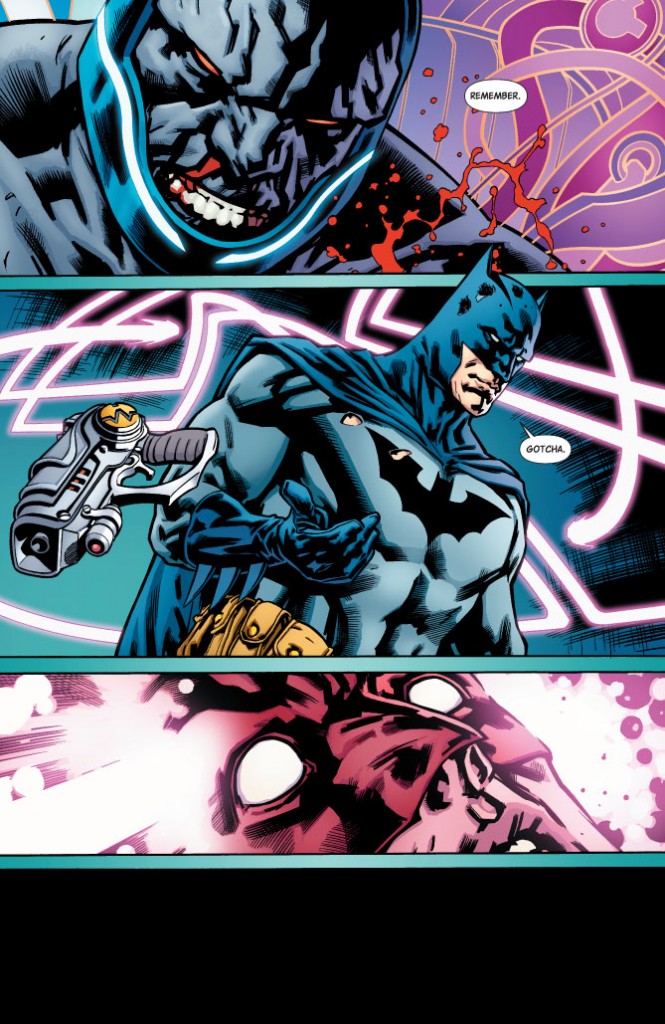 The third issue of The Return of Bruce Wayne promptly begins with a flashback. Wayne recalls his final moments during Final Crisis where he faced off with Darkseid, shot and wounded him, and was then struck by an Omega Sanction blast. Following the flashback, we find Wayne crawling ashore from a body of water for the second time in this series. In doing so though, he finds himself at the feet of Blackbeard and his swashbuckling minions. Accused of being the infamous Black Pirate, Blackbeard questions Wayne on the location of the rumoured treasure located somewhere in Gotham County’s catacombs, the caves we’ve previously explored in the first two issues. Eventually Wayne agrees to take Blackbeard and his men into the caves in search of the treasure they seek after a youth named Jack is threatened by Blackbeard. As they navigate the catacomb, Morrison offers more backstory on the Bat-People who inhabited the caves, including the traps they set to protect the treasure held deep within it.

Morrison then brings us back to the present, where the Justice League sans our time travelling heroes who were marooned by Bruce at he end of time in the previous issue. Between the two pages dedicated to the conversation, the League discusses how to deal with the threat of Bruce coming back to the present, which we’re lead to believe will somehow destroy the world; this is connected to Darkseid blasting Bruce with the Omega Sanction in Final Crisis. Spiraling out of the Red Robin series, Red Robin presents his findings to the League where it’s revealed that the Bat-boys found traces of Bruce’s exploits throughout time in the form of Bat symbols on the inside of cave walls, various paintings, and also symbols carried across the Siberian land bridge and carried into Europe by cavemen. These clues led to the discovery of an ancient relic dated at 11,000 years old; the suit that Bruce Wayne wore in Final Crisis. The current Batman and Robin meanwhile explore the grounds where Wayne was last seen, stumbling upon the very machine which held Wayne captive in Final Crisis.

We’re returned to Wayne and Blackbeard’s men as they continue through the caves, where after coming upon a variety of traps, Wayne dons the cape and cowl of the Black Pirate, leading to some classic Batman hijinks; butt kicking antics and pants crapping peek-a-boos become the order of the day. After Blackbeard cries uncle, Wayne and the youth continue through the cave, finally arriving at the cave’s treasures; the very costume Bruce Wayne wore in Final Crisis, preserved in its entirety from cape to cowl, from boots to utility belt. Keenly inspecting the remnants of the suit, he realizes he wore it as he struggles to remember his past. Meanwhile the cave’s inhabitants, the last of the bat people, bow in reverence around him.

After a final conversation with Jack before Wayne vanishes, we’re brought to the next time period Wayne will navigate, the Wild West. After seemingly making a Zorro-esque reputation for himself, Wayne finds himself in the familiar role of the vigilante, drawing the ire of local criminals. We finally end the issue with two hoods seeking out a bounty hunter to put an end to Wayne’s meddling, who we find out is Jonah Hex. 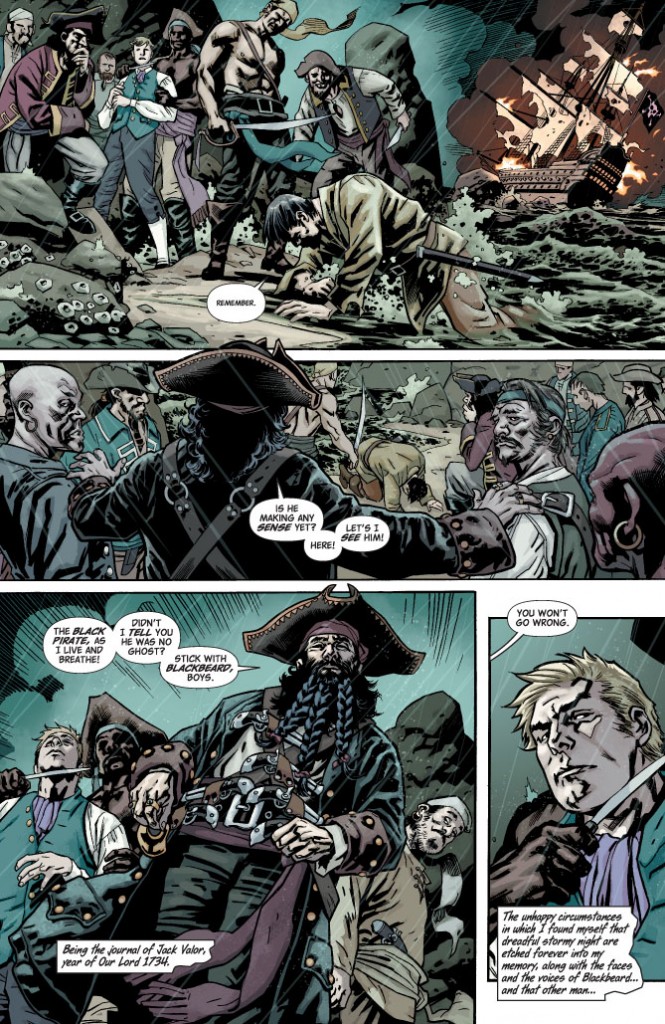 Much of the art uses darker tones, set against rainy weather or later the darkness of the catacombs. It somewhat captures the darker atmosphere of Batman’s surroundings synonymous with his stories set in Gotham’s modern landscape. In that respect I think the artists did quite well in capturing the moody, darker tones and atmosphere of a Batman comic. They’ve always been more rooted in darker environments, and that sense is mirrored here. The art in this book though is at its best the more detailed the shots are. In the more general panels where larger pieces of action occur, the characters feel very bland, less detailed, and almost lazily drawn. In contrast, there are several panels in the book where an amazing amount of work was put into the finer points of the character’s features. In the opening page for example, we’re given three panels as a flashback sequence depicting Bruce Wayne’s final stand against Darkseid. There we can see Darkseid’s detailed reaction as Wayne shoots him. We see Wayne calmly shooting Darkseid; emotionless as he drops the gun and says “gotcha”, and finally Wayne as he’s hit by the Omega Sanction beam. Another great example is how the Jonah Hex close-up is drawn in the final pages. It was drawn in such a way that his face was well defined, yet angled so that his unscarred face was displayed, while we can only see glimpses of his scarring. He’s grittily drawn as typical western character, accentuating the musculature of his face giving the character definition. The darker tones otherwise compensate the art in non-close up panels, art which doesn’t look as good, but is saved by the overall styling and presentation of the scene as a whole.

There were a lot of good things this issue did to set-up the second half of this mini-series. First and foremost, this issue elaborates on the premise that Morrison glossed over in Batman #700. A key part of the mythology that he’s tried to establish throughout his entire run on the various Batman titles is that Batman is more than Bruce Wayne. As an ideal, Batman transcends the person who happens to be wearing the cowl at any given time. As we saw in Battle for the Cowl last year, Dick Grayson assumed the mantle in order to preserve what Bruce Wayne stood for. It’s those ideals that define what it means to be called or known as Batman. In issue 700, the final pages sum this up 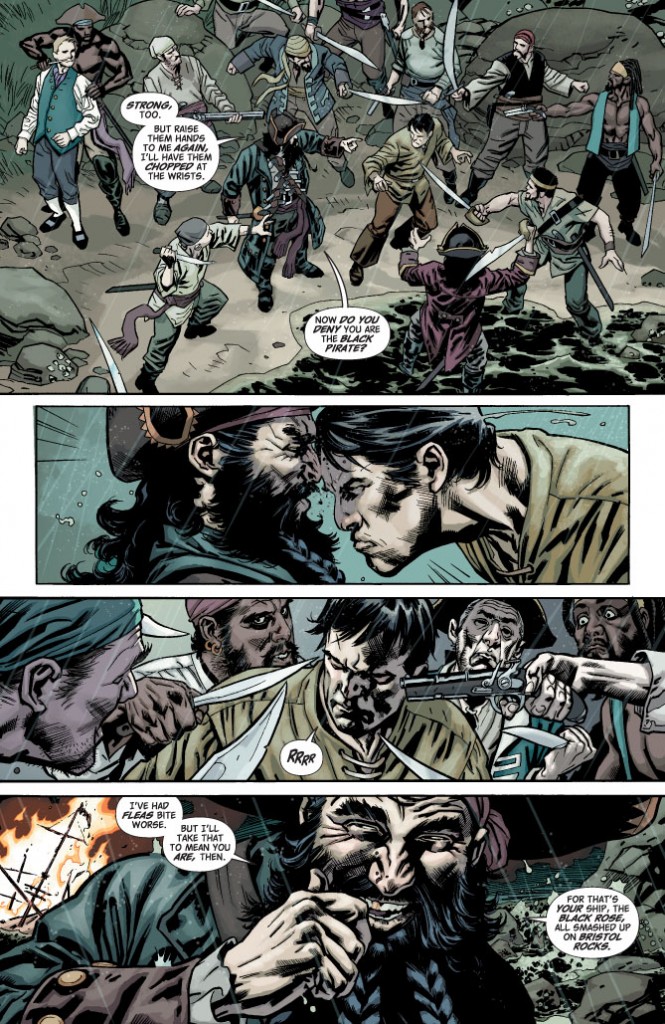 quite nicely as we’re shown Batman throughout various time periods past, present and future: “No matter when, no matter where, no matter how dark.” The issue ends with the bat signal shining, and Batman and Robin leaping into the fray. And that’s really the whole point, in some form, Batman and to a lesser extent Robin are symbolically immortal.

What The Return of Bruce Wayne #3 accomplishes is it establishes that notion of a shadowy guardian or protector as far back as issue one. In that issue, Wayne leaps into action with his makeshift bat costume to protect the people of the bat-tribe. Issue three establishes that historical context of guardianship as a role passed along with a set of ideals that endures synonymously with the struggle we know to be inherent with Batman and the character’s opposition. Wayne even says, “whatever happens, never give up the fight,” at the issue’s end. The pieces are in place for Morrison to establish the Batman mythology beyond Bruce Wayne.

If that weren’t enough, Morrison throws another wrinkle for Batman readers to mull. If you’ll remember back in DC Universe #0, as well as the Batman R.I.P. arc, Joker was seen dealing a deadman’s hand to Batman upon a visit to Arkham Asylum, the significance of which we saw develop throughout R.I.P. What’s interesting here is once we travel further ahead in time to the wild west where we meet up with Jonah Hex, we see the same hand laid out in front of Hex on a table. The difference however now is the colour of the suits; they’re all black as opposed to red and black. The real kicker though is the close-up of Hex as he tosses a lone joker card, the wildcard, onto the table as well. I’m not sure what Morrison is implying with this, but I’m intrigued a little.

In what started off slowly, the series has picked up since issue one as Morrison and company turned in the best issue of the mini-series to date. Although I’m not sure how I feel about Bat-Zorro yet on the final page, I’m still looking to see how this all plays out as we get closer to the climax of what’s turning out to be a definite hit for Morrison.